Berlin rabbi: Jewish leaders need to help save the EU 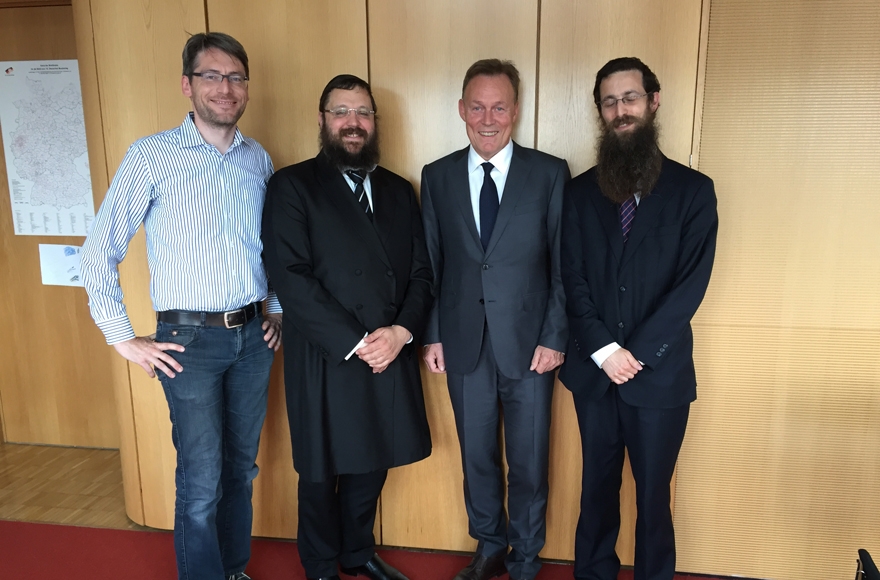 (JTA) — A prominent rabbi in Berlin called on other Jewish community leaders to do everything in their power to prevent additional countries from leaving the European Union after Britain’s vote to exit the bloc.

Yehudah Teichtal, a rabbi of the Jewish community of Berlin, made the call Tuesday in a statement about his meeting with Thomas Oppermann, the head of the German Social Democratic Party’s faction in the German parliament.

Teichtal told Oppermann that in his conversations with European rabbis and Jewish leaders he “encourages them to take action and prevent any further breaking in the EU,” the statement said. “I call upon the leaders of all Jewish communities around Europe to do whatever they can and execute all of their influence” to prevent additional exits, the rabbi was quoted as saying in the statement by his office.

“The establishment of the EU and the multi-cultural approach it symbolizes, contributes to the welfare of Europe’s Jewish communities”, said Teichtal, who is a Chabad-Lubavitch rabbi. “Therefore, the possibility of dismantling the EU and reverting back to nation states should worry all Jewish people around Europe.”

Teichtal’s statement follows the June 23 vote in Britain, in which 51 percent of voters supported a British exit, or Brexit, as British media has dubbed the initiative. While this issue has divided British Jewry, several European rabbis issued calls similar to Teichtal’s.

The president of the European Conference of Rabbis, Pinchas Goldschmidt, said last week that after Brexit, “we live in a new Europe.”

“The voices calling for the dismantling of the European Union are getting stronger and our continent is prone to more shakeups and changes,” he said.

Rabbi Mencahem Margolin, another Chabad rabbi and director of the Rabbinical Center of Europe and the European Jewish Association, said following the vote: “We have lost an important voice here in Brussels and across the continent as a whole. Brexit sees a number of threats from these parties who are licking their lips at the prospect of increasing power. It appears that Brexit has given them hope. And that is deeply worrying for Jews across Europe.”

Rabbi Yitzchok Loewenthal, a Chabad British rabbi who lives in Denmark, said following the vote:  “I would’ve preferred that they remain,” but added the European Union “needs to learn” to allow the peoples that make up the bloc to “be diverse, yet remaining connected.”

Only such an attitude, he said, would address the issue that the supporters of leaving the union have with the bloc, namely that “Brussels imposes laws for all its member states, and does not properly take into consideration the individual cultures and needs of the member countries,“ as Loewenthal described this attitude.

Judaism’s own attitude to these issues is reflected in the Menorah, he added, which “has different branches representing different attitudes, different traditions, and different personalities – yet they all face inward to the middle light symbolizing the light of God and the Torah.”