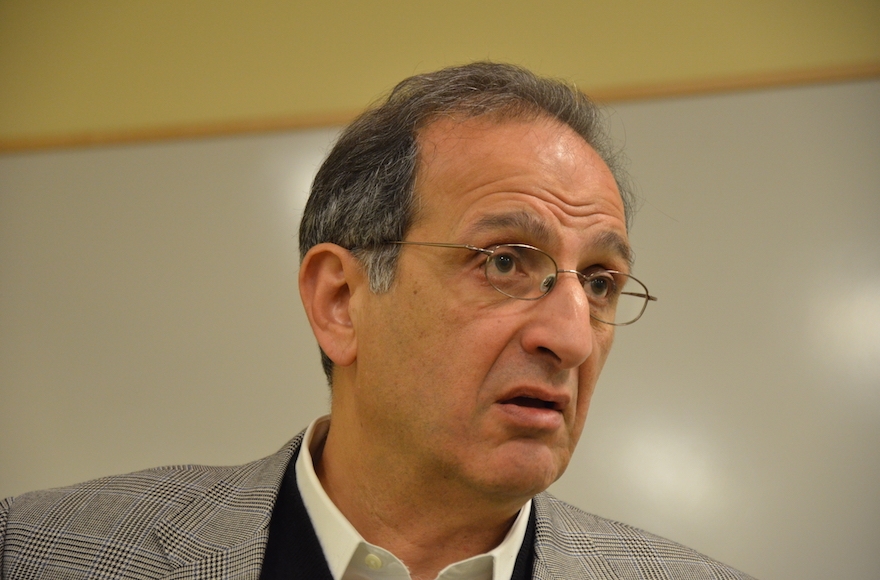 (JTA) — James Zogby, one of Bernie Sanders’ appointees to the Democratic Party’s platform committee, said he had been unfairly typecast as an anti-Israel activist.

“I’ve just been cast as the anti-Israel guy,” Zogby, the founder and president of the Arab American Institute, said in an interview published Friday in The Jerusalem Post. “People will type you.”

This view, which Zogby said does not reflect his views toward the Jewish state, “bothers me more than anything else [because] it fuels a simplistic, combative narrative,” he said.

As a member of the Executive Committee of the Democratic National Committee, Zogby has played a key role in attempts to include in the party’s platform language that recognizes Palestinian “dignity,” and opposes Israel’s “occupation” and “settlement activity” in what the proposed inclusions refer to as Palestinian lands, according to The Jerusalem Post.

The latest draft of the platform, which is set to be finalized in July, declares that achieving Palestinian statehood would provide “the Palestinians with independence, sovereignty, and dignity,” whereas previous formulations referred to a two-state solution as benefitting only Israel. A proposed phrase calling on Israel to end “Israeli military occupation and illegal settlements” in the West Bank was defeated last week in an executive committee meeting in St. Louis.

Zogby supports the rights of Americans to boycott products produced in the settlements. He also told The Jerusalem Post that Prime Minister Benjamin Netanyahu “does more to delegitimize the State of Israel than the BDS movement ever has.”

But, “On the issue of delegitimizing Israel, I object to language that ultimately crosses the line into anti-Semitism,” he said. “That language is offensive, its anti-Semitic and its hurtful.”

The son of Maronite Catholic immigrants from Lebanon, Zogby has become one of the most prominent voices for the Arab-American community. He has a son who is married to a Muslim and a daughter married to a Jew, he said.

“When you type me and reduce me to one thing– which is some ‘hater of’ or ‘threat to’ or ‘danger to’ Israel – then there are crazy people out there who will decide to do things,” he complained. He said he has received death threats. The Post article did not specify as to the nature of these threats.

In the 1990s, then vice president Al Gore tapped Zogby to help promote business investment in the Palestinian territories, in a project known as Builders for Peace. President Barack Obama has twice appointed him to serve on the US Commission on International Religious Freedom, in 2013 and 2015.

According to the Post, Zogby’s views are aligned with those of J Street, the Jewish organization which supports increasing international pressure on Israel to speed negotiations toward a two-state solution, which J Street says will benefit both peoples. J Street defines itself as a pro-Israel organization.

Zogby said his attempt to include language that speaks of Israel occupation reflects mainstream views. “There isn’t a president in the last 30 or 40 years who doesn’t call it an occupation,” he said, noting that consecutive Republican and Democratic administrations have also condemned Israel’s continued settlement activity in the West Bank.