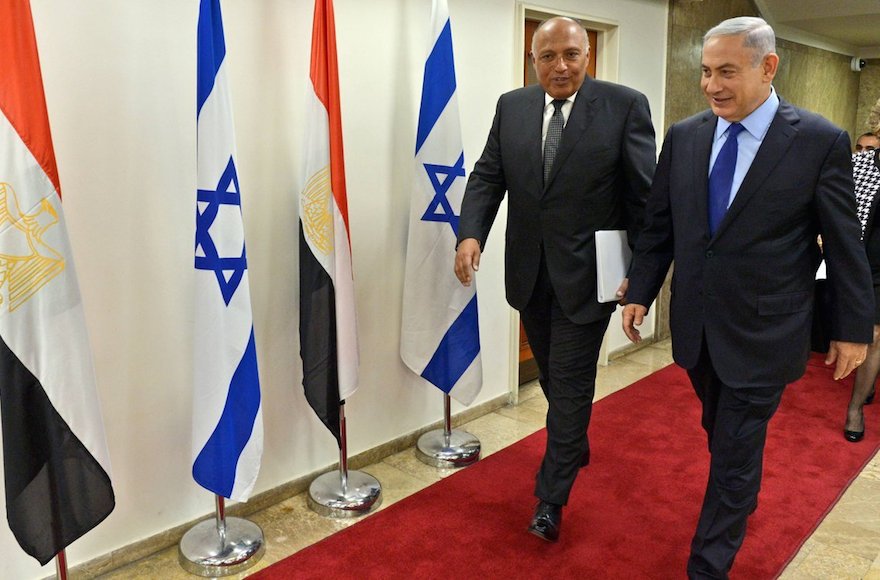 WASHINGTON (JTA) – The conventional wisdom has it that earning the sobriquet “the most right-wing government in Israeli history” does not lead to diplomatic successes.

In recent weeks, on the Turkish, Egyptian and African fronts, Prime Minister Benjamin Netanyahu is proving the conventional wisdom wrong.

How is it that the head of a government beating a hasty retreat from the two-state solution scored a triumphant tour of Africa, hosted a convivial summit with an Egyptian foreign minister for the first time in nearly a decade and renewed full ties with Turkey?

Here’s a look at what Netanyahu’s diplomatic successes mean – and their limitations.

Donald Trump, the presumptive Republican presidential nominee, talks about retreating from America’s preeminent role in the world. Although he is adamant that he is pro-Israel, Trump has suggested he could charge Israel for the billions in defense assistance it receives.

Similarly Europe, overwhelmed by a refugee crisis, is becoming more insular and, for the first time in decades, faces the prospect of falling apart as a common political force, with Britain’s planned exit from the European Union and other countries contemplating similar actions.

Meantime, calls to target Israel – or its settlements – with boycotts are increasing across the continent.

“In Israel, there’s broad recognition for no substitute for the U.S-Israel alliance. It remains crucial,” said Jonathan Schanzer, a vice president at the Foundation for Defense of Democracies, a think tank with a focus on the Middle East. “There’s also a recognition that we are going through a turbulent period, and from a diplomatic perspective there are ways to defray some of these challenges.”

Among them: Enhance security ties with Egypt, reinvigorate decades-old ties in Africa and mend ties with Turkey.

The vastness of Egypt’s Sinai peninsula, its strategic positioning between Asia and Africa, and the porous nature of its Red Sea and Mediterranean Sea coasts have been like catnip to terrorist groups like al-Qaida and the Islamic State.

That poses a shared challenge to Israel and Egypt, and has helped already friendly ties between the nations; Israel was one of the few countries to celebrate the 2013 coup that removed the Muslim Brotherhood-led government and brought to power Egyptian President Abdel Fatah al-Sissi.

Israel in recent months quietly has allowed Egyptian forces entry back into the peninsula, effectively allowing Egypt to abrogate one of the tenets, demilitarization, of the 1979 Camp David Peace Agreement. Commensurately, Egypt has allowed Israel to target terrorists with drones.

“You have a closely coordinated counterterrorism strategy in the Sinai,” Schanzer said. “You have intelligence sharing, increased numbers of Israelis are operating in the Sinai.”

That helps explain why Sissi was willing to send his foreign minister, Sameh Shoukry, to Israel this week for a high-profile visit – effectively warming up a peace that Sissi’s predecessors preferred to keep cool. Keeping the Sinai secure trumped the domestic blowback Sissi knew he would endure for the visit.

Preempting the Palestinians, France and (maybe) the Obama administration

The French are trying to kick-start peace talks with the Palestinians under an international umbrella. The Palestinians hope to advance statehood recognition during the U.N. General Assembly launch in September. And President Barack Obama may deliver his own post-U.S. election surprise, setting out the U.S. parameters for a final-status arrangement.

All are anathema to Netanyahu, who favors direct talks with the Palestinians, where Israel is able to exercise greater leverage. Shoukry, the Egyptian foreign minister, appeared to favor the direct talks track, saying his visit was part of Sissi’s “vision for establishing peace between the Israeli and Palestinian peoples — bringing this long conflict to an end.”

Bringing Egypt into the configuration increases pressure on the Palestinian Authority president, Mahmoud Abbas, to return to direct talks, said David Makovsky, a fellow at the Washington Institute for Near East Policy. Egypt is the P.A.’s lead patron in the Arab world, and Abbas can ill afford to alienate Sissi.

“While the PA president has had no problem rejecting Netanyahu’s call to resume talks amid disbelief that anything concrete will emerge from them, bringing Egypt into the picture raises the cost of any such rejection,” Makovsky wrote on the think tank’s website.

Turkey is more about what Erdogan needs

Recep Tayyip Erdogan, Turkey’s president, pressed for the rupture with Israel in 2010 after Israel’s deadly raid on a Palestinian convoy aiming to breach Israel’s blockade with Gaza. Now he’s the force behind the reconciliation.

Erdogan is dealing with restive Kurds in the south, the chaos in Syria across his country’s border and the blowback from his decision recently to take tougher measures against the Islamic State. He needs to smooth waters elsewhere.

Reestablishing ties with Israel not only returns an important trade partner to eminence and restores full security ties at a time of crisis, it addresses a longstanding U.S. demand that its two most important allies in the Middle East reconcile.

“Erdogan is starting to realize he’s overstretched; Turkey is dealing with so many problems at once,” said Ilan Goldenberg, the director of the Middle East Security Program at the Center for a New American Security think tank. “Erdogan is realizing he has to pull back.”

The last time there was a movement on the rise to isolate Israel — in the wake of the 1973 Yom Kippur War, when the Arab League used oil leverage to pressure third parties to join their boycott — Israel countered by quietly reinforcing ties in Africa.

The ties, established in the 1950s and 1960s, already were a point of pride for Israel, identifying the Jewish state not as a colonial anomaly, as the Arab nations would have it, but as a postcolonial triumph of an indigenous people.

That very much was the point of Netanyahu’s four-nation African tour, said Schanzer.

“One gets the sense we’re revisiting history amid the new boycott movement — and it’s yielding dividends,” he said.

The tour coincided with the 40th anniversary of an Israeli commando raid on Entebbe in Uganda, where terrorists were holding Israeli airplane passengers with the sanction of the country’s then dictator, Idi Amin. Netanyahu’s elder brother, Yoni, was killed leading the rescue effort.

But the tour was more than symbolic, participants said. Netanyahu traveled with 80 men and women representing some 50 businesses, and was well prepared to assist them, according to Yosef Abramowitz, CEO of Energiya Global Capital, a Jerusalem-based solar energy and social development enterprise.

Abramowitz said he shook hands on $1 billion worth of deals during the four-nation tour.

“A fully coordinated government initiative brilliantly executed in every country by the Prime Minister’s Office, the embassies and the Israel Export Institute, it was clockwork,” he said.