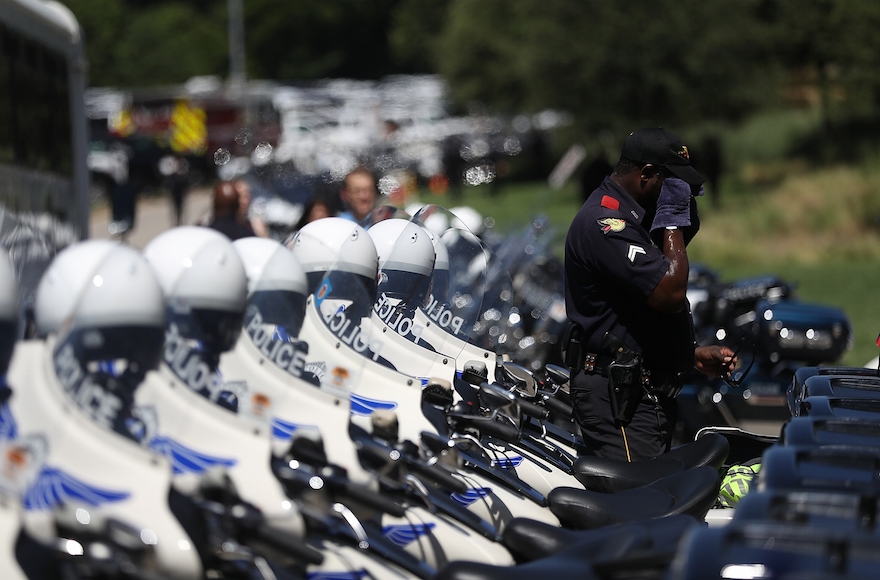 (JTA) — As the fast day of Tisha b’Av approaches, the summer heat and humidity is rising.

That got me thinking: Does the solemn day have the stuff to raise our consciousness as well?

Tisha b’Av — this year it begins on the evening of Saturday, August 13 — marks the destruction of the First and Second Temples, as well as other tragedies that have befallen the Jewish people. Traditionally, it’s a time to remember and mourn those events, and that Jews have been a historically oppressed people.

But this summer — perhaps more than any other in recent memory — I wondered if there was room to remember the struggles of others on this mournful occasion. On this sad day — when we are not supposed to eat, drink or have sex — it’s hard to ignore those in our own time who are experiencing tragedies as a people, or whose lives are being destroyed, some more than others.

Tisha b’Av is a day to reflect on the lasting damage of violence — both of police officers slain and the too many black men who have fallen victim to police violence. Do we pass over them on this day, and focus solely on our own grief? Or do we take a more universal view of Tisha b’Av, and use the day when we are already grieving to find a way to respond to the tragedies around us?

The day’s liturgy pushes us toward our own present-day cities and communities. The Book of Eicha, or Lamentations, which is traditionally read on this day, calls to us from across the millennia, shifting our attention to the now. When he hear the opening line about Jerusalem — “Alas! Lonely sits the city” — we could just as easily be talking about Dallas, or Baton Rouge. The next verse, “Bitterly she weeps in the night,” reminds us of the tears shed over the shootings of black, unarmed men.

Some have already heard that call. At an evening vigil in New York last month, organized by Jews for Racial and Economic Justice — a group which says it is “inspired by Jewish tradition to fight for a sustainable world with an equitable distribution of economic and cultural resources and political power” —  Shoshana Brown, a Jew of color and a JFREJ leader said, “As we enter the weeks leading to Tisha b’Av, this is a sacred time for Jews to take a stand against atrocities happening right now, as we also remember those that have happened to us in the past.”

To me, Brown is suggesting Tisha b’Av can be a remembrance that recalls both the ancient as well as the “right now.” But what would that look like?

There is a tradition, after the final meal and before the Tisha b’Av fast begins, of partaking in a Seudah HaMafseket, a spare “separating meal” consisting of water and a hardboiled egg and bread dipped in ashes, which is eaten in solitude, creating a space for contemplation. (Though this year, because the Ninth of Av falls on Shabbat, the fast is delayed. So while the final meal is unrestricted, the custom can still get us thinking about our current social turmoil.)

Why these foods? The humble egg reminds us of how hard life can become — and I think, how hardened we, too, can get to the conditions and injustices that surround us, to the point where we live in a shell. (Do we really understand just how dangerous it is for law enforcement to go out on the streets in our armed society? In a world where eyes have been culturally trained to surveil any person of color, do we really understand what it’s like to be constantly under suspicion?)

Tasting the bitter ash, itself a product of destruction, allows us to consider the consequences of living a life based solely on Hillel’s maxim, “If I am not for myself, who will be for me?” that then ignores the remainder of the famous phrase,“But if I am only for myself, who am I?” and “If not now, when?”

Fasting on Tisha b’Av, too, takes us out of our comfort zone, allowing us to clear more than our stomachs. Traditionally, we fast to mourn the destruction of the First and Second Temples, and the conditions of baseless hatred which led up to those terrible acts. But on this very long day of going without food or water, waiting for the sun to set, who does not have the time to reflect upon the baseless hatreds, both racial and ethnic, that roil our own times, in our own cities? At a moment when I am contemplating the loss of the Temple, will an image form as well of police battling protestors of recent shootings ?

Fortunately, however, Tisha b’Av isn’t just about sitting around and being sad. It’s also traditional to give tzedakah and spread a little hope. On this day of remembering tragedy, we can also use our funds to respond to crises in our midst.

Tisha b’Av and our history teach us to recover from destruction, to mend the broken. For example, after the killing of five police officers in Dallas, Texas, Congregation Ohev Shalom there raised over $2,000 to help one of the families of the officers slain. JFREJ has worked for police accountability and reform.

In Eicha, too, hope can be found. Though our national text of pain is filled with death, anger and “harsh oppression,” by its end, we see that our days can be renewed “as of old!”

But that doesn’t happen automatically. Eicha says we can “search and examine our ways” — meaning, with some introspection combined with some action, we can all return to the guiding Jewish principle to love and respect our neighbors as ourselves.

Opinion: Police, people of color and a Jewish dream of justice