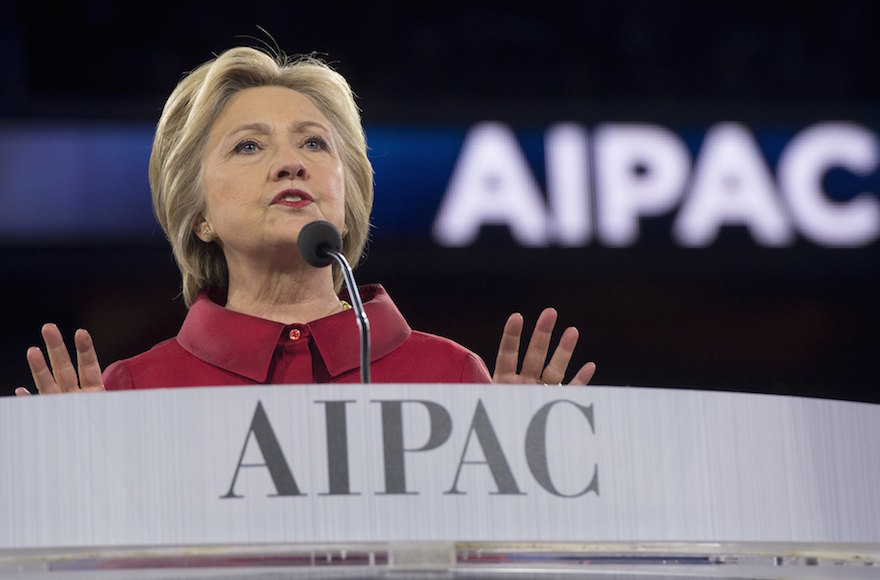 Hillary Clinton, in her first autobiography, “Living History,” embraces another label: “policy maker,” one she embraced after a particularly painful evolution in her political life. She describes her estrangement from her mentors Peter and Marian Wright Edelman, children’s rights advocates, in 1996, when she backed her husband President Bill Clinton’s enactment of welfare reforms.

“They genuinely believed the legislation was shameful, impractical and harmful to children,” Clinton wrote. “In the painful aftermath, I realized I had crossed the line from advocate to policy maker,” one who was “bound to compromise.” (Clinton has since reconciled with the Edelmans, who have also been deeply involved in liberal pro-Israel causes, including the New Israel Fund.)

Examining what Clinton says and does, and how she makes policy, helps make clear her relationship to Israel and to Jewish Americans.

Clinton’s campaign describes her role in eventually bringing about the Iran nuclear deal while serving as secretary of state during President Barack Obama’s first term as one of “arm twisting.”

“As Secretary of State, Hillary Clinton twisted a lot of arms to build a global coalition to impose crippling sanctions and apply unprecedented pressure on Iran,” the campaign’s fact sheet says while quoting the conservative Wall Street Journal editorial page as crediting her with persuading Russia and China to join the sanctions regime that brought Iran to the table.

“Mrs. Clinton surely pulled out every stop to get Russia and particularly China — which initially welcomed the Turkish-Brazilian proposal — on board” with the sanctions, the Journal said at the time.

The sanctions regime is widely credited with paving the way for the Iran nuclear deal, which trades sanctions relief in exchange for rollbacks in Iran’s nuclear program. Of course, the deal — hammered out after Clinton’s tenure as secretary of state — was wildly unpopular with Israeli Prime Minister Benjamin Netanyahu and much of the pro-Israel establishment.

In a subtle bid to distinguish herself from her successor as secretary of state, John Kerry, and from Obama — and head off the deal’s critics — Democratic candidate Clinton has pledged to both police the deal with increased vigilance and confront Iran on other fronts.

“We can’t take our eye off the ball,” she said in January when the deal was formally implemented. “As president, my approach will be to distrust and verify. I will vigorously enforce the nuclear deal as part of a comprehensive strategy that confronts all of Iran’s negative actions in the region and stand side by side with our ally Israel and our Arab partners.”

Clinton extends that tough posture to defending Israel in a number of other arenas, saying she will stand up to the boycott Israel movement and will cut off any attempts at the United Nations to jump-start the process of recognizing a Palestinian state without Israel’s agreement.

Yet Clinton has also acknowledged that her facility for arm twisting can extend to Israel as well. In her second autobiography, “Hard Choices,” she recalls taking Netanyahu to the woodshed in 2010 after Israel embarrassed Vice President Joe Biden during a visit by announcing new building in a disputed part of Jerusalem.

“I told the prime minister that President Obama viewed the news about East Jerusalem as a ‘personal insult to him, the vice president and the United States,’” she recalls in the book, which was published in 2014. “Strong stuff for a diplomatic conversation, I didn’t enjoy playing the bad cop, but it was part of the job.”

It left its mark. Israel’s then-ambassador to the United States, Michael Oren, in his 2015 account of the U.S.-Israel relationship, “Ally,” recounts how “Clinton had excoriated Netanyahu for 45 minutes over the phone, rebuking him for humiliating the president and undermining America’s ability to deal with pressing Middle East issues.” Oren went on to warn a Clinton underling, “Israelis, then, will see this as nothing but a pretext to arm-twist us and beat up on us.”

The friend, sometimes loyal to a fault

Clinton’s closest relationships are with those who stood by her through hard times, particularly the scandals and political battles that plagued her husband’s presidency.

That extends not just to her Jewish friends but to her Jewish family. Rep. Marjorie Margolies, D-Pa., cast the deciding vote in 1994 passing President Clinton’s unpopular budget, even though she knew Republicans would use it against her in the midterm elections. They did and she lost after serving a single term.

Her sacrifice helped spur a fast friendship between Margolies and the Clintons, and their kids became close, too: Chelsea Clinton married Margolies’ son, Marc Mezvinsky, in 2010.

Sidney Blumenthal, the one-time journalist turned trusted political adviser during Bill Clinton’s impeachment hearings, is another close Jewish friend that Clinton has said she will never abandon – notable because of how polarizing he is.

The White House nixed Clinton’s bid in 2009 to hire Blumenthal when she was secretary of state, in part because he was believed to be behind some of the most toxic opposition research when Clinton and Obama squared off for the presidential nomination just months earlier.

Nevertheless, she continued to solicit advice from Blumenthal, particularly on the Middle East, where his consultancy had clients. His views on Israel jibed with those of J Street, the liberal Middle East policy group. According to emails released as part of a probe into her use of a private server, Blumenthal in 2010 advised her to favorably mention the group at the annual conference of its arch-nemesis, the American Israel Public Affairs Committee, as a signal to AIPAC that it was no longer a monolith when it came to Israel policy.

She did not take his advice, nor did she in the same year when he urged her to heed a Financial Times op-ed that called for the United States to “demand” Israel end the occupation.

Clinton also praised articles by Blumenthal’s son, the anti-Israel journalist Max Blumenthal, according to the emails, and refused calls to repudiate the younger Blumenthal — until July, when Max Blumenthal derided Elie Wiesel upon the death of the Holocaust memoirist and Nobel Peace laureate.

That was a bridge too far for Clinton.

Wiesel, as Clinton recalled in “Living History,” had offered her his support during her darkest hour, her husband’s impeachment for lying under oath about an affair he had with a one-time White House intern, Monica Lewinsky.

“He greeted me with a long hug and asked, ‘What is wrong with America? Why are they doing this?’” she wrote.

Wiesel and his wife, Marion, offered their support.

“Their understanding was the greatest give they could give,” Clinton wrote.

In 2001, prosecutors investigated commutations her husband gave to four residents of the Hasidic community in New Square, New York, who had been convicted of defrauding the government after the profoundly conservative community voted overwhelmingly for Clinton in her successful 2000 bid for the U.S. Senate. The U.S. attorney in Manhattan wanted to know if the pardons were a quid pro quo for community support, although the Justice Department, under George W. Bush, ultimately declined to file charges against Bill Clinton.

Those charges of horse trading, however, seemed an emblem of Clinton’s evolution from the purist whose bid as first lady to reform health care fell flat on its face to the senator with a reputation for reaching across all aisles to all comers — or doing and saying anything to win a vote or policy battle, as her critics charge.

It’s a posture that extends to donors to the charitable foundation that she, her husband and daughter head. Pro-Israel critics fret about major donations from the Saudi Arabian government and its billionaires. Other funders are well known in the pro-Israel community, including diet magnate Daniel Abraham and entertainment mogul Haim Saban.

Accusations of Clintonian cronyism were a hallmark of Sen. Bernie Sanders, I-Vt., campaign against Clinton until he endorsed her last month as the nominee. Sanders singled out Clinton during the debates for her praise for Henry Kissinger, the secretary of state to the Nixon and Ford administrations seen as responsible in part for massive bombings in Southeast Asia and for backing Latin American fascists.

Clinton, in her defense, said Kissinger could not be defined only by his bad deeds, noting his work in defusing tensions with China.

“It’s a big complicated world out there,” she told Sanders.