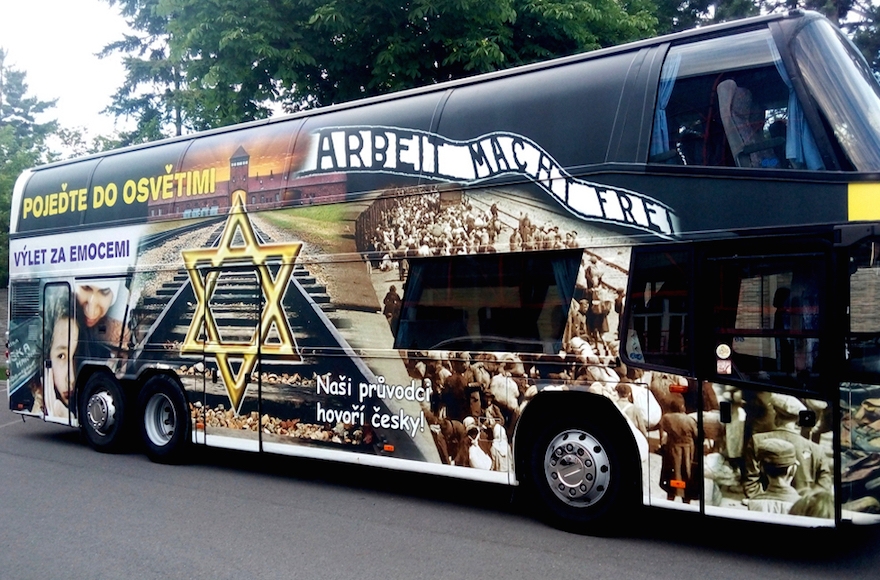 PRAGUE (JTA) — The owner of a Czech tour bus that advertised the Auschwitz extermination camp as an emotion-packed holiday destination will remove the vehicle’s controversial design showing oversized pictures of inmates from the Nazi extermination camp and a massive yellow Star of David.

The action comes following an outcry from Czech Holocaust survivors and Jewish leaders.

“I’m taking it off today and tomorrow, and it will be gone,” the owner of the tour company that operates the bus, Svatopluk Strava, told JTA on Thursday. “Most of it has been removed already.”

The design completely covered the vehicle. Along with the inmates’ photos and the Star of David, it featured a picture of the notorious Arbeit Macht Frei (Work Sets You Free) inscription as well as the slogans “Let’s Go to Auschwitz,” “A Journey through Emotions” and “Our Guides Speak Czech.”

The design was applied in June when the vehicle, owned by Balkanbus, a small tour agency based in Blučina, some 135 miles southeast of Prague, was used as a prop in a “stylized documentary” depicting the life of a Czech neo-Nazi and his family. The film, titled “The World According to Little Dalibor,” includes a scene of the main characters visiting the Auschwitz memorial, according to the film’s director, Vít Klusák.

“While working on the scene, we came across the strange world of the adventure tourism industry in the former death camps,” Klusak told JTA. “Our bus was a critical reflection of this phenomenon. I think it is extremely absurd and tasteless that Auschwitz and Terezín are being advertised just like Disneyland or Niagara Falls.”

After the filming concluded, however, the filmmakers and the bus owner failed to make sure the satirical design was taken down. Klusák said the  producers would pay for the removal, but Strava was concerned the paint on the bus could be damaged in the process and decided to keep the design. He used the bus for several trips to Auschwitz, but soon heard from the Czech Jewish leaders.

“We wrote letters in mid-July to the film production company and to the bus operator telling them that we considered the design of the bus offensive and tasteless, and we asked the bus owner to remove it,” said Petr Papoušek, the head of the Federation of Jewish Communities of the Czech Republic. “But we didn’t hear back from either of them, and we were considering legal action.”

“I didn’t realize it was going to be such a scandal,” he said. “I’m no Holocaust denier, I regularly take Czech schoolchildren to Auschwitz, and I always get goose bumps thinking of what had happened there. So I just removed it, and if the paint is damaged, I’ll be considering suing the filmmakers for the costs.”