At 80, a Munich Olympics and Holocaust survivor is still the sportsman 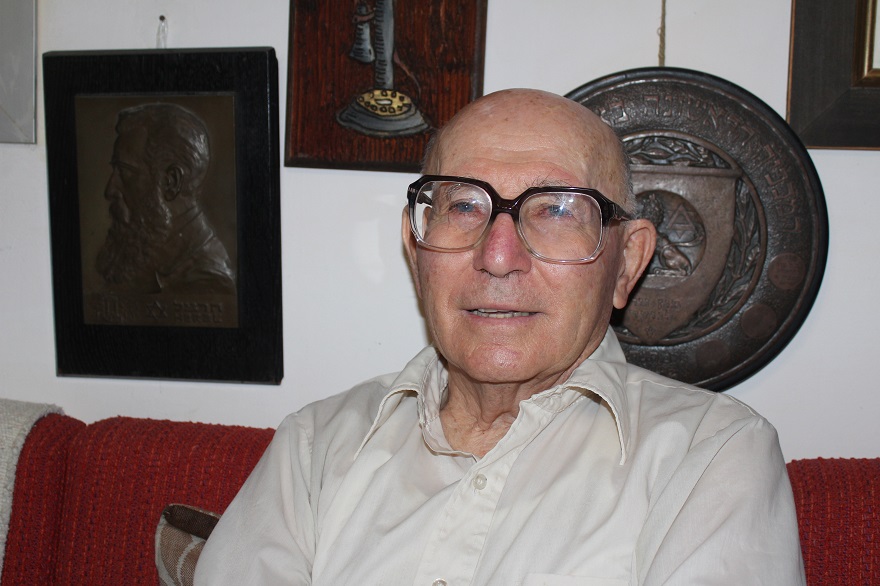 Shaul Ladany in his home near Beersheba with a prized piece of his Theodor Herzl collection, left. (Hillel Kuttler)
Advertisement

OMER, Israel (JTA) – Shaul Ladany, a two-time Olympian, acknowledged that he was “very happy” that the International Olympic Committee finally held an official memorial for the 11 Israelis who were killed in a terrorist raid at the 1972 Munich games.

But Ladany, an Israeli racewalker who still holds a world record, didn’t need the Aug. 3 ceremony at the Rio games to remember the tragedy. He was there, forced to flee the dorms where the Palestinian terrorists held his teammates hostage.

“I remember everything that happened in Munich. I don’t need special memorial services to remind me,” said Ladany, who watched clips of the ceremony on the TV news. “What the [Rio] event did, though, was to mark the IOC’s recognizing that this was part of the Olympic movement and that the Israelis and others must be remembered.”

He added: “Anyone with a head on his shoulders, and especially Israelis who were there, wanted this [commemoration] very much.”

The ceremony, held two days before the Olympics opened in Rio, culminated a 44-year struggle by victims’ families to attain official recognition of their loved ones.

“I think a big reason for that [breakthrough] is that the president of the Olympic movement is German, and he understands his obligation,” Ladany said of Thomas Bach, adding that he hopes such commemorations are held at every Olympics.

Even before Munich, Ladany was no stranger to survival, having made it through the Bergen-Belsen concentration camp during World War II as an 8-year-old.

In September, he will participate for the 55th year in a 2 1/2-mile swim in the Sea of Galilee – a number he thinks has been exceeded by only three people. And in November, Ladany plans to compete in a 20-mile walking marathon in the Jezreel Valley.

“I’ll be the oldest one there, of course,” said Ladany, a professor emeritus in industrial engineering at nearby Ben-Gurion University of the Negev who isn’t shy about speaking.

This summer he participated in two four-day, 84-mile walk races in the Netherlands. He competed for the 23rd time in the one held in Nijmegen, which Ladany calls “the greatest walking carnival in the world.”

In 2012, he interrupted a speaking tour in Canada to return to Israel long enough to make the Galilee swim, then flew back to resume his talks.

“Only a crazy, sports-minded person would do it,” said Ladany, sitting in his living room across from his wife Shoshana, 82, in an interview at his home in this Beersheba suburb.

Ladany, adjusting his enormous eyeglass frames, jokes that training for each Galilee swim consists of his previous year’s participation.

“I’ll tell you something about long-distance competition: Everyone – runners, cyclists, race walkers – don’t enjoy making the effort,” he said. “They enjoy the finishing. That’s the happiness: that you were able to make it.”

Ladany’s been at racewalking for more than a half-century, ever since he participated in a four-day recreational event as a Hebrew University of Jerusalem student and realized that many runners lagged behind his walking.

So how exactly does racewalking work?

Ladany explains that one leg must always be in contact with the ground, the foot landing on the heel while the leg remains straight, and that leg staying straight until switching to a vertical position.

“Most people who walk are really running,” Ladany said.

During the Munich games, he was staying along with most of the Israeli delegation in the Olympic Village, at Connollystrasse 31. When members of the Palestinian terrorist group Black September broke into his teammates’ rooms on the September morning, he was able to dash to safety.

Correcting the historical record that claims he jumped to safety from a second-floor balcony, Ladany told JTA that he was on the first floor and stepped on the terrace and continued away to safety. He said two other Israelis fled serpentine-style to avoid being shot.

He has a theory for why the terrorists who invaded apartments 1 and 3 bypassed his duplex in apartment 2: His five suite mates included competitive sharpshooters Henry Hershkowitz and Zelig Stroch. All survived.

Ladany sees his Munich teammates at the annual commemoration in Tel Aviv of the murders. He recently had his watch repaired by Hershkowitz, a watchmaker.

Some three decades before his second Olympics, Ladany and his parents fled their native Belgrade, Yugoslavia, to Hungary following the Nazi invasion in 1941. They were deported to Bergen-Belsen, then freed in a December 1944 prisoner exchange and sent to Switzerland before returning to Belgrade.

In 1948, the family immigrated to Israel along with Ladany’s orphaned first cousin, Martha Flattow, who was raised as his sister and now lives in Rishon Lezion. The Ladanys’ daughter and three grandchildren reside in Reut, near Modiin.

“Maybe the events of my life shaped my character. I don’t know,” Ladany said.

He says that among the most profound utterances he has ever heard was the day his father dropped him off at the Israeli army induction center in 1954. Ladany recalls his dad telling him: “The honor has accrued to you to serve the Jewish state.” Ladany would repeat the phrase when his daughter was drafted.

On this morning, even though he has just 20 minutes before a department-wide event at his university, Ladany indulges a visitor’s approach to wall-length display cases packed with trophies and medallions. The octogenarian flicks on a backlight, the better for his accomplishments to be appreciated.

Athletic hardware isn’t all he stockpiles; Ladany is an inveterate collector. In fact, he notes matter-of-factly, he maintains 200 different collections, from what he calls the “esoteric and nonvaluable” (restaurant napkins and business cards) to the highly significant (Maccabiah posters, historical Jewish National Fund collection boxes, documents about Bergen-Belsen). He is one of the world’s leading collectors of items related to modern Zionism’s founder, Theodor Herzl: 1,000 pieces, including 400 postcards.

On the inside of the home’s front door hangs a 1932 poster from the inaugural Maccabiah – “I believe I’m the most knowledgeable person in the world about the first Maccabiah,” he states unabashedly – and, above it, a poster consisting of images of each delegate to the First Zionist Congress in 1897.

The pivotal gathering may have taken place in Basel, Switzerland, but Ladany owns an invitation that designated Munich as the original location. The congress was relocated, he explains, due to a rabbinical dispute.

Now Ladany finally makes it to his garage, dips into his car’s seat and tears down Eucalyptus Street. His leg may no longer be in contact with the ground, but it’s weighing hard on the gas pedal.