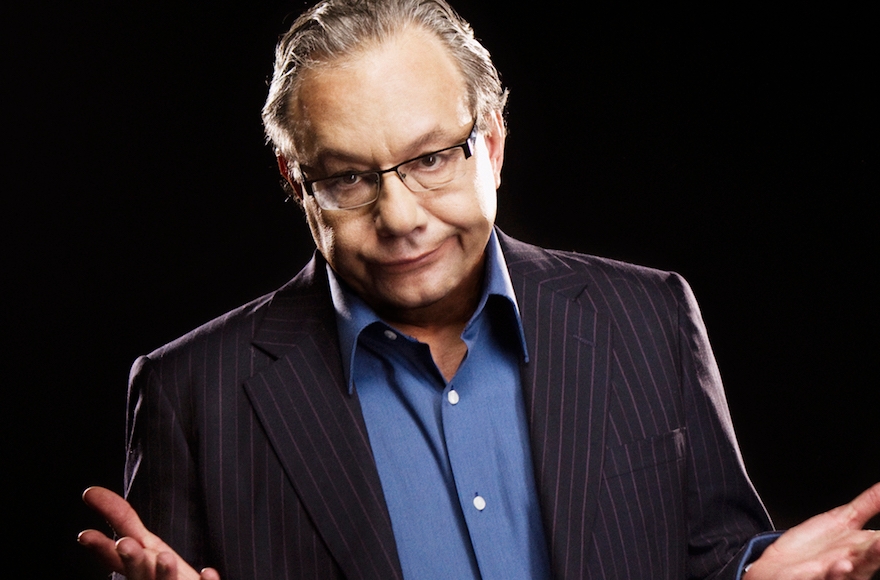 (JTA) — Remember Pixar’s 2015 film “Inside Out?” It was about an 11-year-old girl, Riley, and the five primary emotions raging inside her: Joy and Sadness, Fear and Disgust. And Lewis Black.

Sorry. We meant there was Anger. It’s an easy mistake to make.

From railing against AT&T (“it’s a [phone] carrier in the same way a mosquito carries malaria”) and high school guidance counselors (“I may as well have had a tortoise”), Black is the standard-bearer of comedic rage, his voice apoplectic, his hands shaking, frustration with the world’s indignities streaming from him like a hurricane-swollen creek.

Black, 67, after years as a comic, actor, playwright and producer of off-Broadway shows, rose to national fame thanks to his Back in Black segments on “The Daily Show,” offering choleric riffs on current events (as he’s always introduced, when a news item falls through the cracks, Black catches it).

Recently, for example, he riffed on newly released Osama bin Laden papers, including an application form for would-be martyrs. It asked them to list their hobbies and insisted on legible handwriting.

Black’s take: “You’re telling me you get a guy who’s willing to blow himself up, but you’re gonna turn him down because you can’t read his handwriting?”

The periodic gigs on the Comedy Central show led to more bookings, bigger venues and HBO standup specials, including one filmed at Carnegie Hall. Black has had several supporting roles in films and guest roles on TV, as well as a limited run on Broadway four years ago.

Black was Pixar’s first choice for the Anger role. Accepting the role was a no-brainer, he told JTA in a telephone interview. As he tells it, his agent called and said, “’Pixar called and would like you to play Anger.’”

“There literally was no pause,” he said. “I said ‘yes’ immediately, and they sent this incredible box filled with Pixar material and DVDs in case I wasn’t acquainted with the company.”

He continues: “They really showed a kind of humility you never see in the corporate films world. It was like, ‘we really hope you do this and deign to join the film.’ I got to go to Cannes. … I never thought anything I was part of would be shown at Cannes.”

Although Black may have been happy about that, he admits he didn’t have to stretch much to channel anger.

“The persona was part of me from the get-go, but I didn’t really discover it as a performer until later,” he said.

Black said he “fumbled around” early in his standup career.

“I talked a lot about my sex life,” he said. “Plus I didn’t perform for a while because I was much more dedicated to writing plays and doing theater.

“I was doing material that had a certain amount of anger, but I was sitting on the anger. That doesn’t make people laugh; it makes them uncomfortable. Then a friend of mine said, ‘You really ought to start yelling up there.’ That was revelatory.”

In addition to his appearances on “The Daily Show” and his standup TV specials, Black yells at his audiences some 100 to 120 times a year, touring the country mostly by bus — not because he’s afraid of flying, but because he’s “afraid of airports,” he said. “They’re horrible places to spend time.”

Counterintuitively, perhaps, the current political campaign has made his life more difficult.

“How are you supposed to satirize what is already satirical?” Black asked. “Almost everyone in the audience already has 300 Trump jokes, so you need another route.

“There’s one part of me that’s done with all that,” he adds. “I’m tired of listening to the same thing all over again. The Republicans believe the entrepreneurial spirit will create jobs and people will wander the earth and it will be happy time. The other side believes in government distribution and government stimulation, and they’re both right. Why don’t they just sit down and figure out what’s the best and compromise?”

It sounds somewhat reasonable, but as Black speaks, he is building a head of steam and there’s no way to stop him — not that I wanted to.

“In terms of Trump, this could lead to the ends of the earth,” he said. “It’s beyond human imagination that in a country of this intelligence that this would happen. That this is even a possibility. All of a sudden, Trump is making Mitt Romney start to look like Churchill.”

In a way, Black owes his talent to his parents, Jeannette and Sam.

But his dad is funny, too. His father was recently hospitalized, Black explained; a physician asked Sam a number of questions to check his mental status, including who was the president — at which point “my father looks at him like he’s Dr. Schmuck and says, ‘Of what country?’”

His family also influenced his relationship to Judaism: Growing up in Silver Spring, Maryland, Black had to attend Hebrew school until he was confirmed, then he could make up his own mind.

The family attended Temple Sinai in Washington, D.C., where the spiritual leader at the time was the famed Reform Rabbi Balfour Brickner.

“He inspired me; I really liked listening to him,” Black said. “A lot of these guys are stiffs, let’s face it.”

Around the time of his bar mitzvah, Black even considered following in Brickner’s footsteps and becoming a rabbi himself.

“I probably would have been a good one,” he said. But when Brickner moved to New York, he apparently took Black’s rabbinical aspirations with him.

Religion used to have a place in his routines.

“Only the Jews could come up with a holiday that is so depressing,” he has said of Yom Kippur. “The only people who’ve taken this a step further are the Muslims, who take chains and actually beat themselves.

“I’m surprised the Jews didn’t think of that. But we don’t work well with tools.”

More recently, though, Black used his Judaism to accentuate a joke.

“It’s a trump card I use when I talk about economics and finance in my act,” he said. “I point out, ‘I’m telling you this as a Jew.'”