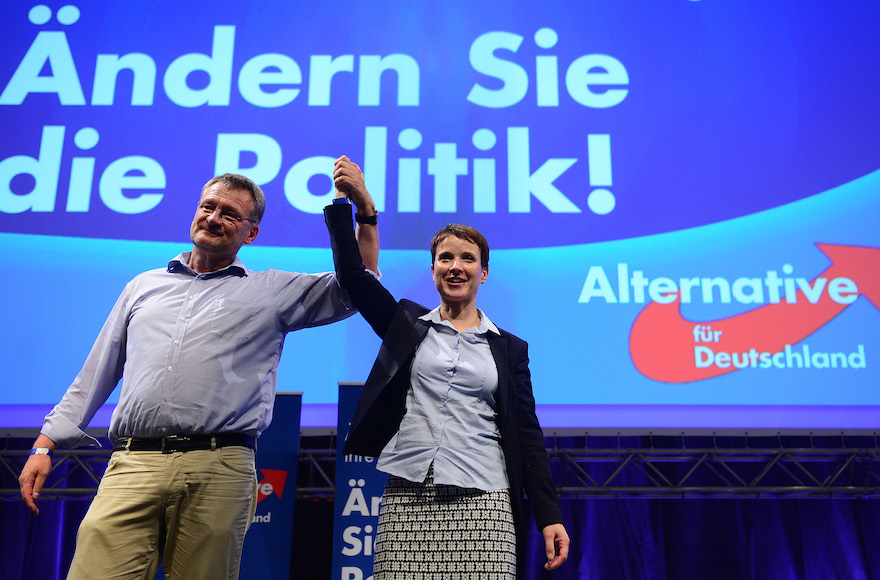 BERLIN (JTA) — In what one German Jewish leader is calling a “Nazi renaissance,” Germany’s newest right-populist party — Alternative for Germany — has broken the Berlin barrier, gaining seats for the first time in that state’s parliament.

The anti-immigrant, Euro-sceptic party, which has been plagued by controversies over anti-Semitism in its ranks, finished fifth in Sunday’s vote with 14.1 percent. AfD, as the party is known, now has seats on legislatures in 10 states following several elections this year. The party was founded in 2013.

Winning the Berlin election was the Social Democratic Party, which retained power over the party of German Chancellor Angela Merkel, the Christian Democratic Union, with 21.6 percent of the vote to 17.5 percent.

AfD leaders were jubilant at the prospect of occupying 25 seats out of 160 in the state parliament of Germany’s capital.

The elections are seen as a litmus test for Merkel’s controversial refugee policy, with more than 1 million asylum seekers having entered the country from war-torn countries in the Middle East and Africa.

The head of the Central Council of Jews in Germany, Josef Schuster, told the German news media Sunday that the results were worrying.

A former council president, Charlotte Knobloch, who heads the Jewish Community of Munich and Upper Bavaria, issued a statement Sunday urging Germany’s “Democratic parties to make good use of the time between now and the next elections in 2017 to stop the Nazi renaissance.”

Three additional states will hold elections in the first half of 2017, followed by national parliamentary elections in September.

Knobloch, who survived the Holocaust in hiding as a child in Bavaria,  called AfD “a party that incites against minorities in a disgusting manner, that wants to make National Socialist terminology and approaches acceptable again, that is unable to distance itself credibly from neo-Nazis and Holocaust deniers.” She said its gains in state parliaments are a “true nightmare.”

If the established parties don’t manage to gain support by the national elections next year, Knobloch warned, “I fear for the good and peaceful future of our country.”