Arab lawmaker Aymen Odeh wants to save the Israeli left, but not join it 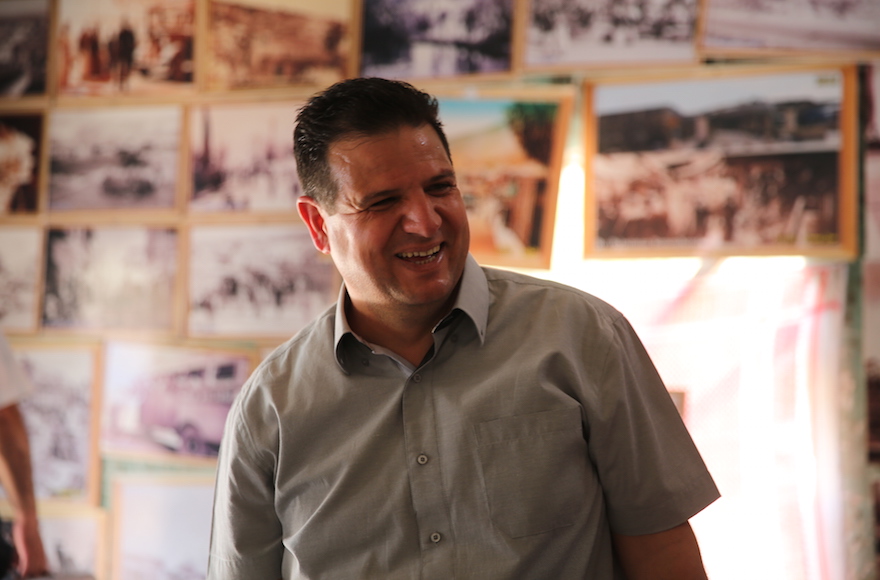 He is the first person to represent all of Israel’s Arab political parties in the Knesset, or parliament. The parties, whose members range from secular communists to pious Muslims, came together as the Joint List to run in the 2015 election. The merger gave them the votes to claim more seats in the legislature.

Under the leadership of Odeh, a 41-year-old lawyer who came out of Haifa politics to become chairman of the Hadash party, the Joint List won 13 seats, making it the third largest party in the Knesset. It was in part the specter of increased Arab-Israeli clout that caused Prime Minister Benjamin Netanyahu to warn in the final days of the campaign that Arabs were “voting in droves.”

Though liberal American Jews and the U.S. media have embraced Odeh, a secular Muslim and Arab moderate, Israeli politics have proved more trying. During the Joint List’s first Knesset session, which ended in August, members of the Arab nationalist Balad party came under fire for visiting the families of Palestinian terrorists and calling Israeli soldiers “murderers.”

The Joint List was met with populist attacks in the Knesset plenum, including from Netanyahu, and a new law allowing the Knesset to impeach lawmakers who support armed struggle against Israel or incite racial hatred.

Lest Odeh enjoy his summer vacation too much, Israel Police arrested more than 20 activists and members of Balad last week, saying an investigation had revealed fraud by the party.

Odeh sat down with JTA on Monday in a borrowed Tel Aviv office to talk about his political views and plans, including to partner with the left to unseat Netanyahu — though he said the Joint List is not ready to break the longstanding Arab tradition of staying out of the government. The conversation has been edited for length.

JTA: As both a Palestinian and an Israeli, how much of the Zionist narrative do you accept?

The idea that anti-Semitism is something that will stay forever, and this is why the Jewish people can’t live with other nations, this is something that in my very core I resist. This is an example of something in the theory that I can’t accept.

When we talk about the practice of Zionism, the first thing that I can’t accept is the Nakba. The Nakba, where 90 percent of our people either escaped or were expelled during war [in 1948], and lost everything — lost their homes, lost their land. This is our catastrophe, the catastrophe of the Palestinian people, and this is one of the first results of Zionism.

But I do accept that the Jewish people are a people and they deserve self-determination. I do accept that. I understand that there is no modern country that was established without sin, without inflicting any pain. For example, your country, the United States, and Canada, the same.

But I think countries that recognize the wrongdoings of their past, in the end it makes them stronger. I don’t think it can harm in any way the legitimacy of Israel or any other country. I think when you acknowledge your sins, it just makes you more legitimate.

Your question is about symbols. But I’m not a man of symbols; I’m a man of content. When we get stuck on the symbols, on the slogans, this is mainly the discussion of people who don’t want to find solutions.

Are you focused on equality for Arab Israelis?

Our situation is very complex. It’s not only equality that we seek. I want the end of the occupation and the establishment of a Palestinian state alongside the State of Israel. I want equality for the Arab citizens of Israel. I want social justice for all people. I want full equality between men and women and sexual orientations. I want to protect the environment.

I am a citizen, but I’m also a Palestinian, and first and foremost I’m a human being. In the government, and in the right wing in general, they don’t recognize me as either.

Both people here are full of pride. We both come from rich histories. The Jews are the people of the book, the people of the prophets, the Nobel Prize winners, the intellectuals like Marx, Freud, Kafka, Spinoza, Einstein. The biggest of them all.

And the Arabs were the masters of the world, even more than the Roman Empire, more than any other empire in the history of mankind. They built civilization and the beginning of knowledge.

The Jewish people here are the stronger people now. But they still feel afraid in some way. And the Arabs are now the weaker party, but they still feel like they’re bigger. So the Jewish people as a majority act and feel in many ways like a minority. And the Arabs, who are a minority, feel like a majority. The government is even putting forward national laws that protect the collective rights of the majority, of the Jews.

Everything we said is in a way a small issue next to the big issue. I think the biggest thing for us is to believe in humankind. I know that when I speak, people sometimes think I’m naive. But think about someone going and trying to tell Martin Luther King or Malcolm X in 40 years you’re going to have a black president. That person would be perceived as out of his mind.

So do I think it can happen here? In a way, it has already started to happen.

I remember how much we hated Rabin when in the first intifada he called to break the bones of the Palestinian people. Two years after that he stood at the White House with Yasser Arafat, shook his hand and started a peace process.

This is why I think you can’t not believe. I come here to Tel Aviv. I walk the streets, I walk into this office. It’s mainly Jewish people, and we hug and we are friends. This is life. It’s stronger.

But the left that Rabin represented is gone. Why believe peace and equality are getting closer?

This is why one of the biggest tasks I have is to make the Arab minority be seen as an important electoral power that can shift the direction Israel is going.

Along with me, there is another person who understands the great power the Arab community holds. And this man is the prime minister, Benjamin Netanyahu. He doesn’t want us to be legitimized in the political arena, so we can’t take part in making decisions for the future of this place.

And you can’t convince me that they don’t exist, that 30 percent of the Jewish citizens of this country don’t want and believe in peace and equality. I can’t believe that.

How do you plan to legitimize Arabs as a political force in Israel?

I think this should be a project of all the parties in the opposition, not only ours. If they want to take back the government, they need to join us in that struggle, in legitimizing the Arab community. And if not, it’s not only us who are going to lose. They are going to lose, too. The only person who will succeed from that kind of scenario is Netanyahu.

This is something we are busy working on these days, meeting with all the parties in the opposition, trying to agree on some sort of platform on that issue.

First, all the parties of the opposition should just speak about that — that Netanyahu is trying to delegitimize the Arab minority, and they are citizens of this country, and they should be equal citizens of this country. And I think we can agree on a general point of peace and equality. I agree it’s only the general framework. When we go into the details, we do have disagreements, but I think we can agree on the framework.

Would the Joint List be willing to join the government, something no Arab party has done?

We were never part of the coalition. Only in the time of Rabin, we kept the government in power from the outside. We gave it a safety net. And I can tell you there is almost full agreement in the Arab community that this was the best time in the parliament for the Arab community. We are still not ripe to be part of the coalition. But if it will be dependent on us if the right will go back to government or not, we cannot sit on the sidelines. Is this answer enough?

I don’t know. It seems like a bit of a symbolic distinction for someone who is not a man of symbols. Are you personally ready to join?

The Arab community is not in the place for even talking about joining the government, or even thinking about it.

Don’t the words and actions of certain members of the Joint List make it hard to win legitimacy? I’m thinking especially of Balad.

At the end of the day, they believe in universal values. They struggle in democratic ways. They choose to go to the Knesset. They stand on the Knesset podium with all the Zionist symbols. This is why I will never accept the point of view that they’re extremists. And this is why I still believe they are really important partners within the Joint List.

Is violence a legitimate part of the Palestinian struggle?

I am condemning all the time. I want to say it as clear as possible: Every time you attack a civilian, you attack all of humanity. Harming civilians is not only morally wrong, it’s politically wrong for the Palestinians.

I think the soldiers don’t need to be there. But I see every person under the uniform. I see their mothers and fathers. The people who want to solve this issue and to end this violence, they need to end the occupation.