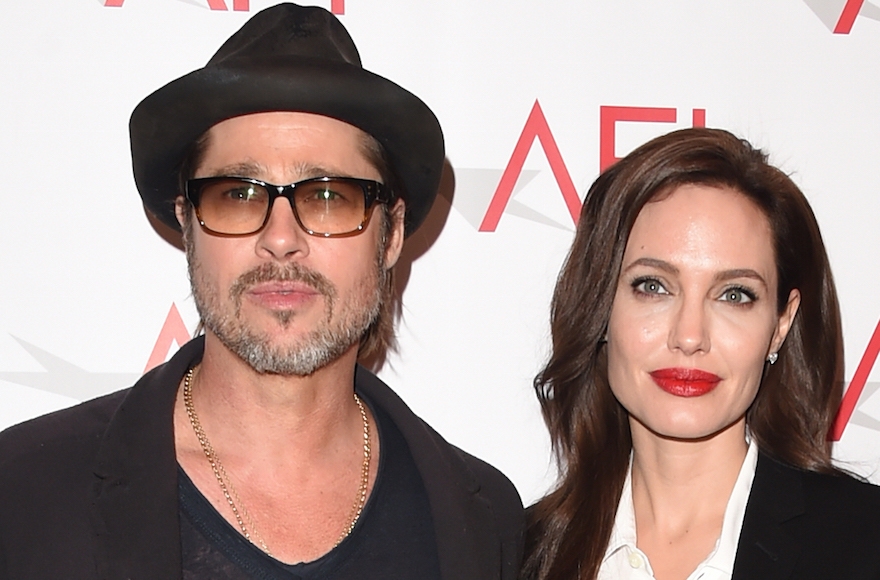 Brangelina, say it ain’t so!

Just about the entire world uttered a collective gasp on Tuesday morning, when the gossip site TMZ reported that Angelina Jolie filed for divorce from Brad Pitt. In contrast to prior rumors, TMZ’s sources say the rift developed over the way Pitt was parenting their six children (three are adopted) — along with “an anger problem” and possible substance abuse — and not over a mistress. The most “A” of Hollywood’s A-list had been a couple since 2004 and married in 2014.

While neither are Jewish, Pitt and Jolie have made their way into numerous Jewish stories over the past 12 years. Here are the highlights.

Superfans may know that the Jolie-Pitt twins were born on a Saturday — but few may have realized that the birth also coincided with the Jewish Sabbath.

“The delivery was very emotional and exceptional as Ms. Jolie is a superstar, but I think that it happened on Shabbat made it that much more moving,” Dr. Michel Sussman, a former vice president of Nice’s Jewish community, told JTA after the happy day in 2008.

Jolie’s father, Jon Voight, is best known as an Academy Award-winning actor who has starred in movies such as “Midnight Cowboy” and “Coming Home.”

But Voight, a lifelong Catholic, is also a big supporter of the Chabad movement — so much so that he’s hosted the Chabad fundraising telethon at least 18 times since the 1980s.

The actor has studied the works of the revered Lubavitcher Rebbe, Rabbi Menachem Mendel Schneerson, and can talk about Talmudic scholars with ease. In addition, Voight is a staunch advocate for the Jewish state, and appeared in a campaign ad for Israeli Prime Minister Benjamin Netanyahu last year.

Jolie has raised awareness of the ‘Jewish’ breast cancer gene

The actress made headlines in 2013 when she publicly revealed her decision to undergo a preventative double mastectomy.

“I have always told [my children] not to worry, but the truth is I carry a ‘faulty’ gene, BRCA1,” Jolie wrote in The New York Times.

The BRCA1 and BRCA2 genes are associated with Ashkenazi Jewish genetics — about 1 in 40 individuals of Ashkenazi descent (as opposed to about 1 in 500 in the general population) are carriers of the gene, which increases one’s risk of breast or ovarian cancer.

At the time, Jolie noted that Pitt was supportive of the elective surgery, and was a great help during her recovery.

It’s safe to say that Pitt has an above-average fascination with the Nazi era. He has starred in three World War II flicks in the past seven years —“Inglorious Basterds” (2009), “Fury” (2014) and “Allied” (set to come out in November).

After acting in “Fury,” he reportedly became “obsessed” with wartime memorabilia, and bought a 1942 motorbike for approximately $387,000 that was used by Nazis during reconnaissance missions.

At least Pitt has been the Nazis’ worst nightmares in all of three of the films.

Jolie’s Jewish divorce lawyer is the queen of celebrity splits

According to TMZ, Jolie is being represented by Laura Wasser, who is known in Hollywood as the “Disso Queen” (“disso” referring to “dissolution of marriage”).

She’s earned the nickname for a reason — she’s brokered countless high-profile divorce cases, including those of Ben Affleck and Jennifer Garner, Gwen Stefani and Gavin Rosdale, and Megan Fox and Brian Green. She must have done wonders for Jolie: Wasser previously represented her in her 2003 split from Billy Bob Thornton.