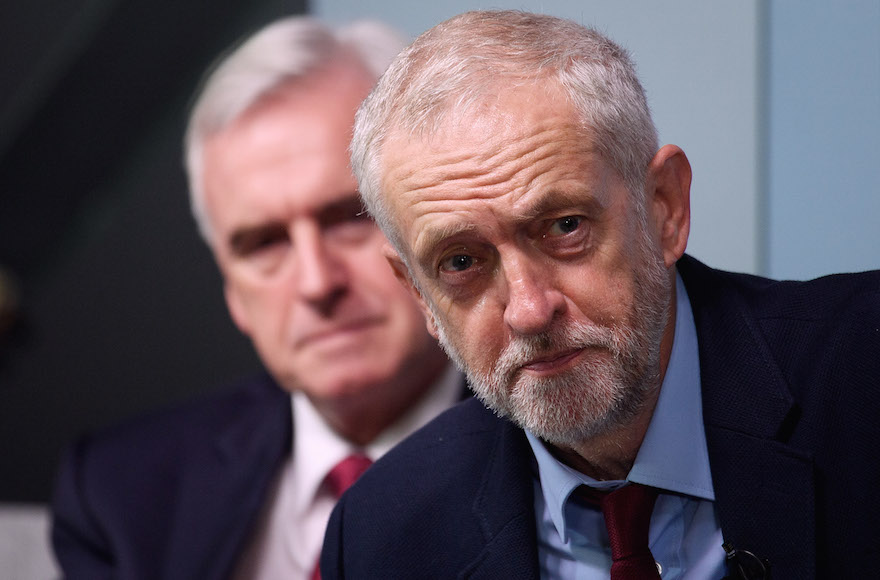 (JTA) — Jeremy Corbyn was re-elected head of the British Labour Party, leading to the resignation of a Jewish official from the party.

Corbyn handily defeated challenger Owen Wilson, 313,209 to 193,229, the party announced at the start of its conference on Saturday.

Parry Mitchell announced his resignation following the results. He had told the London-based Jewish Chronicle in August that he would no longer represent the party if Corbyn remained its leader.

Mitchell, who became a peer, or member of the House of Lords, in 2000, called Labour a “lost cause” and accused Corbyn of being “lukewarm” on tackling anti-Semitism. He also said Corbyn was surrounded by people with “violent anti-Israel views.”

“I’m Jewish and I’m very strongly Jewish and I make no bones about it and there’s no doubt in my mind that Jeremy himself is very lukewarm on this subject,” Mitchell told the BBC Sunday. “But even more than that, he surrounds himself with a coterie of people who hold violent, violent anti-Israel views and allied with it they are very hostile to Jews so, in my view, they’re pretty bad guys.”

In an op-ed in the U.K. Jewish News, Mitchell compared leaving his political party to divorce, saying “we are no longer compatible and it’s time to move on.”

He also wrote: “How can I, a Jew and a Zionist, remain in a party where the leadership is so clearly hostile to Israel (even to its very existence) and which also flirts with anti-Semitism? In the end it was an easy decision, but that makes it none the less painful.”