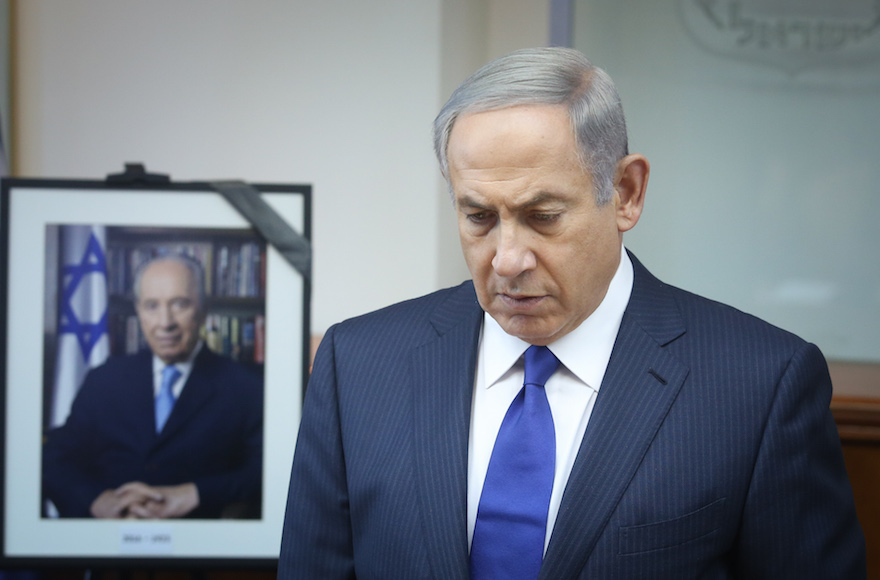 JERUSALEM (JTA) — At a special session to mourn and honor Shimon Peres, Prime Minister Benjamin Netanyahu told the Israeli Cabinet that the late president “did so much to protect our people.”

“This is the first day in Israel without Shimon Peres,” Netanyahu said at the opening of the meeting on Wednesday morning, followed by a moment of silence.

“In the name of the entire Jewish people, in the name of the citizens and government of the State of Israel, I also send deep condolences to Shimon’s family,” he said at the meeting in which he enumerated Peres’ accomplishments on behalf of Israel.

Netanyahu earlier released a statement in which he noted that Peres, who died that morning two weeks after suffering a massive stroke, “devoted his life to our nation and to the pursuit of peace.”

The prime minister wrote: “He set his gaze on the future. He did so much to protect our people.

“He worked to his last days for peace and a better future for all. As Israel’s President, Shimon did so much to unite the nation. And the nation loved him for it.

“His name will be forever engraved in the story of the rebirth of the Jewish people, as one of our great leaders, as one of the founding fathers of the State of Israel.”

Israeli Prime Minister Benjamin Netanyahu in a moment of silence, as a photograph of former President Shimon Peres is displayed behind him, in Jerusalem, Israel, Sept 28, 2016. (Marc Israel Sellem/POOL/Flash90)

Peres’ family announced his death at 7 a.m. Wednesday in Israel, several hours after his passing.

Chemi Peres, one of the late statesman’s two sons, thanked the nation and people around the world for their support and prayers on behalf of his father.

“You enveloped our father in love, and we know how much he loved you,” he said.

“Our father’s legacy has always been the future. Look to tomorrow, he taught us, build Israel’s future with courage and with wisdom and always continue to strive for peace. We were privileged to have been part of his private family. But today, we sense that the entire nation of Israel and the global community mourn this great loss. We share this pain, together.”

The family thanked the staff of Sheba Medical Center for its devoted care and sent a message to the other families sitting with loved ones in the Intensive Care Unit wishing for full recoveries.

Rafi Walden, Peres’ personal physician and his son-in-law, said Peres died with dignity and did not experience pain.

“We all believed that so much more still awaited him, and that Israel and the world would continue to benefit from his contributions,” Walden said. “His life ended abruptly, while he was still working on his great passion – strengthening the state and striving for peace. His legacy will remain with us all.”

Peres’ successor as president, Reuven Rivlin, issued a statement from Ukraine, where he attended ceremonies marking the anniversary of the Babi Yar massacre. Rivlin noted that he was located a short distance from the birthplace of Peres, who was born Szymon Perski and later immigrated to Israel.

“There is not a chapter in the history of the State of Israel in which Shimon did not write or play a part,” Rivlin said. “As one man he carried a whole nation on the wings of imagination, on the wings of vision. A man who was a symbol for the great spirit of this people. Shimon made us look far into the future, and we loved him. We loved him because he made us dare to imagine not what was once here, nor what is now, but what could be.”

Israeli schools dedicated the first hour of classes Wednesday morning to the memory of Peres by instruction of Education Minister Naftali Bennett.

“Shimon Peres was my education minister, and I will miss him very much. He didn’t watch history — he wrote it,” Bennett said in a statement. .

Jerusalem Mayor Nir Barkat called Peres “a true friend of Jerusalem,” and said he had “the honor of experiencing countless unique Jerusalem moments with President Peres.”

Knesset Speaker Yuli Edelstein said the Israeli parliament “bows its head and agonizes over the passing” of Peres, Israel’s ninth president and a former prime minister.

“The State of Israel bids farewell to the head of its family; a man who had seen everything, was involved in everything and shaped everything,” Edelstein said in a statement.

“He was among the giants of our national leadership over the past century; a man with much credit to his name, a shining example of a proud Zionist who aspired his entire life to act for the benefit of the country and its citizens.”

“My friend Shimon had a very rare human quality: He had the ability to change,” Oz said.

“When I met Peres in the early ’70s, he was in my eyes a banal hawk. Supporting settlers, a settler lover, a security man, the more land the better, the more power the better. He changed before my eyes … into an enthusiastic and stubborn believer in Israeli-Palestinian peace and Israeli-Arab peace.”

Tzipi Livni, a joint leader of the Zionist Union and a former foreign minister, wrote in The New York Times: “There are very few people in the world whose lives align so effortlessly with the birth and being of their homeland.”

Peres, she said, “left an indelible mark on Israel — fighting for its independence, its security, and then, for its peace. It is difficult to imagine Israel’s past without him; it will be even harder to imagine its future.”

Zionist Union leader Isaac Herzog called Peres “a teacher, a friend and a remarkable statesman who will be forever remembered as an icon of Israel’s history, and who’s legacy will continue to play a profound role in Israel’s future.”

Herzog said he has known Peres since he was a child, and was proud to have been able to serve him first as an assistant and later as an adviser.

“The State of Israel and the Jewish Diaspora were united in our love of this great leader, and we are united in pain at his passing,” he said.