A Jewish merman for all seasons 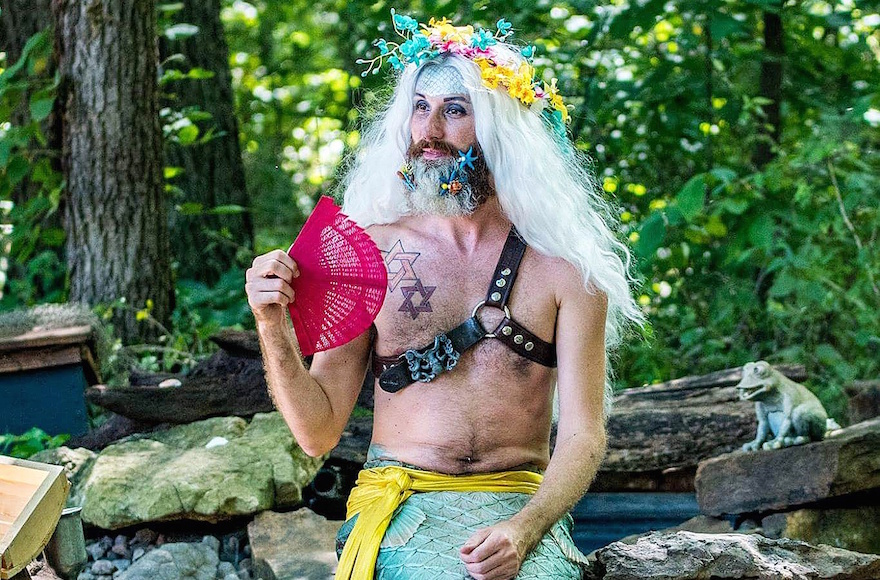 Tikva Naim Briggs, 34, is better known as Maksim Merman, the Yellowtailed SeaWitch. He is the world's only known professional Jewish merman. (Courtesy of Briggs)
Advertisement

BONNER SPRINGS, Kan. (JTA) – To find the world’s only known professional Jewish merman, you’ll need to look in the most unlikely of places. Here, more than a thousand miles from the nearest ocean — in one of the country’s most landlocked states, with one of the smallest Jewish populations — you’ll encounter Tikva Naim Briggs, who may be better known as Maksim Merman, the Yellowtailed SeaWitch.

Briggs, 34, relaxes on a shady rock on the fairgrounds of the Kansas City Renaissance Festival. Seashells cling to his silver-streaked beard. Satiny, silicone scales cover his lower body. And yes, those are Stars of David tattooed above his pectoral fins.

“I’ve always been fascinated with merfolk, but I had my mer-awakening in January of 2014 when I realized that it was more than a fascination,” said Briggs, who lives in Topeka, 50 miles to the west. “I thought, what a great way to be able to teach children and adults about marine life. And at the same time, you get to swim and have lots of fun.”

Besides the Renaissance Festival, which will keep him busy several days a week through late October, Briggs appears professionally at private parties and fundraisers. Between gigs, he’s never fully out of character. He posts constantly on Facebook and Twitter as Maksim Merman; he ends every email and text message (sent from his “shellphone”) with the same signoff: “Bubble kisses & Octopus hugs.”

And he never swims without his tail.

“I’m not particularly comfortable being under the water,” Briggs told JTA, admitting he didn’t learn to swim until the “ripe age” of 12. “Now that I’ve been swimming in a tail since 2015, it’s been easier. But get me out of the tail, and it feels like a fish out of water — literally!”

Briggs had long sensed he was destined to make waves.

“I would suppose it had really started from childhood watching ‘Splash’ and ‘The Little Mermaid,’” he said.

Once he realized that one could be a merman, Briggs said he saw it as a way to actualize his enchantment with all things aquatic and also “conquer some of my swimming fears.”

So he dove right in, using search engines and social media to find and befriend “mers” across the country. A year later he packed up the simple tail he had designed himself, using spandex and a diver’s monofin, and drove more than 1,100 miles to attend Merfest in Cary, North Carolina.

Briggs joined hundreds of merfolk around the pool at the Triangle Aquatic Center. He saw presentations by professional mer-models and met Robert Short, the visual-effects guru who designed Daryl Hannah’s mermaid costume and makeup in “Splash” (and who later won an Oscar for his work on “Beetlejuice”).

And he swam in his tail for the very first time.

“It was a very happy yet emotional statement because of the longing for acceptance,” Briggs said. “One does always long for a sense of community.”

In unveiling his mer-self, Briggs chose to go by Maksim — a Hebrew name sometimes translated as “enchanting,” with roots in the word for “magic”— to intertwine his mer and Jewish selves.

The multicolored Star of David tattoos, he said, are a tribute to his identity as a Jewish gay man, as well as a sign of mer-pride. (In addition to the three he has, Briggs is planning on two more tattoos, in blue and purple, to complete the Pride rainbow.) 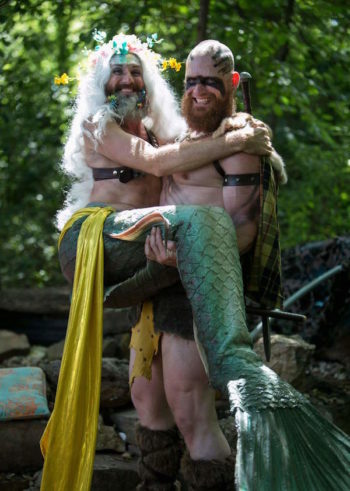 Tikva Naim Briggs and a “landsman” — a wrangler who helps him (and his tail) get around — at the Kansas City Renaissance Festival. (Courtesy of Briggs)

“I tie in my Jewish identity, my identity as a gay man, because, after all, this is me getting to play — but at the same time, it’s still very real,” he said.

Briggs was born in Indiana, but as a “Navy brat,” he spent time in Kentucky, Virginia, Oklahoma, Maine, Florida, Wisconsin and upstate New York before settling in Kansas at the age of 7.

He formally converted to Judaism eight years ago, though he said he has “always felt the way I do now about being Jewish since I was a wee child … that it just made sense, spiritually, and was meant to be.”

Briggs studied Hebrew so he could have his bar mitzvah, at 28, and regularly attends services at Temple Beth Sholom, a Reform synagogue in Topeka.

He credits Jewish tradition for his strong feelings about ocean conservation — it’s common for professional mers to champion a particular ecological cause. On social media, Briggs speaks  against beach pollution and shark finning, the practice of harvesting the dorsal fin and leaving the stricken shark to slowly drown.

“Being the religious merman that I am, I wouldn’t have a problem with it if they used the whole shark,” he said, “but they don’t.”

Merfolk — not to be confused with the Mer people, a Hindu community in the Saurashtra region of India — are a growing demographic in the world of cosplay (“costume play”), in which people adopt the personas of favorite science fiction and fantasy characters.

There is no way to get an exact tail count, but the online forum MerNetwork estimates the community numbers anywhere from the hundreds to thousands based on online activity and estimated sales volume of professional tailmakers. Among them are perhaps several dozen “professional mers” like Briggs, who model in their tails and role play at renaissance fairs and other events.

One thing is certain: It is a female-dominated realm. Of the 200 attendees at Merfest, Briggs was one of only six mermen (and perhaps a dozen or so pirates), and has been outspoken about the lack of visible male mer-models.

He is the only merman to appear at the Kansas City Renaissance Festival — yet in his second year, he is already “senior mer,” with a half-dozen mermaid mates, and the fair’s Mermaid Cove has been renamed Merfolk Cove, a promising nod to mer-equality. (A planned reboot of “Splash” starring Channing Tatum as the mer could do even more to help the cause.)

As a whole, Briggs’ “mersona” provides a modest supplement to his land-based career as a “hair artisan” at a Topeka salon. It’s tough, as being a merman also entails (ahem) some whale-sized expenses. He has launched a GoFundMe campaign to purchase his own professionally designed silicone tail from Florida-based MerNation Inc., which can cost as much as $7,000. (The silicone one he’s wearing for the Ren Fest, produced by Hawaii’s FinFolk Productions, is a loaner from a mermaid friend.)

It can be a lonely existence. Off the top of his head, Briggs said, he is not aware of any other merfolk, Jewish or otherwise, in Topeka, though he knows a mermaid in Wichita and two in Kansas City. Briggs is happily in a relationship, but alas, it’s a mixed union — his partner is a non-mer, though “he is very supportive of my work.” Briggs hopes to convince him to become a “landsman” — specifically, a wrangler who schleps him and his tail from place to place, since surrendering one’s legs to a silicone appendage, 70 pounds when wet, is more grueling than it might seem.

When this stint at the Ren Fest wraps up, “I’m hoping with the coin I make here, I can swim myself up to Greensboro, North Carolina, in January for Mermania,” he said of the next incarnation of Merfest.

Briggs also plans to renew his weekly swims at the aquatic center in Lawrence, a more liberal college town where no one cares that he’s the only one in a tail. (He avoids the local pool in more conservative Topeka.)