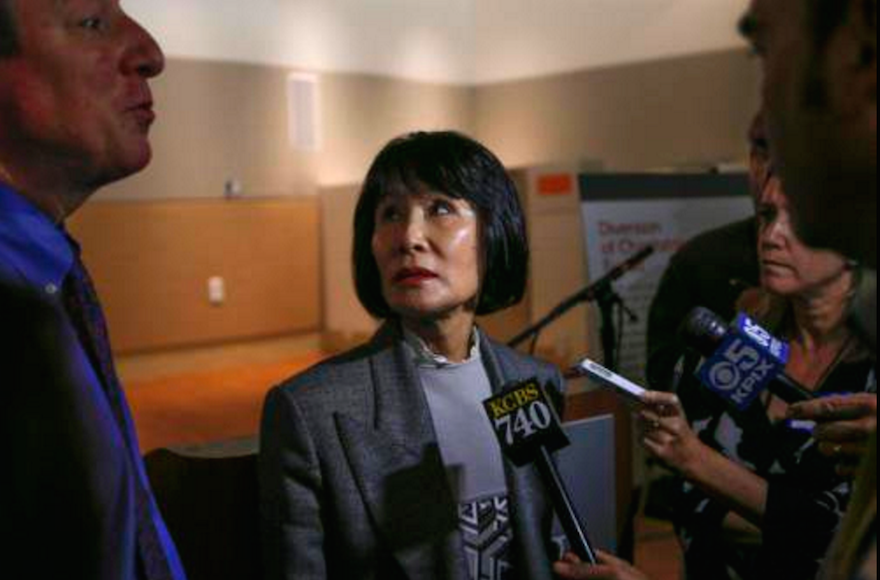 Susan Koret taking questions concerning the trial on control of the foundation founded by her husband, April 2016. (Screenshot from YouTube)

(JTA) — The settlement of a lawsuit focused on control of the San Francisco-area’s $600 million Koret Foundation will result in the founder’s widow and its longtime president leaving the foundation’s board.

Under the settlement, Susan Koret, widow of founder Joseph Koret, is retiring from the board immediately. Tad Taube, a foundation trustee for the past 37 years, will retire on April 1, according to a news release issued Thursday by Susan Koret and the foundation and reported by J., the Jewish news weekly of Northern California.

Susan Koret’s lawsuit accused Taube of granting millions of dollars to projects that she claims were outside the scope of the foundation’s original mission of helping the poor and aiding Jewish communities in Northern California’s Bay Area and Israel.

The news release did not say whether there were any monetary damages awarded as part of the settlement.

Susan Koret has been the foundation’s board chair, a position she was granted for life by her late husband. Taube also chairs his own charitable organization, Taube Philanthropies, based in Belmont, California.

“The Koret Foundation will continue its programs in furtherance of charitable, educational, religious, scientific and literary purposes, including charitable giving to the Jewish community,” the release said.

“The proposals are exactly right, the settlement is reasonable, it places the interests of the foundation above the individuals,” Karnow said from the bench, ending a case that evolved from a feud between Koret and Taube, who lead two of the Bay Area’s largest philanthropies centered on issues involving Judaism and Israel.

Susan Koret filed suit in 2014 seeking to have Taube and former Koret general counsel Richard Greene removed from the board of the $600 million foundation, according to J.

The lawsuit further demanded recovery of millions of dollars that Susan Koret claimed were granted to projects outside the scope of her husband’s original mission of helping the poor and aiding Jewish communities in the Bay Area and Israel.

The suit accused Taube of diverting Koret Foundation funds to Jewish projects in his native Poland — including the Polin Museum of the History of Polish Jews in Warsaw, which opened in 2014 — as well as to conservative U.S. groups such as Stanford University’s Hoover Institution.

Susan Koret also contended the foundation had losses of about $34 million because of actions taken by Taube and other board members, including the untimely sale of Bay Area real estate and expenses related to the Hoover Institution and other causes.