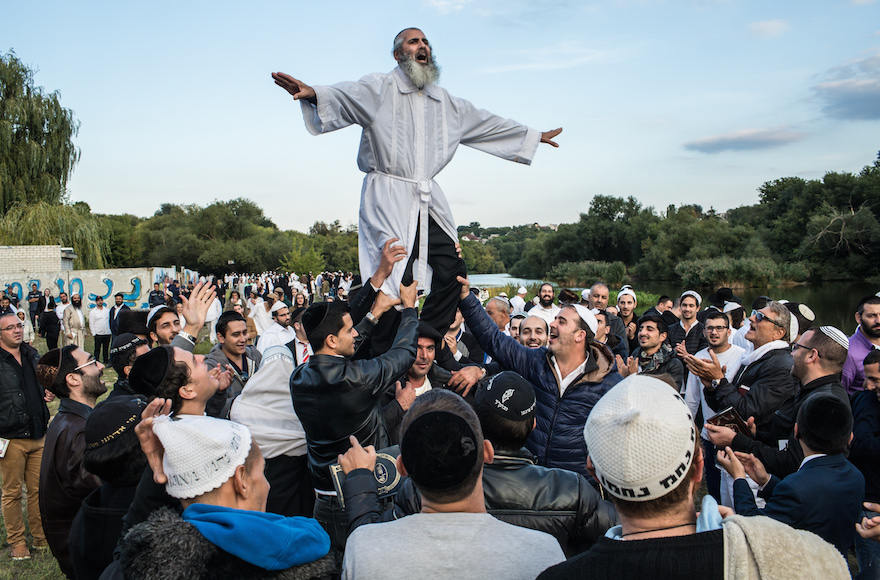 (JTA) — Jewish pilgrims in the central Ukrainian city of Uman lit fires in at least five apartments in a string of incidents involving rowdiness during Rosh Hashanah.

In one incident, firefighters rushed to a residential apartment rented by pilgrims who started a fire in the balcony to fry kosher meats they had brought with them, the news site Korrespondent reported Monday. The balcony sustained damage before the firefighters extinguished the flames, the report said.

Some 30,000 Jews, mostly from Israel, gathered in Uman ahead of the Jewish New Year as part of of an annual pilgrimage to the grave of Rabbi Nachman of Breslov, an 18th-century luminary buried in Uman. Rabbi Nachman when he was alive called on his followers to be with him on Rosh Hashanah.

In another incident, pilgrims are believed to have illegally taken over the announcement system at Boryspil International Airport in Kiev, playing Hasidic music over the airport’s speakers and preventing operators from providing passengers with flight and security information. Earlier this year, a hotel in Uman was criticized for refusing to rent rooms to Jews on Rosh Hashanah.

In recent days, Ynet published two videos showing violent and rowdy behavior aboard two flights from Israel to Kiev — IsrAir and El Al — ahead of Rosh Hashanah. Channel 2 reported that flight attendants are scared to work aboard pilgrim flights for fear of violence and intimidation by passengers.

Uman only has the capacity to absorb 5,000 visitors at once, and overpopulation creates bitterness and friction, according to the municipality. Violence between Hasidim and locals is common in Uman, as is drug use among the pilgrims. In addition, their arrival in Uman attracts prostitutes from across Ukraine.

The Breslover Hasidic sect, whose followers constitute much of the pilgrimage, has a strong presence in Israel’s prisons, where it does outreach work aimed at getting inmates to become more religiously observant. Breslovers also work with poor Israelis.

Most Jews who visit Uman stay in the Pushkina area, where Ukrainian police, along with Israeli officers who are sent especially for the holiday, restrict non-Jews, including locals, from entering during the holiday to prevent violence.

This Rosh Hashanah, at least one pilgrim was robbed in Uman. The attackers made off with his wallet and cellular phone, Jewish.ru reported.

In Uman, many locals resent the Jewish pilgrimage because they say it invites criminality and does not contribute to the local economy, as most pilgrims pay other Jews for various services, including housing in apartments in Pushkina and kosher food.

However, this year’s pilgrimage added a total of $260,000 to the municipal budget of Uman, according to Jewish.ru.