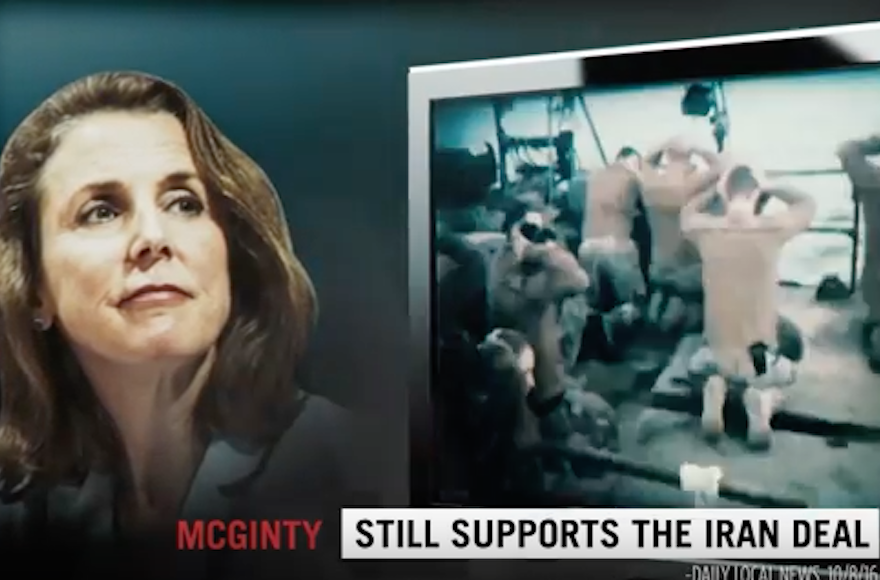 The Republican Jewish Coalition announced a campaign attacking Katie McGinty, a Pennsylvania Democrat running for Senate, over her support of the Iran nuclear deal. (Screenshot from YouTube)
Advertisement

(JTA) — The Republican Jewish Coalition has launched a campaign attacking a Pennsylvania Democratic candidate in a tight Senate race for her “dangerously naive” support of the Iran nuclear deal.

In addition to slamming Katie McGinty, the Republican group’s drive will highlight Republican incumbent Sen. Pat Toomey’s opposition to last year’s Iran deal in which six countries, led by the United States, reached an agreement with Iran to limit its nuclear program in exchange for the lifting of sanctions on the country.

Polls show a close race between the two candidates.

The Republican Jewish Coalition announced Wednesday that it was launching the campaign, which will run through Election Day on Nov. 8 and  include TV and digital ads, direct mail and voter contacts.

One advertisement in the campaign costs $500,000, according to NBC.

“By supporting this dangerous deal with Iran, Katie McGinty is placing partisan interests ahead of the security of Pennsylvanians, our country, and our allies around the world,” Republican Jewish Coalition Executive Director Matt Brooks said in a statement.

Meanwhile, J Street announced last week that it was expanding its existing campaigns in Pennsylvania and Wisconsin against Senate candidates opposing the Iran deal to Illinois and New Hampshire.