In NJ, a Trump-Clinton surrogates’ debate gets almost as nasty as the real thing 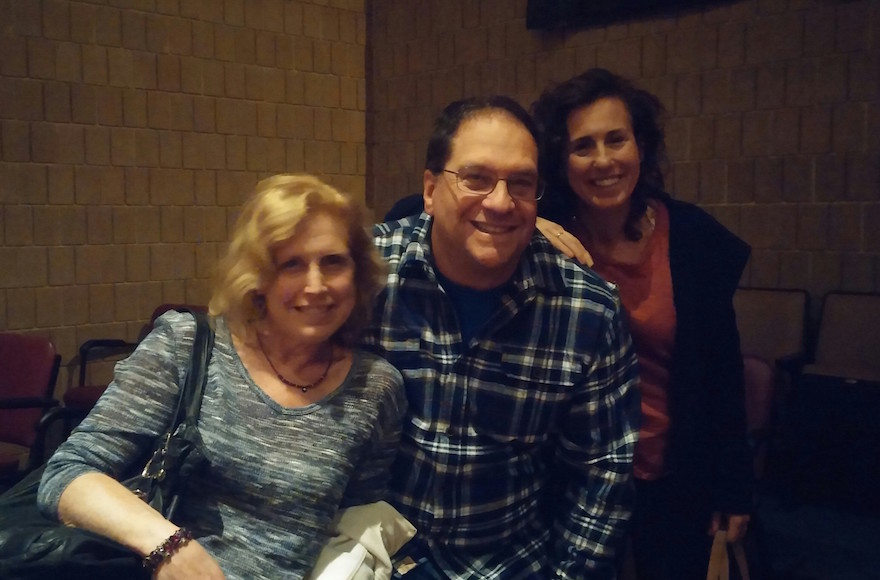 Tammy Resnikoff, right, came to the debate at the West Orange JCC with her friends Lisa and David Segelman, all of them hoping to learn more and still some of their anxiety about the divisiveness of the elections. (Elaine Durbach)
Advertisement

WEST ORANGE, N.J. (JTA) — In a normal election year, a candidates’ surrogates forum that devolved into shouts of “Stop lying!” and lusty booing might have been seen as a worrying breach of propriety.

But in the closing days of an uncommonly vicious campaign, Tuesday’s testy presidential forum at the Jewish community center in this New Jersey suburb came out sounding downright civil by comparison.

About 100 people attended the forum, which was hosted by the Community Relations Committee of the Jewish Federation of Greater MetroWest NJ and featured presentations by two Washington PR strategists — one backing Donald Trump, the other Hillary Clinton.

The tone of the evening — titled “Which candidate is better for the American and the global Jewish community?” — was generally more cordial than anything on the airwaves, but it wasn’t enough to keep the peace.

“Stop lying!” an audience member yelled as the Trump surrogate, Jeff Berkowitz, tried to explain why the Republican presidential candidate has not released his tax returns and why his 104-page financial disclosure form should be enough to satisfy voter concerns.

“You might not like it, but those are the facts,” Berkowitz, a former research director at the Republican National Committee who heads the public affairs firm Delve, shouted back.

Another audience member was nearly drowned out by audience boos when he asked how Clinton supporter Aaron Keyak felt about the “close family ties” between Clinton aide Huma Abedin and “radical Islamists.” (Conspiracy theories about Abedin, whose parents are Muslim immigrants from South Asia and who herself spent much of her childhood in Saudi Arabia, are a staple of the anti-Clinton far right.)

“It doesn’t help our community when you make wild statements about people,” he said. “People used to do that to our community to stop us having our say, pushing things that weren’t true.”

Berkowitz lost favor with the audience, however, when he went on to describe both candidates as “horrible, horrible,” and said of Clinton, “How can we elect someone who should be in jail?”

“Not true!” another audience member shouted.

“He’s a con man,” the heckler responded, referring to Trump.

Keyak, meanwhile, was asked whether he would prefer to have a different candidate than Clinton.

“I voted for her in the 2007 primary,” said Keyak, the co-founder and managing director of Bluelight Strategies, which works with a number of progressive, Jewish and Democratic clients. He went on to list what qualifies Clinton to represent “the strongest country on earth.”

Keyak declared that the “historic moment of … finally having a woman president is being lost in all the partisanship and controversy.”

Like Berkowitz, Keyak expressed concern about the anti-Israel Boycott, Divestment and Sanctions movement, and warned that whoever wins the White House will face hardening attitudes in that regard. Both stressed the pro-Israel positions of their party’s candidate, with some skepticism from the otherwise pro-Democratic crowd about Clinton’s.

Perhaps the loudest applause came when an audience member contradicted Berkowitz’s contention, and that of other attendees, that the Obama administration has been a poor friend to Israel — a position they said Clinton would continue. The audience member described his recent first trip to Israel, saying, “I got a very different response than I expected. They said they were quite happy with Obama. I thought they must be left-leaning, but they said no.”

Keyak, unsurprisingly, concurred, saying leading Israeli figures have described Obama’s support for Israel as being “as strong as any president in terms of foreign aid, joint military exercises, votes in the United Nations and aid packages.”

The Clinton surrogate acknowledged Jewish communal criticism of the Iran nuclear deal and the administration’s criticism of Israel’s settlement policies.

“It’s very popular with some elements of the Jewish community to say [support] is never enough. That’s good,” Keyak said. “We should always try for more.” 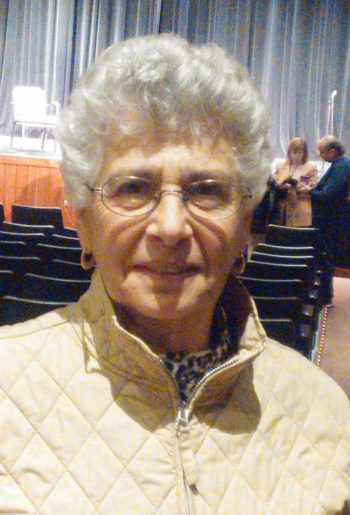 Audience members were taken aback by the animosity on display.

“I was impressed by the spokespeople, but I was distressed by the lack of self-control from the audience,” said Michelle Bobrow of nearby Maplewood, a longtime activist with the League of Women Voters. “That’s not us. You can see that people are very nervous, that they feel threatened.”

While most in the audience were clearly Democrats or at least pro-Clinton, some made their distaste for her very clear. One woman, whose companion persuaded her not to give her name, said, “We have to have change. I immigrated here from Germany in 1963 because this was a wonderful, inspiring country. Now everything has been ruined. It is no longer respected in the world. There are so many regulations, people who want to start small businesses can’t do anything. It’s terrible.”

Her friend, an Israeli who has lived in the United States for decades, cited the Iran deal as proof of the current administration’s betrayal of Israel.

“And if you have any doubt about what Hillary is like, you should read what Ambassador Dennis Ross has said about her,” she said.

(Ross, the veteran Middle East negotiator, in fact has disagreed with Obama administration polices in the region but has written that he usually had the backing of Clinton, then the secretary of state.)

However, neither of them likes Trump. They declined to say for whom they will vote.

“Both of them are terrible,” the first woman said.

Lisa Zaslow Segelman, of Randolph, had come to the event with her husband, David, and her friend Tammy Resnikoff. None of the three wanted to say which candidate they are supporting, but they were clear about the current political climate.

“We’re facing a potential national emergency – I mean, like having to lay in food supplies,” Segelman said.

Resnikoff added: “It’s like only the loudest pit bull gets heard. If you’re a shy, timid person, you don’t get to say your piece.”

Segelman said she was 11 when Nixon was elected, “and I remember being scared then.”

“I haven’t been afraid again – till now,” she said.