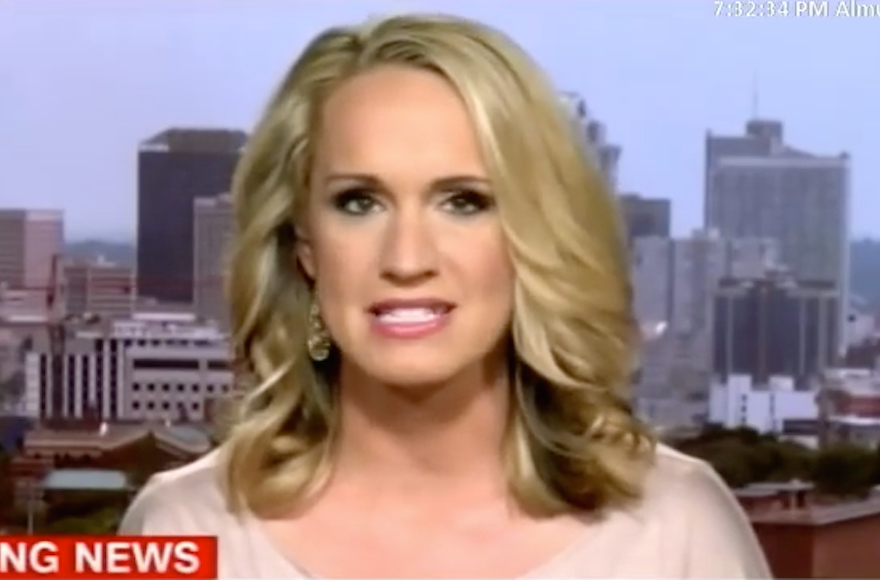 A Donald Trump surrogate slammed Hillary Clinton for allowing Jay Z to perform at a rally, but she got one detail wrong, when she said the rapper had featured “mazel tov cocktails” in one of his music videos.

In a Sunday night appearance on CNN, Scottie Nell Hughes apparently confused the Hebrew expression for “congratulations!” with a Molotov cocktail, or handmade bomb. Such weapons appeared in Jay Z’s “No Church in the Wild” video.

“One of his main videos starts off with a crowd throwing mazel tov cocktails at the police. And that’s very much an anti-police message,” Hughes said, Deadspin reported.

What is a "mazel tov cocktail" pic.twitter.com/xmTiBnoaia

“[T]rust me.. I realized at that moment, I should have taken a nap at some point the last 24hrs,” she wrote to Sekoff.

trust me.. I realized at that moment, I should have taken a nap at some point the last 24hrs.

Sekoff couldn’t resist the opportunity to tease Hughes a bit further. “As long as when the race is called Tuesday night you don’t stomp on a glass and call out ‘L’chaim!!'” he tweeted.

As long as when the race is called Tuesday night you don't stomp on a glass and call out "L'chaim!!"

The bizarre exchange went on, with Sekoff seemingly taking a stab at Trump’s policies.

When Hughes used (and misspelled) the expression “Oye vey” in  a subsequent tweet, Sekoff pounced.”Is that what Latino Jews say when they look at the R line on the ballot?”

Monday morning she once again brought up Jay Z’s video on Twitter, but this time she used the proper name for the improvised bombs.

Here is Hillary's friend Jay-Z's video throwing Molotov cocktails at police we were discussing last night at 12am https://t.co/sJjOreiHEv

18 parts Manischewitz/1 part seltzer, serve in lucite cup engraved w the drinker's initials. "This tastes awful. That's all they give you?" https://t.co/zZfcFhqJRJ

Author and comedian Jensen Karp joked that the drink had gotten the party started at his bar mitzvah.

had those at my Bar Mitzvah. Got people dancing

Adam Serwer, senior editor at The Atlantic, was so excited by the gaffe that he made it his new Twitter display name.

Incidentally, “Mazel-Tov Cocktail” was the name of ‘zine celebrating Jewish punk culture published in the early 1990s by Jennifer Bleyer, who went on to become the founding editor and publisher of Heeb Magazine.