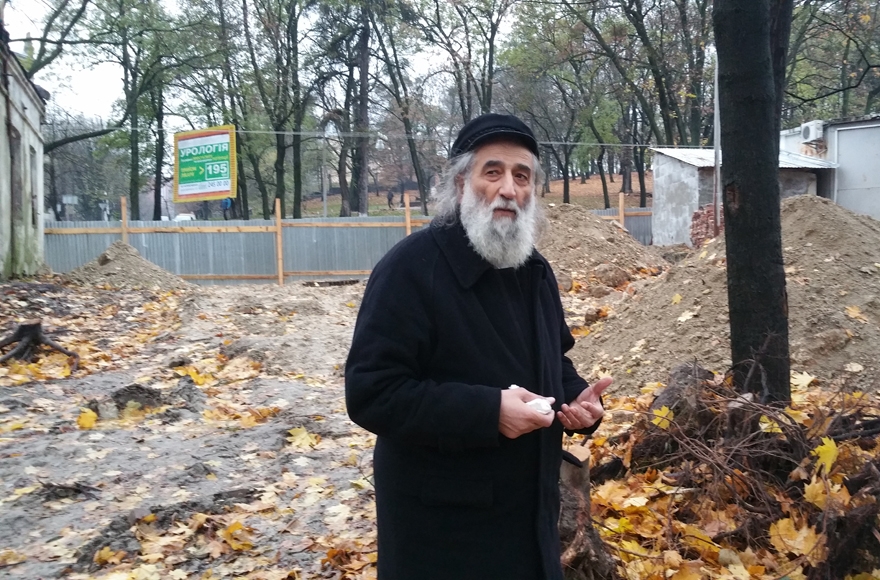 LVIV, Ukraine (JTA) — City workers in a Ukraine city suspended their digging at a former Jewish cemetery amid controversy over the unearthing of human remains at the site.

Pieces of skull and limbs were among the bones discovered last week at the Old Jewish Cemetery of Lviv, in western Ukraine, where diggers with heavy machinery excavated a 40-foot trench despite previous objections to the work by some local Jews.

Officials said the dig, which went through without permission from local rabbinical authorities, was necessary to reinforce a damaged exterior wall. But Meylakh Sheykhet, Ukraine’s director of the Union of Councils for Jews in the Former Soviet Union, disputed the claim.

Sheykhet, who complained to police about the dig, said he believed the work was part of a multi-phase commemoration project that he has fought in court, saying it would damage heritage sites and desecrate burial places needlessly in violation of the principles of halachah, Jewish Orthodox religious law.

“This dig is as illegal as it is cynical; the city is desecrating Jewish graves it says it wants to commemorate,” said Sheykhet, who has collected pieces of bone throughout this week from the heaps of cemetery earth left exposed by the diggers at the site, which is adjacent to what used to be the Jewish hospital in Lviv.

The city, along with the Center for Urban History of East Central Europe there, has announced plans to build a memorial park near the area where the work was taking place. The area is part of a larger Jewish burial place that today mostly lies under a main marketplace built during communist times.

However, the center’s director, Sofia Dyak, told JTA on Thursday that the dig was not part of any commemorative project but rather an effort to repair a wall she said was “collapsing.” She added the work is legal.

“Before the work started, consultations had to be made” with Lviv Rabbi Mordechai Shlomo Bald, Dyak said. “It was done later, unfortunately.”

She said a vice mayor of Lviv was now in contact with Bald.

“On Sunday, Rabbi Bald reburied bones that were found,” Dyak wrote in an email. “There are some new remains, and they will be reburied as well. Works proceed in communication with the chief rabbi of Lviv and in consultancy with visiting rabbis.”

The plan to build a park near the cemetery is part of a larger commemorative project whose initial phase was unveiled in September with the inauguration of a memorial monument on a part of the former Golden Rose Synagogue complex.

Sheykhet opposed that plan as well and fought it in court, but it proceeded with the support of some Jews in Lviv, including the Chesed-Arieh association.