Jewish Federations on Bannon: ‘Trump needs to be given an opportunity to lead’ 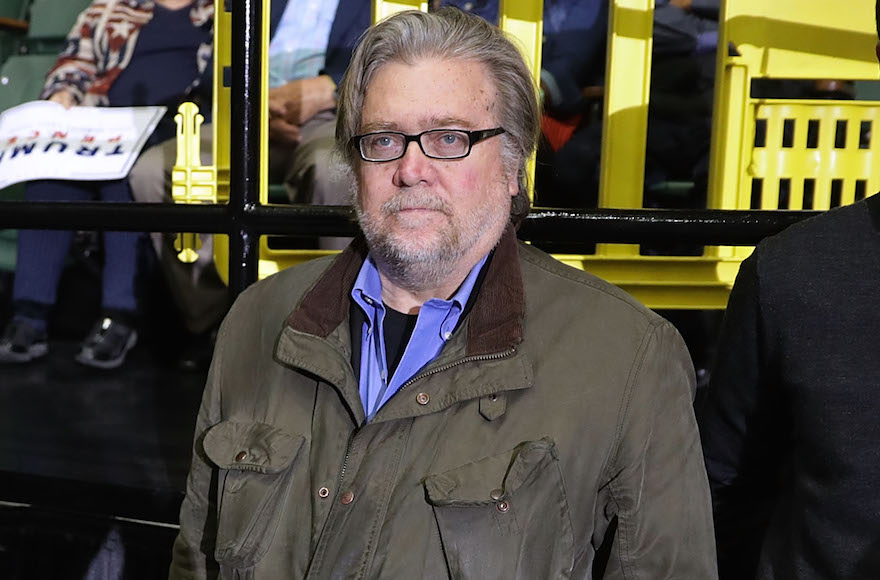 (JTA) — Responding to a petition calling on it to denounce Stephen Bannon, the Jewish Federations of North America told JTA “Trump needs to be given an opportunity to lead.”

JFNA’s statement Thursday morning did not mention Bannon by name. But it was sent to JTA in response to a petition urging the umbrella body encompassing 151 local Jewish federations to condemn the appointment of Bannon, whom President-elect Donald Trump picked as his chief strategist on Sunday.

Bannon is the former chairman of Breitbart News, a website that Bannon himself called “the platform for the alt-right,” a loose movement of the far right whose followers traffic variously in white nationalism, anti-immigration sentiment, anti-Semitism and a disdain for “political correctness.”

“As with every democratically elected official in America, we believe that President-elect Trump needs to be given an opportunity to lead,” the statement read. “We are hopeful that his actions align closely with the American values that we hold dear.”

The petition, started Tuesday by a new group named Jewish Community of Action Against Hate, has garnered nearly 2,000 signatures as of Thursday afternoon. The new group was launched by seven people from suburban Seattle, Washington, and calls itself a “Jewish grassroots community.”

“Having Stephen Bannon as a key strategist in the White House sends a clear message to hate groups that their belief system is no longer fringe, but now accepted,” the petition reads. “As an organization that is dedicated to securing the Jewish future by empowering community members to take charge of their Jewish lives and provide leadership to their community, we take you at your word and assume that you will keep your pledge to empower and listen to those of us that speak up.”

One day after the Nov. 8 election, JFNA sent a letter to Trump saying “We very much look forward to working closely with you and your administration on uniting our country and on the important challenges ahead of us all.”

The petition comes on the heels of a letter circulated by Rep. David Cicilline, D-R.I., calling on Trump to rescind Bannon’s appointment. As of Wednesday, 169 House of Representatives lawmakers, all Democrats, have signed on, including all but two of the 19 Jewish representatives.

Also on Thursday, American Jewish Committee CEO David Harris alluded to Bannon in a statement, saying, “nominations and appointments send signals, all the more so when there is still considerable uncertainty, because of no prior governing experience in the case of President-elect Trump, about our country’s course following the inauguration on January 20th.” Harris said AJC “respectfully urge[s] him to find early opportunities, both in words and deeds, to stress his commitment to the well-being and protection of all our nation’s citizens.”

Two conservative groups, the Republican Jewish Coalition and the Zionist Organization of America, have defended Bannon as a supporter of Israel. An RJC board member called the condemnations of Bannon a “shonda,” Yiddish for shame.