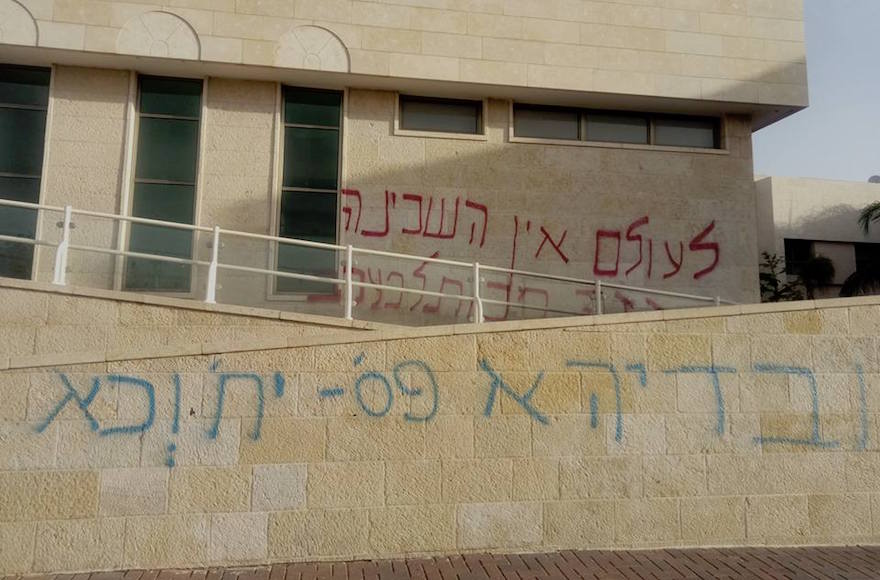 JERUSALEM (JTA) — Hate graffiti was painted on the walls of a Reform synagogue in Raanana and death threats left in envelopes held down by a knife addressed to prominent Reform leaders were left at its doorstep.

The graffiti was discovered Thursday morning at Kehilat Ra’anan in the central Israel city. A similar attack occurred in January, though did not include death threats.

The phrase “The divine presence will never leave the Western Wall,” was spray painted on the building as well biblical references  “Ovadia 18 and 21,” and ” Psalms 139:21-22.” The Ovadia citation deals with the destruction of Israel’s enemies at the hand of a vengeful God. The Psalms citation states of enemies of God: states: “I hate them with utmost hatred; they have become my enemies.”

The letters were addressed to Rabbi Rick Jacobs, president of the Union for Reform Judaism; Rabbi Gilad Kariv, executive director of the Israel Movement for Reform and Progressive Judaism and Anat Hoffman, chair of Women of the Wall and the head of the Israel Religious Action Center, the advocacy arm of the Reform movement in Israel.

The three participated earlier this month in a protest for egalitarian worship at the Western Wall, which concluded with bringing about a dozen Torah scrolls to the women’s section for a Rosh Chodesh service.

The synagogue of 80 families has been in Raanana for 18 years. Three pre-schools reportedly operate out of the building.

Israel’s Prime Minister Benjamin Netanyahu condemned the graffiti, saying in a statement issued by his office that: “Such acts have no place in our free society.”

“These threats will not deter us from continuing to promote our values at the Western Wall, in Raanana and everywhere else across the country,” Kariv said in a Facebook post. “But we also are not ready to close your eyes to it. In the last year there has been in Israel unprecedented campaign of incitement against Reform Judaism led by political and rabbinic leadership. It is time to stop the wave.”

Education and Diaspora Affairs Minister Naftali Bennett, the head of the Jewish Home party and a resident of Raanana, called for such incidents to stop.

“Around the world, and in Israel, live Jews with different world views. There are differences of opinion over substantial issues – including Jewish life. At times there is a chasm between one’s opinion and the other. But we cannot allow disputes deteriorate to abusive discourse and incitement, which could lead to the physical harming of a person because of his opinions and beliefs,” Bennett said in a statement.

The Tzohar Rabbinical Organization highlighted the seriousness of the incident.

“Even while there are clear differences between how we and the Reform movement approach issues of Jewish identity and the Jewish nature of the State, it should be completely clear that those differences of opinion must never lead to any hint of violence- neither verbal nor physical,” the group said in a statement. “We wholly condemn what was done to the Reform center in Raanana and join in the call for the authorities to act to stem any further tide of violence and not diminish the seriousness of these incidents. ”

Jacobs, in a statement released later on Thursday called the threats “deplorable,” adding: “But, alas, they are far from surprising.”

“For months, we have heard the steady drumbeat of incitement against our Movement and our leaders.   While we welcome Prime Minister Netanyahu’s statement against these specific attacks and those of other Israeli leaders, there must be more.   There must be a recognition that today’s deplorable acts are the all too predictable consequence of efforts to delegitimize Reform Judaism in Israel,” he said.