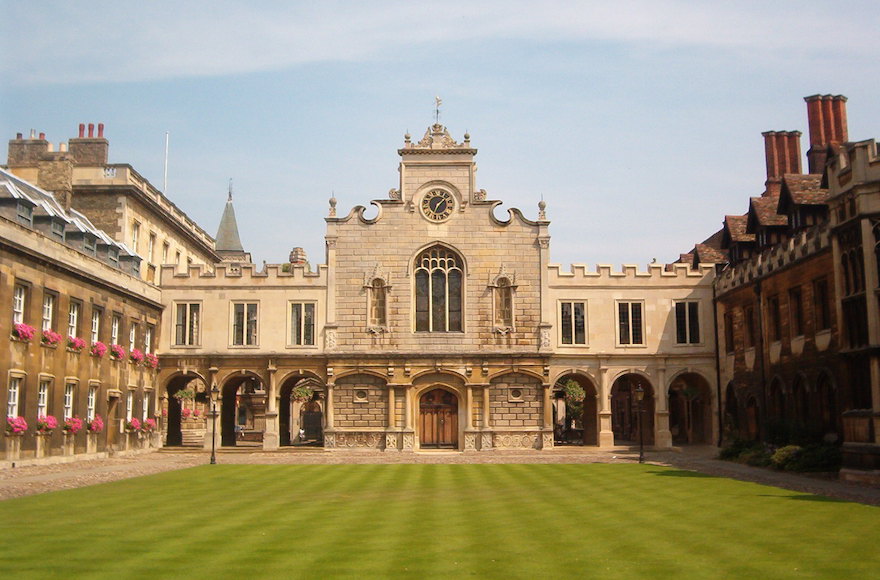 A view of a chapel at the University of Cambridge. (Wikimedia Commons)
Advertisement

(JTA) — Three Jewish students at Cambridge University in Britain say they were violently attacked by members of a university drinking club and that the university covered up the results of an investigation into the incident.

The incident that occurred late last month was first reported Saturday by the British daily newspaper The Telegraph.

The students said they walked into a graduate student union bar but discovered that it had been rented out by the sporting societies of Christ’s College.

One of the students, identified as Shlomo Roiter-Jesner, 25, said that when the students at the bar noticed their kippot, they became “more physical and more vocal.”

“All of a sudden they were shouting: ‘Jew, get f****** out of here.’ We tried to leave but they were yelling at us,” Roiter-Jesner told the Telegraph.

A second unnamed student told the newspaper that the “vicious anti-Semitic slurs” included  “‘f****** Jew, you don’t belong here’, ‘dirty Jew,’ ‘f*** off, darkie.'” He added that they then tried to choke one of his friends with his own scarf and threatened physical harm to all three of them.

There were witnesses to the incident and a closed circuit security video of the incident, which did not include a sound recording, according to the Telegraph.

“The internal disciplinary process of the tutors is now concluded and two students have been disciplined,” the response said. “Thank you for bringing this matter to my attention.”

The students were not found to have acted out of anti-Semitism.

Stapleton said in a statement to the Telegraph: “The internal investigation did succeed in identifying two Christ’s students who admitted using foul language and participating in a scuffle, but they denied initiating the physical hostility and denied using any anti-Semitic or racist language. In relation to the former they were disciplined.”

She added: “I reject categorically that Christ’s has engaged in a cover-up on this matter.”

In a statement to the Jewish Chronicle, the Union of Jewish Students said: “No Jewish student should have to experience what these students have described, and the fact that this disgraceful incident happened at the University of Cambridge only proves that anti-Semitism can rear its ugly head on any campus.

“There should be zero tolerance towards the vile abuse that these three Jewish students received, but once again this is another example of anti-Semitism not being taken as seriously as it should be.

“Although we welcome Christ College’s decision to discipline two of the perpetrators, it is vital that the college is transparent in its processes.”