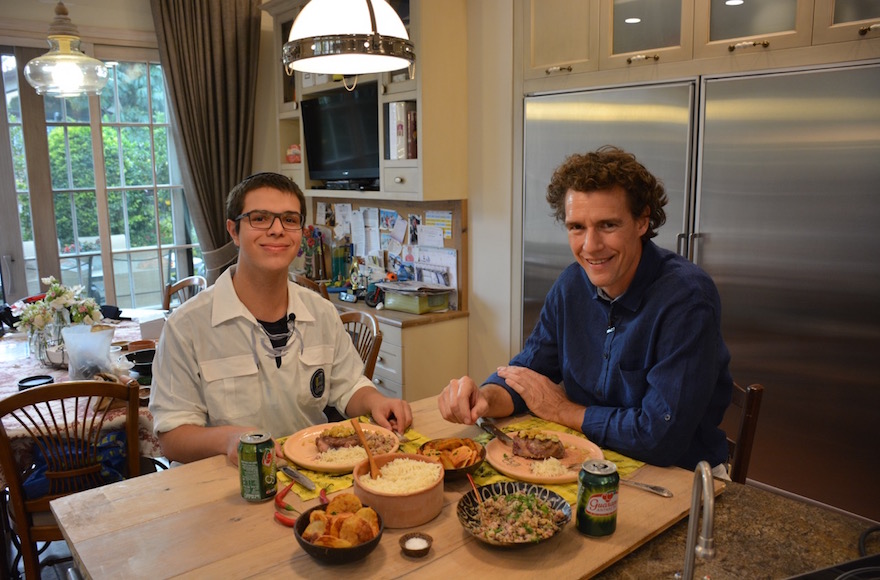 (JTA) — Brazilian Jews rarely require excuses for combining their love for a good party with their other great passion: red meat.

Weddings, bar mitzvahs, britot — even funerals — all serve as perfectly legitimate pretexts for throwing churrascos, the Portuguese-language word for barbecues featuring morsels served rodizio-style: Meat that is sliced for each diner specially off an expertly grilled slab of prime beef.

But there’s more than just carnivorous proclivity behind the unusual decision by the Brazilian branch of the Bnei Akiva youth movement to celebrate a steak recipe named in honor of the late Brazilian diplomat Osvaldo Aranha.

The YouTube cooking video that World Bnei Akiva prepared for Nov. 29 marks the 69th anniversary of the vote at the United Nations in 1947 that partitioned the British Mandate of Palestine into two states, Jewish and Arab. A former president of the U.N. General Assembly, Aranha played a crucial role in ensuring a majority in favor of that resolution.

Filet Osvaldo Aranha is a well-known meat dish in Rio de Janeiro, where the diplomat would order it every day at his favorite restaurant. Aranha is also the dish’s inventor (to this day, many gourmet restaurants in Rio will prepare whatever off-menu dishes patrons ask for, as long as they have the necessary ingredients). 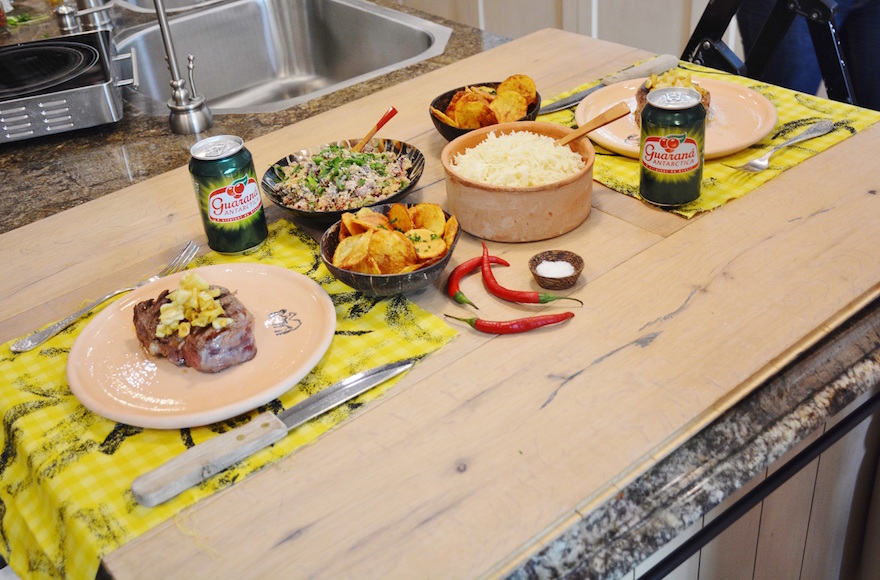 The Bnei Akiva recipe replaces the non-kosher ingredients of butter and bacon with margarine and smoked goose, but keeps the signature element of the dish: a whole head of garlic chopped into fine slices and fried in olive oil which are then slathered on top of the steak, essentially covering it completely. It also features a side of farofa — Brazilian toasted flour mixture – with plenty of onion, parsley and goose breast.

In the Bnei Akiva video, Tom Franz, the German-born winner of the 2013 season of Israel’s cooking reality show MasterChef, offers viewers precise instructions on how to make the dish but no advice on how to deal with its dramatic effects on breath and body odor. Instead, he urges viewers to celebrate Aranha’s legacy by making the dish, because “cooking and eating is a glue that keeps up together.”

Leaving Franz to handle the garlic, Brazilian Bnei Akiva graduate Danny Ashkenazi explains in the video why so many members of his community regard Aranha, a Roman Catholic who died in 1960, as a hero.

“Today, 69 years ago, the United Nations held a vote about the Jewish people’s right to have their own independent state, alongside an Arab one, in the British Mandate for Palestine,” he said. Aranha was “undoubtedly instrumental in securing” the vote, which was supported by two thirds of the U.N. General Assembly, he continued.

The vote was originally scheduled to fall on America’s Thanksgiving Day of that year. Aranha, who favored the establishment of a Jewish state, used this fact to postpone the vote at a time when the representatives of prestate Israel had not yet consolidated a majority.

“Osvaldo granted two days to the Israeli cause — two valuable days during which the Jewish Agency managed to secure more votes, all the while Osvaldo himself lobbied heavily for the cause he represented,” said Ashkenazi.

Aranha’s role in Israel’s founding was recognized also in the country he helped establish. He has a square named after him on Agron Street in Jerusalem, a stone’s throw away from the city’s Great Synagogue.

Still, Aranha’s historical role “has been slightly forgotten” outside Brazil, said Roi Abekasis, the secretary of World Bnei Akiva. “So we decided to raise awareness to his actions” by producing the video. The movement’s Brazilian Branch, he added, will hold activities themed around Aranha’s actions this week.

But Leo Rabinovitz, 20, a leader of Brazil’s Bnei Akiva movement who is responsible for the production of the Nov. 29 video, says he needs no special activities to realize the contribution of Aranha. The diplomat was a personal acquaintance of Rabinovitz’s father and used to have warm contacts with Brazil’s Jewish community until his death. Recalling a recent visit to Aranha Square in Jerusalem, Rabinovitz said: “Being there makes me proud to be Brazilian.”