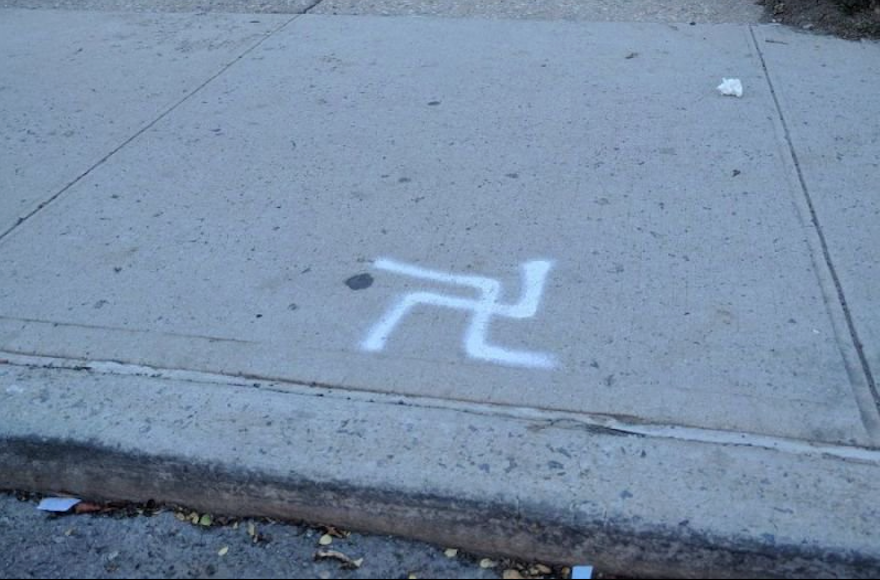 A swastika was discovered in Crown Heights, Brooklyn, Nov. 13, 2016. (Screenshot from Twitter)
Advertisement

(JTA) — Police on Long Island are investigating several acts of vandalism, including the scrawling of swastikas, at a community college in the New York suburb.

The latest incident at Nassau County Community College in Garden City occurred Friday evening, when the words “Germany” and “Heil Hitler” were drawn with a black marker inside a men’s restroom. Campus security had found three large swastikas drawn on a campus building two days earlier.

In October, swastikas and anti-Semitic statements were found in men’s bathrooms on the campus on three separate occasions, according to reports.

“We are concerned to see hateful graffiti continue to surface at Nassau Community College,” Evan Bernstein, New York Regional director of the Anti-Defamation League, said in a statement. “Institutions of learning must be a safe space for all students. No one should ever be subjected to such hateful anti-Semitic imagery or be made to feel vulnerable on campus. We hope Nassau Community College leadership will do all it can to discourage such acts of hate and encourage respect among its student body.”