What Rex Tillerson, Trump’s pick as secretary of state, could mean for the Jewish agenda 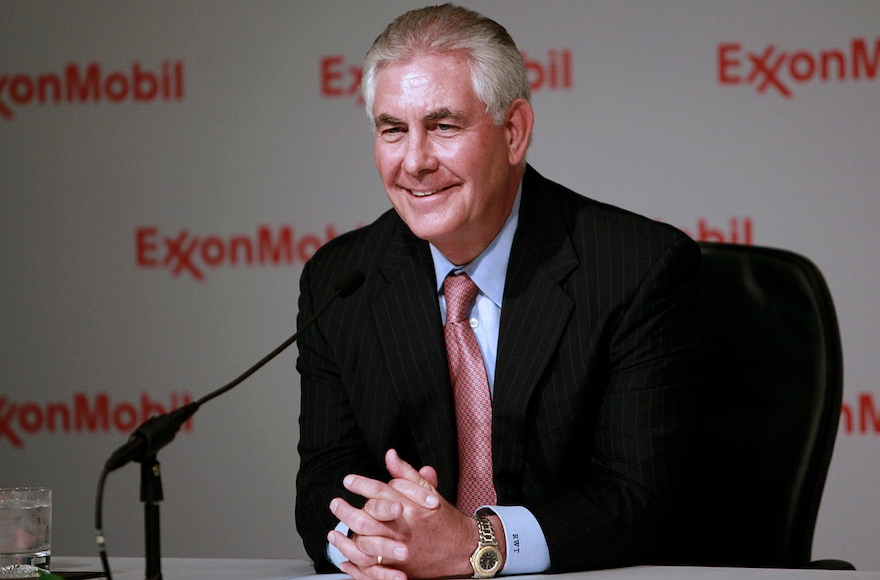 Rex Tillerson speaking to the media after the Exxon annual shareholder's meeting at the Morton H. Meyerson Symphony Center in Dallas, May 25, 2011. (Jason Janik/Bloomberg News via Getty Images)
Advertisement

WASHINGTON (JTA) — President-elect Donald Trump’s pick for secretary of state, Rex Tillerson, is the chairman and CEO of Exxon Mobil, an energy company large enough to have its own foreign policy.

It is a policy, however, that doesn’t always align with the priorities of Jewish and pro-Israel groups. Oil companies have clashed in the past with the pro-Israel lobby.

“Exxon Mobil has not been a friend to Israel through the years,” said Abraham Foxman, the national director emeritus of the Anti-Defamation League, referring to clashes in the 1970s over the Arab boycott of Israel and in the 1990s over the imposition of sanctions on Iran.

Others suggest, however, that fears that Big Oil will tilt U.S. policy against Israel are a thing of the past.

“There was a time that being associated with oil made you automatically deemed hostile when it comes to Israel,” said David Makovsky, the Ziegler distinguished fellow at the Washington Institute for Near East Policy. “However, at a time that Israel and Gulf states are quietly pursuing common interests when it comes to enmity toward Iran, the Mideast is no longer zero-sum.  Hopefully, oil executives see this shift as much as the Arabs themselves.”

Makovsky recalled how one of President Ronald Reagan’s secretaries of state also had ties to one of the energy industry’s biggest builders of oil, chemical and natural-gas facilities.

“One should recall that when George Shultz came in, people thought his business connection to Bechtel projects in the Gulf made him hostile to Israel, and this did not prove to be the case,” he said. “I think a question Tillerson will be asked at the hearings beyond the focus on Russia is how does someone whose business background made him a skeptic on economic sanctions [against Iran] now be the one who will have to enforce them and even advocate for more in certain instances?”

That focus on Russia will involve scrutiny of Tillerson’s close ties to President Vladimir Putin. Tillerson led the expansion of Exxon’s joint drilling with Russia in recent years and has objected to sanctions imposed on the country over its invasion of Ukraine.

“We are unfamiliar with his larger geopolitical view of the world and America’s place in it,” the American Jewish Committee said in a statement on Tillerson’s nomination late Tuesday. The statement recommended to senators confirming Tillerson six areas of inquiry, including maintaining U.S.-Israel relations, containing Iran, supporting alliances in Europe and Asia confronting radical extremism and supprting human rights.

Morton Klein, the president of the Zionist Organization of America, said his anxiety was allayed to a degree by what he saw as the friendliness to Israel of Trump and his team.

“I had concerns about [Tillerson’s] closeness to Arab countries and to Russia, all of whom have been hostile to Israel,” Klein said. “But then again I wonder because of his close relations and because of President-elect Trump and the pro-Israel people around him, I’m hoping he will use some of these relations and turn their minds around.”

Steve Rosen, the former policy director for the American Israel Public Affairs Committee, recalled the 1990s battles with oil companies over sanctioning Iran — but said they were not ideological, and that Tillerson could well change his outlook once he changes jobs.

“It would be a little unnatural if a CEO with a company with material interest in the freedom of his company to engage in profit-making behavior” were to favor sanctions, he said. “Where you stand depends on where you sit.”

“Guiding operations around the world that include more than 200 offices, Mr. Tillerson knows how to manage a global organization and successfully navigate the complex architecture of world affairs and diverse foreign leaders,” Trump’s statement said. “As Secretary of State, he will be a forceful and clear-eyed advocate for America’s vital national interests, and help reverse years of misguided foreign policies and actions that have weakened America’s security and standing in the world.”

Nevertheless, Tillerson faces a tough nomination fight. And while Jewish groups have largely hesitated to critique Trump’s appointments, they will quietly be asking more than a few questions about Tillerson and what he signals about the president-elect’s foreign policy.

Trump wants to reset relations with Russia, saying it would be better to have them alongside the U.S. rather than rivals. The president-elect has boasted of his mutual admiration for Putin. What does that mean for Syria?

Like most of the world, Israel wants the carnage to end. Unlike Russia, it does not want the outcome to include the empowerment of Russia’s ally, the Assad regime. Israeli Defense Minister Avigdor Liberman, for one, says Assad must go. Israel also does not want Iran and Hezbollah — Assad’s allies  and, effectively, Russia’s — to come out of the deal strengthened.

Tillerson is on the record saying sanctions on Russia were counterproductive. What about Iran?

It’s not clear yet whether Trump is committed to scrapping the Iran nuclear deal or enforcing it more strictly than Obama did. And whatever one’s objections to the pact, which swapped sanctions relief for a nuclear rollback by Iran, the Obama team has enhanced sanctions in other sectors, with a special focus on targeting Iran’s Lebanon proxy, Hezbollah.

Jewish groups will want to know if Tillerson’s opposition to sanctions is a matter of principle, or is he against them because it affects his business now. Had he led Exxon Mobil in the 1990s, would he have joined in the oil industry’s fierce opposition to Iran sanctions introduced at that time?

Trump says he wants to broker a peace deal between Israel and the Palestinians. The Republican Party over the summer, in its convention platform, officially became agnostic about a two-state solution and said it would defer to Israel on whether this is the preferred outcome. Trump’s aides have said the same thing. The mainstream and left-wing pro-Israel communities, meantime, remain committed to a two-state outcome.

“We expect senators to question him vigorously to determine whether his views are consistent with decades of bipartisan U.S. support for a two-state solution to the Israeli-Palestinian conflict and with upholding our country’s international commitments, such as the successful nuclear agreement with Iran,” J Street, the liberal Jewish Middle East policy group, said in a statement.

(The centrist American Jewish Committee became the latest mainstream group to reassert support for the two-state solution, issuing a statement Monday calling it the “only realistic resolution to the Israeli-Palestinian conflict, as established through direct bilateral negotiations between the parties themselves.”)

Through his role at Exxon, Tillerson forged deep and friendly ties in the Arab world. How necessary does he believe a two-state outcome is to a lasting peace? Is he ready to relaunch negotiations between the Israelis and the Palestinians? The last round, in 2014, ended in a war between Israel and the Hamas-run Gaza Strip, and the rumblings of a third intifada in the West Bank.

Netanyahu has said that the common enmity Israel shares with Arab states against Iran has created an opportunity for a simultaneous deal – a broad peace deal with the Arab states that could encompass the Palestinians. Tillerson has had his ear to the ground in that region. Does he agree?

The Trump transition team in its statements Tuesday about the nomination depicted Tillerson as a petroleum executive who worries about climate change and the effect of big business on impoverished nations. It relayed excerpts from an Associated Press profile that dug up a quote in which Tillerson advocates for “sensible strategies that address these risks [of manmade climate change] while not reducing our ability to progress other global priorities such as economic development, poverty eradication and public health.”

The American Jewish World Service was not buying, and referred in a statement to Exxon’s alleged role in suppressing scientific evidence of manmade climate change.

“Tillerson’s nomination is deeply disturbing, as he is the leader of one of the world’s largest energy corporations — which has polluted the global environment, developed close relationships with dictators, and used its resources over 40 years to suppress climate science,” said AJWS President Robert Bank.