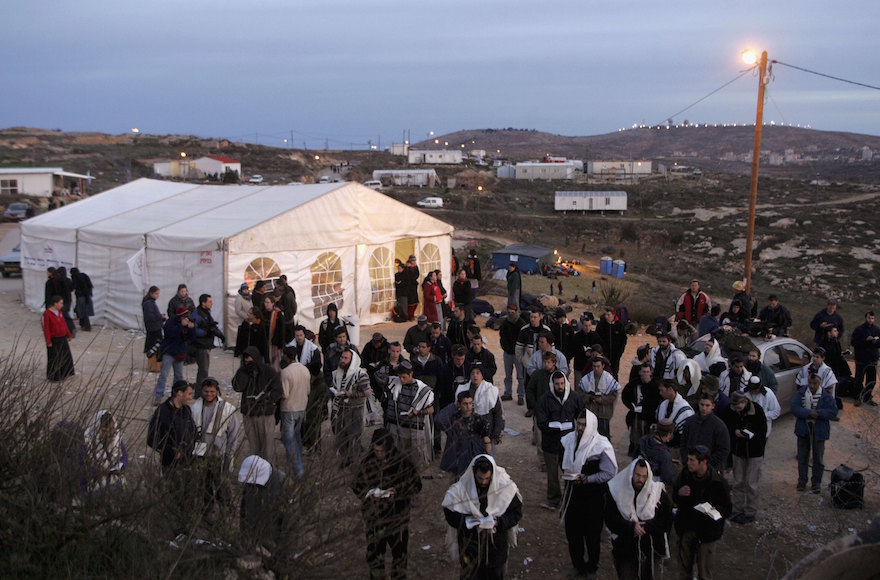 (JTA) — Calling his Cabinet “more committed than any other” to West Bank settlements, Israeli Prime Minister Benjamin Netanyahu urged the residents of Amona to leave peacefully ahead of the evacuation of their illegal outpost.

Netanyahu made the plea Friday on his Facebook page, where he posted an open letter addressed to the some 40 settler families of Amona, which the government is preparing to evacuate ahead of the Dec. 25 deadline handed down by the Supreme Court. The appeal also promised to demolish illegal structures built by Arabs.

“Dear Amona residents, my heart goes out to you,” Netanyahu wrote. “You and your families are experiencing difficult times, as does the entire People of Israel.”

The current Cabinet “is committed to settlements in Judea and Samaria. We are committed to it more than any other government in the country’s history,” wrote Netanyahu, who went on to detail its efforts to work out a compromise with the settlers who are refusing to leave the West Bank outpost.

“Our proposals were not accepted. Let us be clear: The State of Israel is run according to the rule of law. The court’s ruling is binding for all of us, the government included,” he said.

Netanyahu continued his conciliatory letter by assuring Amona settlers that he has “ordered to expedite the demolition of illegal construction” throughout Israel. He named the country’s center, along with areas with many Arab residents — the Negev, Wadi Ara and the Galilee — adding that demolitions will occur there “in the coming days already.”

This will happen to avoid there being “a double standard” on illegal construction “between Jews and Arabs and between people in general,” Netanyahu said. He said that such enforcement “was never applied” in the past and that he is “determined” to make it happen.

Netanyahu asked Amona settlers to refrain from violence and remove their children from the disputed grounds.

“I urge you to act responsibly: To not assault in any way Israel Defense Forces troops or security forces,” he wrote. “These are our boys, they are the apple of our eye, they are precious to all of us, they keep us all safe. There is no room for violence.”

Addressing parents with children in Amona, the prime minister added: “Your protest is understandable but this is no place for children or adolescents.”

Before concluding with the words “Shabbat shalom,” Netanyahu wrote: “Israel’s unity is sacrosanct and the source of our strength. We are one people. Brethren.”