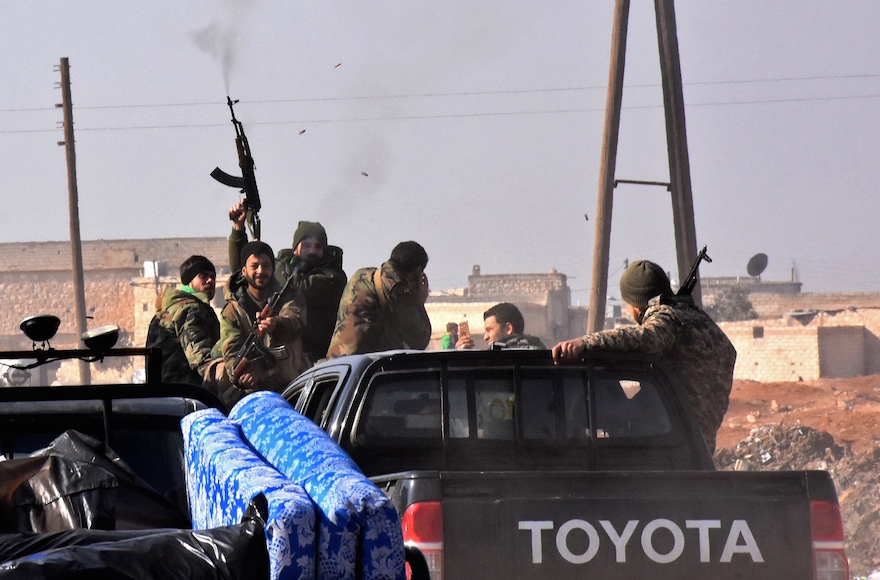 WASHINGTON (JTA) — The transition between the Barack Obama and Donald Trump presidencies is creating a vacuum that is increasing the threat of genocide in trouble spots, according to a top official at the U.S. Holocaust Memorial Museum.

Cameron Hudson, the director of the museum’s Simon-Skjodt Center for the Prevention of Genocide, told JTA that transitions in Washington and at the United Nations, where António Guterres replaces Ban Ki-moon as secretary-general next month, were distracting the institutions from genocides or potential genocides in Syria, Burma, Iraq and South Sudan.

“We’re facing a moment in time, with the U.S. and U.N. in transition, we’re faced with this moment where there could be a leadership vacuum,” Hudson said.

The intensified attacks by the Assad regime and its allies on the rebel stronghold of Aleppo in Syria, whose scenes of bloodshed are being widely shared on social media, was just the latest example of the kinds of mass atrocities detailed in a museum statement issued earlier this month.

Others include the U.S. government determination in March that the Islamic State was carrying out genocide against religious minorities in Iraq; the intensified Burmese military campaign against the Rohingya, the country’s Muslim minority, and the slaughter of civilians in South Sudan caught among the military, rebels and ethnic militias.

The Dec. 9 statement called on the United States and the international community to recognize “not only these very real threats, but also the dramatic side effects of our failure to address them.”

Hudson was responding this week to a request to expand on the statement. Some of the areas have been at risk; why put out the statement now?

He said the museum perceived that instruments put in place in recent years to counter genocide were being neglected. Samantha Power, the U.S. envoy to the United Nations, delivered an impassioned speech this week singling out envoys from Russia, Iran and Syria for the Aleppo atrocities, asking them,  “Is there literally nothing that can shame you?” But the outgoing Obama administration has not offered concrete proposals to end the carnage.

Hudson said the U.S. has the means to do so at its disposal. Three years ago, Obama created an Atrocities Prevention Board that brings together officials from an array of agencies to create a coordinated prevention strategy.

“It’s a locus of information sharing and decision-making,” he said.

It’s not clear what the fate of the board will be under a Trump administration, Hudson said, but he also emphasized that the museum’s concerns are not about Trump’s policies, and would be expressed whatever transition was underway because of the coincidence of four regions enduring genocides or similar crimes.

“We often talk about genocide being a very rare event, but we’re seeing a rare moment now where the Islamic State is carrying out genocide against religious and ethnic minorities in Iraq and a high and mounting threat of genocide in South Sudan and Burma – we’ve seen recently both situations take a turn for the worst. And everything going on in Aleppo, in Syria, is a crime against humanity,” he said.

“When you see these crimes being committed, it requires a robust response.”

Nonetheless, Hudson appeared to tailor his message to concerns that Trump expressed on the campaign trail about what he saw as deteriorating national security standards, and the president-elect’s rejection of the notion that America should intervene overseas as a moral matter and not simply out of self-interest.

“We are less safe when we allow situations unfolding in Syria, in South Sudan,” he said. “They undermine democratic norms, create refugee outflows, create a breeding ground of ungoverned spaces.

Jewish groups in recent days have responded to the crisis in Aleppo, where Syrian troops, backed by Russian and Iranian allies, are clearing out the last pockets of resistance to the regime of President Bashar Assad. There have been reports of summary killings of civilians who had been promised safe passage.

The Jewish Council for Public Affairs, the umbrella body for the community’s public policy groups, condemned the atrocities, saying, “Never again means never again for everybody,” referring to the phrase Jews invoke to ensure that the Holocaust is never repeated.

Other Jewish groups also alluded to world inaction during the Holocaust.

“We know all too well from history the tragic consequences of governments that failed to find the will to act in the face of such unspeakable crimes against humanity,” said David Harris, the American Jewish Committee CEO.

“The complexity of the conflict cannot be an excuse for continued inaction in the face of increasing atrocity,” Jonathan Greenblatt, the Anti-Defamation League’s CEO, said in a blog post this week.

Israel’s defense minister, Avigdor Liberman, has called Assad a “butcher” and for his removal, and a number of Jewish groups will hold rallies worldwide to protest the atrocities.

Hudson wondered if people were not growing inured to the tragedy, seeing it unfold in real time on TV and in social media postings from the conflict zones.

“There really has been no conversation I’ve seen to prevent “ genocide in Syria, he said. “For someone who studied the Holocaust and past genocides, that’s a staggering revelation.

“It used to be said, ‘had we done more, more would have been done.’ We can no longer make that argument now — we can’t know any more than we already know of what’s going on in Aleppo. But knowing has not translated into a response.”