Do Germans wish each other ‘Shanah Tovah’ on New Year’s Eve? 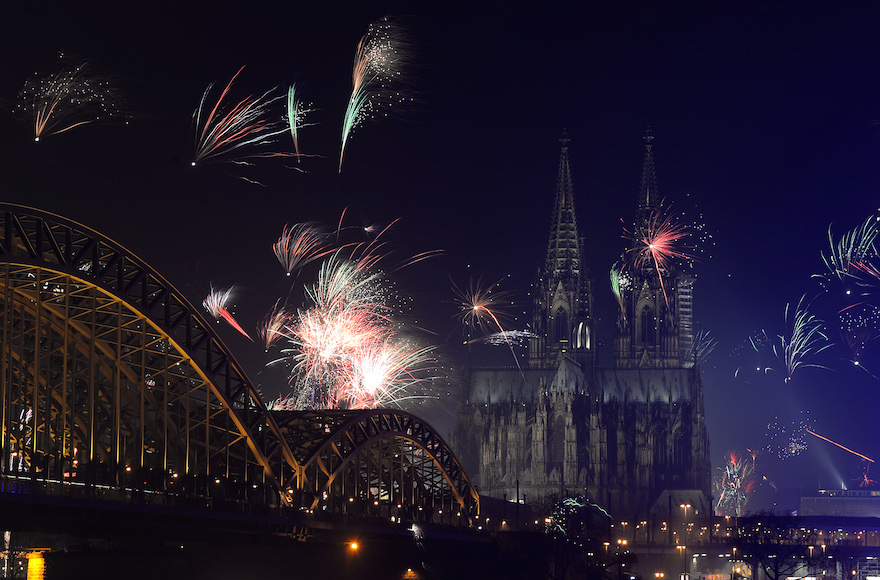 (JTA) — While the rest of the world is busy exchanging Happy New Year wishes, Germans are greeting each other with a peculiar expression: “guten Rutsch,” which means “good slip.”

Some believe the greeting, which is especially unusual in a formal society such as Germany’s, is a lighthearted reference to the country’s ice-glazed streets, possibly born of superstition similarly to how performers wish each other “Break a leg!” before taking the stage.

Unbeknownst to many German speakers, however, numerous etymologists and history enthusiasts trace the greeting back to the Jewish New Year, Rosh Hashanah, arguing that guten Rutsch is one of hundreds of influences on Germanic languages by that family’s Semitic maverick, Yiddish.

The case for viewing “Rutsch” as a distortion of “Rosh” relies partially on the fact that guten Rutsch is a relatively new expression, having first been documented circa 1900.

This fits the Yiddish-origins theory because the late 19th century was a period of relative openness and cross fertilization between Jewish and German cultures following the Haskalah, or Jewish Enlightenment, movement. It was also a period of mass immigration to Western and Central Europe by Yiddish speakers fleeing pogroms in czarist Russia.

One of the first linguists to link guten Rutsch to Yiddish was Siegmund Wolf. In his 1956 “Dictionary of Rotwelsch” — a southern dialect of German spoken by traveling merchants with heavy Yiddish influences, including in the word for “eating” (“acheln”), as well as daytime (“jom”) and nighttime (“leile”) — he wrote that “the meaningless greeting” of guten Rutsch originates from the Rosh of Rosh Hashanah.

Andreas Nachama, a German historian, publicist and rabbi, also traces guten Rutsch to the Jewish holiday — albeit without any reference to the Rotwelsch dialect — in his 1994 book “Yiddish in Berlin Dialect.” Rather than reference a slip, the greeting is “better understood as a good beginning of the year, or Rosh,” he wrote, using the Hebrew word for “head.”

Other contemporary linguists who accepted the Yiddish origins theory of guten Rutsch include Heidi Stern, Leo Rostens, Alfred Klepschs and Petr Subrt, according to an article about this etymological question by the German linguist Christoph Gutknecht published in the Judsiche Algemeine German-Jewish weekly in 2014.

Yet in the article, Gutknecht challenged this guten Rutsch theory, noting that German Yiddish speakers pronounced the Jewish holiday as “Rausch haschono” — a pronunciation that is further removed from Rutsch and thus does not agree with the Yiddish origins theory.

Ute Limacher-Riebold, another linguist who has studied the Rutsch mystery, noted in a 2013 article about it on her blog that while it “seems to originate from the Hebraic Rosh Hashanah,” Yiddish speakers in Germany refer to the Christian new year as “shone chadoshe” — a phrase meaning “new year” that sounds nothing like Rutsch.

In their dictionary, the German 18th-century storytellers Wilhelm and Jacob Grimm use the word Rutsch to describe a journey, Limacher-Riebold notes. This could mean that the present-day greeting is simply to wish others a pleasant transition, or slide, into the new year.

But even if guten Rutsch didn’t originate from Yiddish, there is little doubt that Germanic languages have seen significant influences from the Jewish lingua franca of Europe prior to the Holocaust. Yiddish now survives on the continent in isolated pockets with haredi Orthodox Jewish populations such as London, Antwerp and Vienna.

In his 2005 “Encyclopedia of German Words of Yiddish Provenance,” the linguist Hans Peter Althaus compiled a list of 1,100 German-language words of Yiddish origin. His list includes obvious borrows like “schlamassel” and “meschugge” — German words meaning “failure” and “crazy person,” respectively — but also more subtle contributions like “macke,” slang for the “loose screw” (as in crazy), that comes from the Hebrew and Yiddish words for a “hit” or “kink.”

The word “miese,” which means bad weather, comes from “misken” in Yiddish, meaning “poor.” More positive words made it across the linguistic divide, too, including the adjective “betucht,” from the Yiddish word for “safe,” to describe well-off neighborhoods.

Meanwhile, in the Netherlands, the Yiddish “tov” gave Dutch speakers the somewhat overused word “tof” — an adjective that is sometimes also used as an exclamation meaning “good” or “wonderful.” Indeed, to this day Amsterdam, once a major hub for Jewish learning and culture, is known locally as “mokum” – the Yiddish word for “place.”

Which is why Gutknecht — the linguist who doubts the purported Jewish roots of guten Rutsch — was able to end his skeptical article on this issue in Judische Algemeine with a conciliatory note.

“Please do not be too disappointed,” Gutknecht wrote in reference to the possibility that the holiday greeting isn’t of Jewish origins. “Given the wealth of German words with Jewish origins, you can afford to let go of ‘guten Rutsch.’ I wish you therefore simply a Happy New Year.”