This 15-year-old Orthodox girl is a pingpong champion 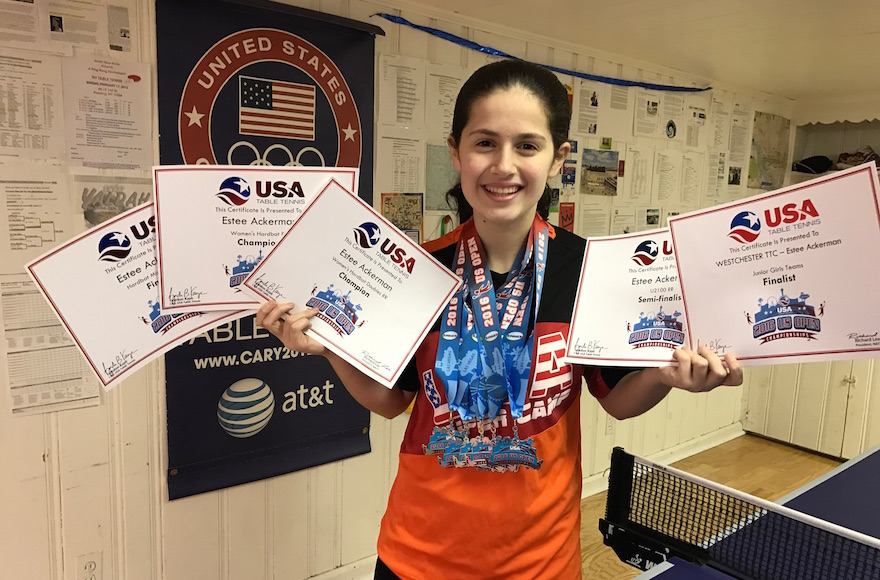 Like many Orthodox Jewish teens, Estee Ackerman was raised around a basement pingpong table, a traditional gathering spot for Sabbath-observant kids on long Saturday afternoons.

But unlike her peers, she took her avid interest in the game to professional clubs, coaches and, eventually, tournament championships. Earlier this month, the Long Islander won five medals — including two golds — at the U.S. Open Table Tennis Championships in Las Vegas.

“In table tennis, anyone can beat anyone,” Ackerman told JTA. “In basketball, when you’re taller, you have a much, much bigger advantage. In pingpong, it’s so different. It doesn’t matter about your age. It’s hysterical when me and the other teens are beating 30- and 40-[year-old] big, strong men.”

Ackerman, on her winter break from the Yeshiva University High School for Girls in Queens, was dressed in a long skirt and a loose fitting T-shirt with the letters USA emblazoned on the front. The skirt, standard dress for modern Orthodox girls like her, didn’t stop Ackerman from schooling her dad (and, um, this reporter) with a series of serves that spun so hard, they skid across the basement floor after bouncing off the table.

But her favorite move? The smash, mid-volley.

“At the tournaments people are not surprised because they all expect a hard competition,” she said. “They don’t care what your age is.”

Still, she added: “I wouldn’t say I get bored of people saying, ‘Oh, I can’t believe a 15-year-old player can be great.’”

Ackerman’s interest in pingpong stems from her father, Glenn, who set up the table in the basement of the family’s West Hempstead home seven years ago. The idea was to give Ackerman and her brother, Akiva, some consistent physical activity. But after his watching 8-year-old daughter improve after playing just a couple times a week for an hour or so, Glenn Ackerman took her to a nearby table tennis tclub for lessons from a professional.

“She had a talent, a knack for the sport,” Glenn Ackerman said. “More so, I saw she had the desire to work hard. I always choose hard work over talent. She’s willing to practice endless hours.”

In Vegas, Ackerman took home two gold medals in what’s called “hardbat play” – games where the paddles don’t have any padding. She is ranked in the top 30 among U.S. female players under 18.

“I was overwhelmed when I won the event,” she said of one of her gold medals. “This lady I played — it’s like my dad playing John McEnroe.”

Earlier this year, Ackerman was one of the final 16 qualifiers for the three-person U.S. women’s Olympic table tennis team that competed in Rio de Janeiro. She didn’t make the squad, but hopes to compete at the Tokyo Olympics in 2020.

Ackerman’s table tennis training contends with a school day that ends past 5 p.m., as well as obligations to her school’s girls’ junior varsity basketball team — incidentally, she is the leading scorer. While she trains every evening, she also has an abridged practice schedule. On Shabbat and Jewish holidays, Ackerman will play the game with friends, but only for fun in her synagogue clothes, not the T-shirt and shorts she wears while competing. Nor does she run any practice drills or work with coaches. This way, she’s not doing anything that could be construed as work.

“If my friends come over, I’ll go down and have some fun with them,” she said. “They get a good laugh out of it. I wonder how much better of a player I would be if I played on the holidays and Shabbat.”

Ackerman and her dad hope to bring the sport out of informal Shabbat play into Jewish day schools. Its versatility – unfettered by weather or the players’ physical size – could lend itself to league play, something several Jewish schools have organized for other sports.

But unlike in China, where table tennis is among the most popular sports, Glenn Ackerman believes it is shunned as a serious pursuit in the U.S.

Ackerman’s ban on playing on the Sabbath extends to tournaments — in 2012, she had reached the round of 16 at an event, only to forfeit a match when it began too late on a Friday evening. She and her father now try to mitigate potential conflicts by asking tournament organizers to refrain from scheduling at least one key event on Friday night or Saturday.

“I said to myself, this situation was going to happen to me one day,” Ackerman recalled. “I had to choose my religion or the love of the sport. On Shabbat, to be in my uniform, to go down to be competing in a national tournament, this is not in the spirit of Shabbos. This is not what Hashem would want me to do.”

Following her decision to sit out the match, Ackerman was honored by several Jewish groups, including the Chabad-Lubavitch Hasidic movement, and Meor, an Orthodox Jewish campus group. She has played table tennis at the benefit dinners of a few Jewish organizations, facing off against guests clad in black tie.

But one of Ackerman’s most exciting matches was against Nadal when she was 11. They were brought together during a promotional event ahead of the 2013 U.S. Open Tennis Championships. Nadal won that tournament, besting Novak Djokovic. But he couldn’t beat Ackerman.

“He was a little surprised at me,” she said. “He didn’t expect a little American girl to be good at pingpong. Him being the best tennis player in the world, I thought he knew how to play.”

Ackerman paused before adding: “But I won most of the points.”