Trump doubles down on ‘Nazi’ tweet at news conference 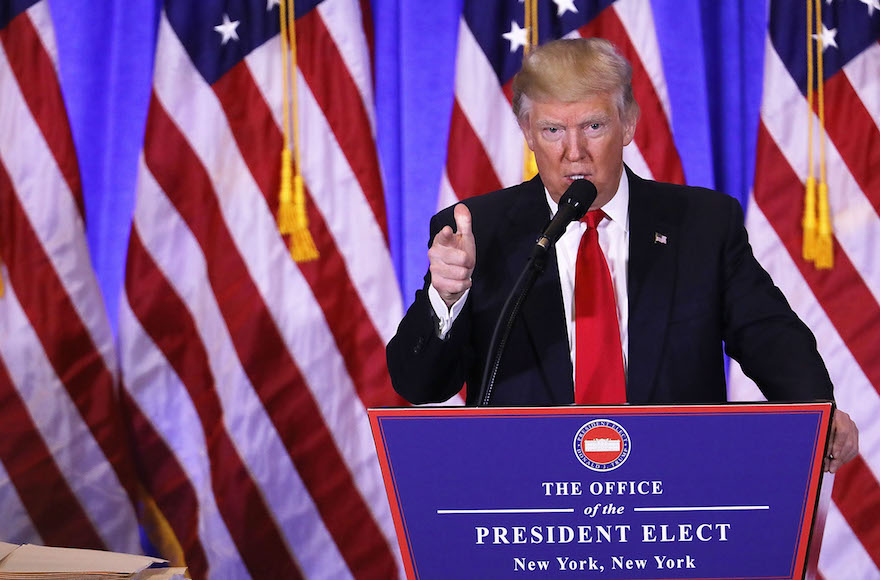 (JTA) — President-elect Donald Trump defended a tweet he posted comparing the leak of a dossier containing allegations about him to the actions of Nazi Germany.

At a news conference Wednesday, Trump said leaking such intelligence “is something that Nazi Germany would have done and did do.”

Reports came out Tuesday claiming Russia has a dossier with compromising personal and financial information about Trump. A two-page summary of the dossier was attached to a U.S. intelligence report on Russian interference in the 2016 presidential election. The summary was first reported by CNN.

The dossier reportedly includes memos — their credibility has not been substantiated — describing sex videos of Trump and prostitutes at a Moscow hotel in 2013, allegedly recorded for use as leverage against the new U.S. president.

On Wednesday morning, Trump tweeted that the reports were “fake news” and blamed intelligence agencies for the leak of the documents.

Intelligence agencies should never have allowed this fake news to "leak" into the public. One last shot at me.Are we living in Nazi Germany?

Critics pounced on Trump following the tweet. Anti-Defamation League CEO Jonathan Greenblatt said in a statement that “it is not only a ridiculous comparison on the merits, but it also coarsens our discourse and diminishes the horror of the Holocaust.”

Trump attacked the report throughout his news conference Wednesday, his first since being elected. He called publications that published the dossier “disgraceful.”

“That should never have been written, never been had and never been released,” Trump said. “It’s all fake news, it’s phony stuff, it didn’t happen.”

Trump also discussed his vision of relations with Russia, his plans to keep manufacturing in the United States, and his intention to repeal and replace the Affordable Care Act, known as Obamacare. An attorney for Trump unveiled the president-elect’s plans to relinquish management of his businesses, but not his ownership, to his sons.