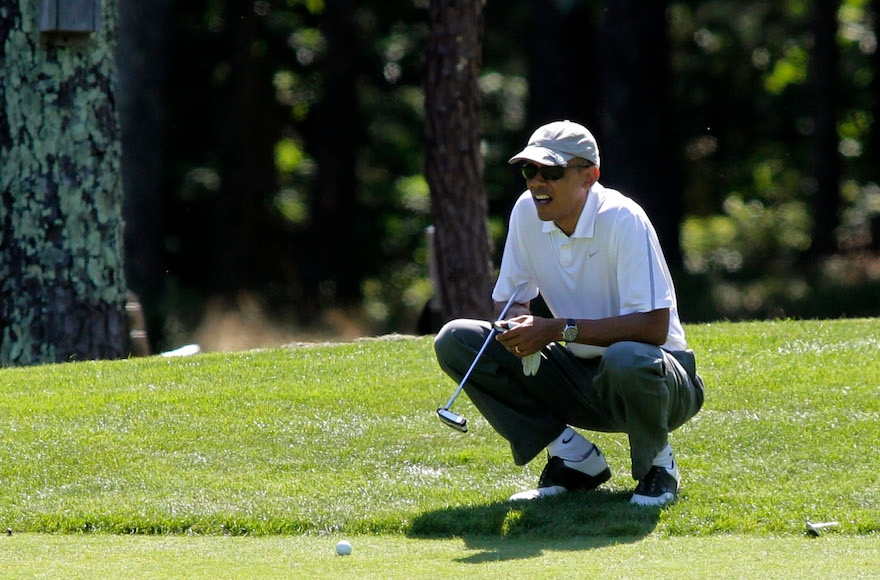 (JTA) — A Democratic activist has resigned his membership from an exclusive, mostly Jewish golf club in Maryland following a contentious debate over whether to admit President Barack Obama for membership because of the U.S. decision to abstain from a U.N. vote against Israeli settlements.

Jeffrey Slavin resigned from the Woodmont Country Club in Rockville in an email to the club’s general manager, the Washington Post reported Monday. Slavin also is the mayor of the Montgomery County town of Somerset.

He wrote in his email, sent Monday, which was Martin Luther King Jr. Day:

“I can no longer belong to a community:
Where Intolerance is accepted,
Where History is forgotten,
Where Freedom of Speech is denied,
And where the nation’s first black president is disrespected.”

Some members of the club have said they would not welcome Obama for membership, citing his decision not to veto the anti-settlements resolution at the United Nations Security Council.

Slavin told the Post that he has spoken to many other country club members who say that Obama should be welcome, but that they would rather stay in the club to make that happen rather than resign.

Obama has played at the club four times during his presidency. He has not indicated whether he will seek a membership at the club.

Slavin said he wants the club to state publicly that Obama is welcome as a member even before he decides to ask for membership.

“I decided that unless someone did something bold, the club would do nothing,” he told the Post. “I felt I couldn’t let this go on any longer.”

The Obamas are planning to remain in Washington, D.C. after Donald Trump is inaugurated for presidnet on Jan. 21.

The New York Post was the first to report the dispute.