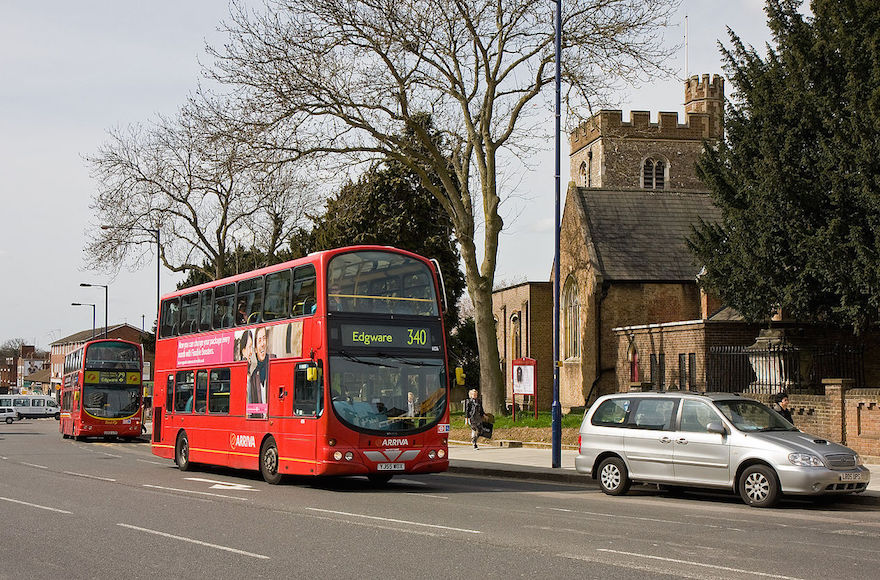 A view of Station Road in the Edgware neighborhood of London. (Wikimedia Commons)
Advertisement

(JTA) — A series of anti-Semitic attacks hit north London over the weekend.

The incidents included a brick with images of swastikas and anti-Semitic messages thrown through the window of a Jewish home in the Edgware neighborhood on Saturday morning. Hours earlier in the same neighborhood, a group of identifiably Jewish people were pelted with eggs while walking home from Shabbat dinner.

Also, swastikas were discovered drawn on a property in the borough of Barnet; a city-owned garbage bin was defaced with anti-Jewish invective, and a poster for the film “Denial” was vandalized with graffiti. The film deals with Holocaust denier David Irving’s legal case against scholar Deborah Lipstadt, who won her case.

The attacks were intended to “instill fear” in the Jewish community, the Shomrim volunteer security group told the Jewish Chronicle.

“These cowardly anti-Semitic attacks targeted Jews when they were asleep in their homes or walking with their families after dinner. These attacks are intended to instill fear in London’s Jews,” Gary Ost, the CEO of Shomrim North West London, said in a statement.

“The best response to these disgusting acts is to ensure that the perpetrators are caught. We are working closely with the Metropolitan Police Service and appeal for any witnesses to contact police or Shomrim.”

Scotland Yard said officers were investigating the incidents, the Evening Standard reported, including viewing footage from surveillance cameras near the incidents. Police also were adding patrols in the areas to reassure residents, according to the newspaper, citing Scotland Yard.

The London Metropolitan Police reportedly is investigating the incidents as hate crimes.

Stephen Silverman, director of investigations and enforcement for the Campaign Against Anti-Semitism, in a statement called the incidents “hit-and-run attacks on Jewish families at night.”

“Anti-Semitic crime is on the rise and these cowardly attacks must lead to arrests and convictions,” he said. “Jewish families in our capital should not be living in fear of anti-Semitic attacks.”