This new kosher deli may be Miami’s hippest restaurant MIAMI (JTA) — The first few weeks in January were meant to be a soft opening for Zak Stern’s new traditional deli. But given the massive following that Stern — better known as Zak the Baker — has garnered for his bakery, things didn’t really turn out as planned.

“We call it a ‘rough opening’ because there’s nothing soft about it,” Stern told JTA on a recent Monday morning as “the deli,” as it is known to differentiate from the bakery, began filling with customers eager to try the house specialties, like a vegetable omelette, served with corned beef and aioli, potato kugel and more.

Of course, the instant success of Stern’s deli isn’t too surprising given that Zak the Baker — both his bakery and the man himself — have garnered numerous accolades since setting up shop four years ago. A line of customers, often dozens deep, regularly snakes around the block outside the bakery. The customers wait — sometimes for an hour or more — for his olive-studded loaves of bread, authentic French-style baguettes, croissants and deep-dish quiches.

Stern has achieved the seemingly impossible: His eateries are decidedly cool and are popular with Miami’s hipsters and foodie sets. At the same time, however, because they are kosher, they are a destination for observant Jewish Miami residents and visitors, many of whom travel about 20 minutes from the city’s more touristy areas to the Wynwood neighborhood north of downtown.

“Wynwood is one of Miami’s only counterculture areas,” Stern said of the artsy, industrial neighborhood, where many buildings are covered with bright graffiti. And with the opening of the deli, he’s doubled down on it.

“We’ve been able to bridge two worlds,” said Stern, who looks every bit the bearded hipster, but could also pass as a Hasid (which he is not). “It’s hard to find the religious world eating out of their shtetl, and it’s also hard for the nonreligious world, or non-Jewish world, to interact with the religious world. So this kind of gives them the opportunity to sit next to someone religious and fill in the blanks. It’s a beautiful thing.”

On that recent Monday morning, a couple visiting from New Jersey — she wore a wig; he a baseball cap in place of a kippah — were enjoying an almond croissant and oatmeal cookie at the bar of the bakery, both nodding profusely between bites to communicate that it was worth the nearly 30-minute trip.

Another woman, who didn’t outwardly appear to be religious, had just bought a loaf of cranberry walnut bread at the bakery, having traveled to Miami from her home about an hour away. In fact, she said she often drives 20 minutes to her nearest Whole Foods to procure some wholesale Zak the Baker bread.

“Once you have this, how can you have any other one?” she asked, rhetorically.

While chefs like Yotam Ottolenghi in London and Michael Solomonov in Philadelphia have helped make Israeli food “the sexy thing on the block,” Stern thinks it’s time for Ashkenazi food to get the attention it deserves.

“Ashkenazi food has been relegated to bland and boring, and that’s so not true,” he said. “Deli is a soulful, soulful food. I think we can shed some light on it.” 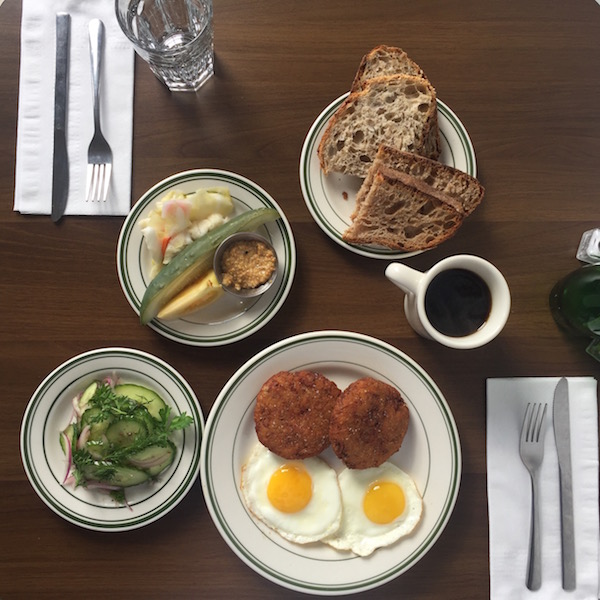 The deli’s breakfast platter (Courtesy of Zak the Baker)

Stern, a 31-year-old Florida native, was a pharmacy student when he decided to switch gears to bread baking.

“I was a 22-year-old in pharmacy school learning all these complicated things but I was craving basic fundamental life skills; bread making is such a symbol of that,” he said. “You can bake bread everywhere, and it’s accessible to everyone.”

Stern quit school and went to Europe to apprentice on farms. He started with agriculture and then “zeroed in on farms with bread and cheese,” he said.

When he returned to Miami, in 2012, Stern launched a bread business out of his friend’s North Miami garage, selling to farmer’s markets and the like. Word of mouth sent the business soaring.

“The market quickly drew a line, until the point where I was selling out of bread in less than an hour,” he said.

At one point, a woman Stern met while working at a goat cheese farm in northern Israel asked to come to Miami and apprentice for his burgeoning business. Fast forward three years and that woman, Batsheva, is now his wife and mother to his two children. He refers to her on social media as #myreligiouswife.

As a suburban kid who grew up Reform, marrying a religious woman from a small village in Israel is practically intermarriage, Stern said, noting how differently the two were raised. She is the reason he started keeping Shabbat, “so she wouldn’t be alone,” he said.

And it was Batsheva who introduced him to kashrut; because of her strict observance, he made his bakery kosher. And in the years since, Stern has learned all the intricacies of running a kosher business.

Being kosher, he said, brings a real authenticity to the deli, in particular.

European delis that catered to our great-grandparents would not have served melted cheese on their sandwiches — nor would they have sold expensive sandwiches as big as your head, he said. They also would have cured their meats in house, as Stern does.

“The community here in Miami, I think, needed something that’s wholesome and soulful,” he said. “Delis aren’t fancy or expensive, as a lot of kosher restaurants are. Deli food is the working man’s food.”

For now, the menu at the deli is limited, as the kitchen undergoes renovation. (The spot where the deli stands was once the bakery, which was forced to move to a larger location down the street when the wholesale business picked up.)

But Stern said there were a couple of things he knew the deli needed to have as soon as they launched — “a really good pickled vegetable plate with a pickled green tomato, a non-mayonnaisey cole slaw and house-made corned beef,” he said. (Stern’s corned beef is made on the premises in a seven-day brine.)

There’s also smoked fish — and, unlike New York delis, which mostly use whitefish, they use the blue runner native to Florida.

Stern is particularly excited for the upcoming deli case with traditional Eastern European foods like Yapchik (a kugel with flanken), p’tcha (jellied calves’ feet) and kishke (stuffed intestine), which people can take to go.

“Whatever obscure Ashkenazi food that you can’t find anywhere, we’ll have here,” he said.

But for those outside the Miami area, you’re going to need to travel to try it out.

“I’m totally uninterested in creating an empire,” he said. “Zak the Baker doesn’t need to be in New York, it doesn’t mean to be in L.A. There’s plenty of room for other bearded bakers.”