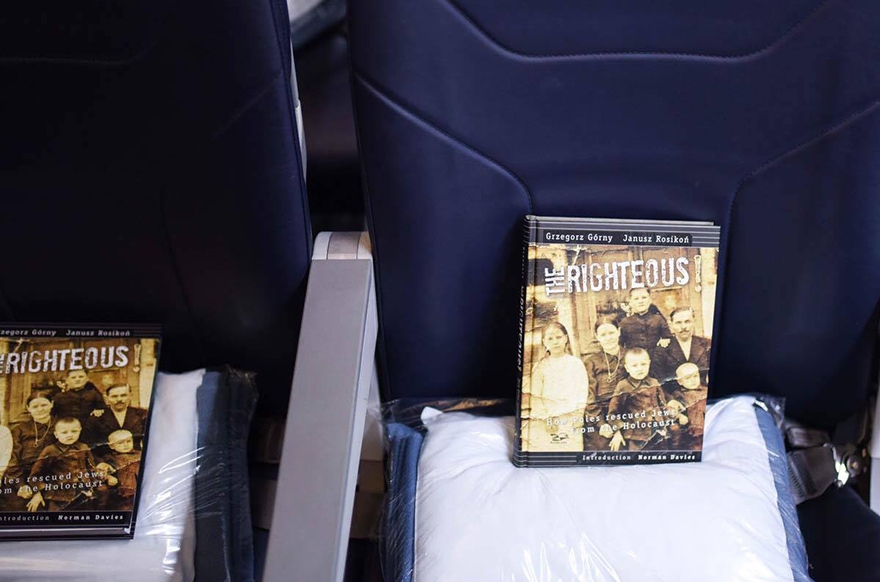 Books laid out for passengers of a LOT flight from Tel Aviv to Warsaw on Jan. 27, 2017. Courtesy of From the Depths

(JTA) — Poland’s national airline, LOT, commemorated the Jewish genocide for the first time aboard a plane bound from Israel to Warsaw on International Holocaust Remembrance Day.

The chief attendant of the flight, which took off Friday — the 72nd anniversary of the liberation of the former Nazi death camp Auschwitz in Poland by the Red Army — made a short announcement honoring the 6 million Jews killed in the Holocaust.

Each passenger received a copy of a book recounting the story of non-Jewish Poles who risked their lives during the Holocaust to save Jews, which Poland’s Adam Mickiewicz Institute donated to LOT for the occasion.

“This morning’s flight from Tel Aviv to Warsaw will connect Israel and Poland in a special way,” the crew attendant, Teresa Wodzinska, said in the beginning of her announcement, which she ended with the word “shalom.”

“This small action is a strong symbol of our two nations becoming closer again,” Jonny Daniels, the founder of From the Depths, said in a statement about the gesture initiated by his commemoration group. Amid the prevalence of anti-Israel sentiment in some parts of the world and the rise of anti-Semitism, he added, “it is beautiful to see that Poland is standing by us.”

Separately, dozens of Auschwitz survivors placed wreaths and flowers at the infamous execution wall of the former death camp on the annual commemoration ceremony held here on Jan. 27.

Many Polish non-Jews were executed there, in addition to 15,000 Soviet prisoners of war and 1.1 million Jews and 25,000 Roma who were killed in gas chambers, shot and starved to death.