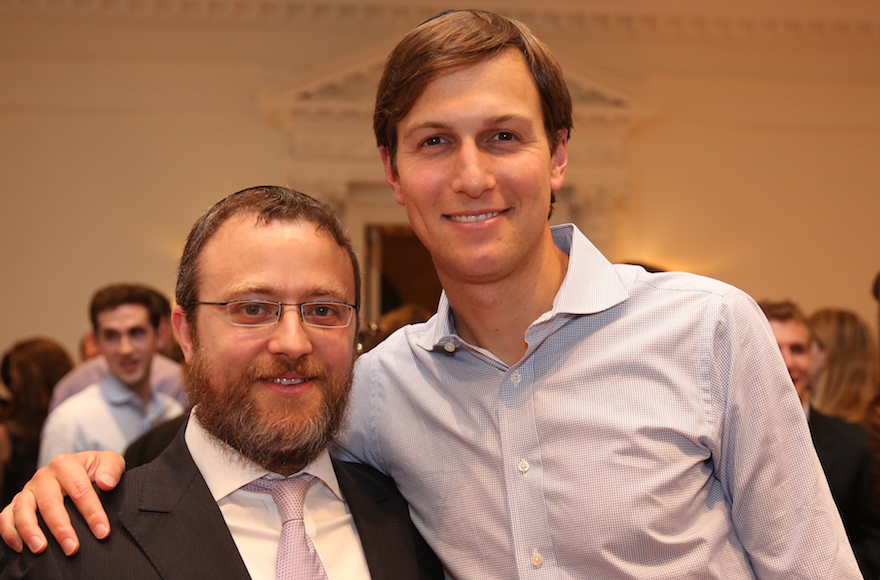 (JTA) — Jared Kushner was already a regular at the Harvard Chabad when he walked in one day, took a crumpled piece of paper out of his jacket pocket, put it down on the table and walked away.

“’I have some deals that really went well, so I want to give something back to Chabad,’” Harvard Chabad Rabbi Hirschy Zarchi recalls Kushner, then a sophomore or junior, saying. Zarchi calls it “one of the largest checks we ever received, not just from a student, but even from a parent.”

Kushner, now son-in-law and senior adviser to President Donald Trump, established a constant, outsize presence at the Harvard Chabad during his time as a student there, Zarchi and other students recall. Beyond the surprise donation, Kushner attended prayers and Shabbat dinner regularly, recruited students to Chabad’s programs, performed workaday tasks for the house and served as the emcee when Chabad dedicated a new building in 2003.

On a personal level, Kushner was a “like a part of the family” to Zarchi and his wife, Elkie, the rabbi says. From his earliest days at Harvard through his senior year, Kushner attended the Zarchi children’s birthday parties, sent flowers to the family and received chicken soup from Elkie Zarchi at his dorm when he came down with the flu.

“It was most apparent in the first impression what kind of mensch this young man was,” said Zarchi, now 43, who was unabashed in his praise of Kushner. “How considerate and how polite and respectful and appreciative he was at that age. He was always years beyond his age in the way he carried himself, the way he related to others, the way he led.”

In the years since Kushner came to Harvard, his family has donated hundreds of thousands of dollars to Chabad-Lubavitch institutions in the United States and Israel. In 2007, according to Ha’aretz, his family’s charitable foundation gave $150,000 to the institution.

Chabad arrived on Harvard’s Cambridge campus in 1997, two years before Kushner’s freshman year. Run by emissaries of the Chabad-Lubavitch Hasidic movement, campus Chabads offer Orthodox ritual services and Jewish programs to students of all backgrounds, often as an alternative to Hillel, the legacy nondenominational Jewish campus organization. Chabad has built a sizable following among Jews who, like Kushner and his modern Orthodox parents, may not be Hasidic themselves but support its programs and outreach efforts.

Speaking at the 2003 dedication, the 22-year-old Kushner, dressed in a suit, blue tie and small black kippah, stood in front of a small room filled with students, rabbis and donors. Kushner’s father, New Jersey real estate mogul Charles Kushner, sat smiling in the front row. Jared complimented Elkie Zarchi’s cooking, quoted Margaret Thatcher and praised the Chabad’s feeling of community. At the end of his speech, he embraced Rabbi Zarchi.

“When people walk into your home, they enter as guests,” Kushner said to the Zarchis, occasionally stumbling over his words. “After conversing and experiencing your warmth, there is not a person who does not leave as another one of your children. We are all grateful for the selflessness and dedication that both of you show on a daily basis.”

Kushner’s relationship with Chabad began when he visited campus for a pre-freshman weekend and attended Shabbat dinner. During the subsequent four years, Zarchi says, Kushner was instrumental in bringing undergraduates to Chabad, which had been geared to graduate students. Two people who attended Harvard with Kushner told JTA that he was quiet, unassuming and dedicated to the Chabad mission.

Kushner would bring friends to Friday night dinner from the Fly, his “final club” (or Harvard-style fraternity), and would sometimes perform yeoman’s work for the rabbi. One night during his freshman year, after spending a few hours with Zarchi studying Tanya, a Jewish mystical text, Kushner saw it had snowed outside, asked for a shovel and cleared the sidewalk in front of the house.

“When he saw importance in a project, he committed himself to it,” Zarchi said. “He was able to galvanize his friends and his social circle to follow and collaborate with him. If he got involved in the project, he worked the hardest. There was no task beneath him and no goal too high to reach.”

Since his graduation nearly 14 years ago, Kushner has stayed connected to Chabad. He has helped organize the institution’s alumni events, including a Shabbat dinner that he and his wife, Ivanka Trump, hosted a few years ago. In 2004 and 2005, while Kushner’s father was on trial in New Jersey for illegal campaign contributions, witness tampering and tax evasion, the family would occasionally eat Friday night dinners with the Zarchis at Harvard Chabad while Kushner’s brother, Joshua, was a student at the Ivy League school. Charles Kushner served 14 months in prison for the charges.

During that time, Zarchi said, Kushner displayed the same total fealty to family that led him to shepherd his father-in-law to the unlikeliest of election wins.

“You rarely see someone who’s more committed, more loyal to his family, than Jared was,” the rabbi said.

Kushner and his wife have bought a home near a Chabad house in Washington, D.C., and Zarchi and Kushner have stayed in touch during and since Trump’s campaign. One week before the inauguration, the two spoke on the phone. Zarchi recalls Kushner saying how he felt humbled by his new role, and excited for the opportunity he has in the White House, where according to Trump he would work on the Middle East peace process.

For his part, Zarchi isn’t surprised by where his student now finds himself.

“You get used to that with Jared,” Zarchi said. “He’s on the stage doing things. Whatever field it was, on the highest level, it’s Jared being Jared.”