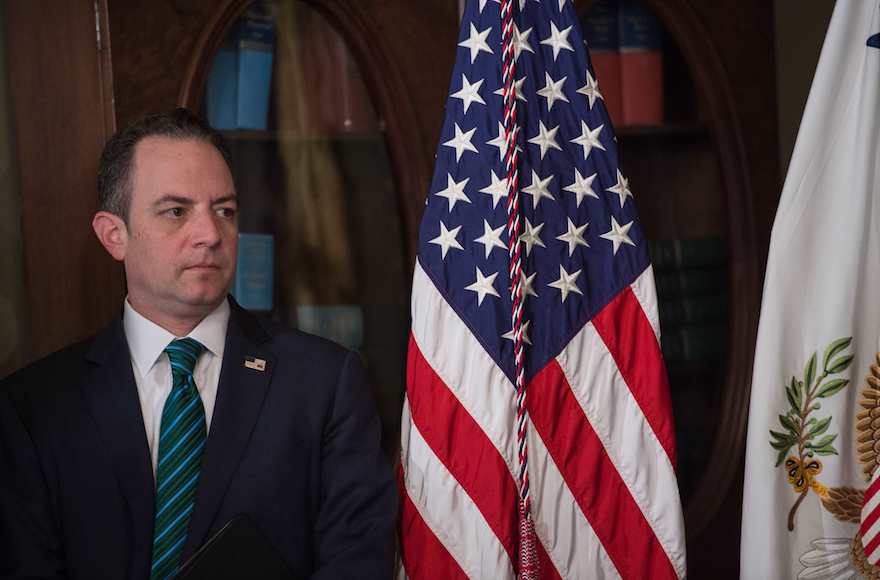 White House Chief of Staff Reince Priebus attending the swearing in of Nikki Haley as U.S. ambassador to the United Nations in the Vice President’s Ceremonial Office at the Eisonhower Executive Office Building, Jan. 25, 2017 in Washington, DC. (Nicholas Kamm/AFP/Getty Images)

(JTA) — White House Chief of Staff Reince Priebus said the administration did nothing wrong by not referencing Jews in its statement for International Holocaust Remembrance Day.

Priebus said in an interview Sunday on NBC’s “Meet The Press” that the statement issued Friday did not “whitewash” anything, despite not mentioning that 6 million Jews were systematically killed during the Holocaust.

“I recognize, in fact, obviously that that was what the Holocaust was about,” Priebus said when host Chuck Todd pressed him on the Jewish genocide at the heart of the Holocaust. “It’s a horrible event. And obviously a miserable time in history that we remember here at the White House and certainly will never forget the Jewish people that suffered in World War II.”

He said that “there was no harm or ill-will or offense intended” by leaving Jews and anti-Semitism out of the statement, and added.

“Everyone’s suffering in the Holocaust including, obviously, all of the Jewish people affected and the miserable genocide that occurred is something that we consider to be extraordinarily sad and something that can never be forgotten and something that if we could wipe it off of the history books we could. But we can’t,” he said.

Priebus pointed out that President Donald Trump “has dear family members that are Jewish,” apparently a reference to his son-in-law Jared Kushner and daughter Ivanka, who converted to Judaism before her marriage.

“It is with a heavy heart and somber mind that we remember and honor the victims, survivors, heroes of the Holocaust,” Trump said in a statement issued by the White House on Friday, International Holocaust Remembrance Day. “It is impossible to fully fathom the depravity and horror inflicted on innocent people by Nazi terror.”

Trump administration spokeswoman Hope Hicks told CNN Saturday that the statement didn’t mention Jews or anti-Semitism because it was intended to be “inclusive.”

Sen. Tim Kaine, D-Va., the former Democratic Party vice-presidential nominee, appearing after Priebus on “Meet the Press,” said of the White House statement: “This is what Holocaust denial is.”

Kaine said it was “not a coincidence” that Trump’s executive order barring people from seven Muslim countries was issued on the same day as the international observance of the Holocaust.

“I think all of these things are happening together, when you have the chief political adviser in the White House, Steve Bannon, who is connected with a news organization that traffics in white supremacy and anti-Semitism, and they put out a Holocaust statement that omits any mention of Jews,” he said.

Rep. Lee Zeldin, R-NY, a member of the House Foreign Affairs Committee, appeared to distance himself from the White House statement on the Holocaust.

“The Holocaust resulted in the murder of millions of innocent Jews, as well as millions of other innocent human beings. Never Again. Personally, I believe that statements about International Holocaust Remembrance Day should include a reference to Jews specifically as part of the message,” Zeldin said in a statement Sunday in response to a JTA query.

“The Holocaust stands as a solemn reminder of the dangers of hatred and racism in every form. Although time has passed, we still feel the effects of anti-Semitism and intolerance to this day.”