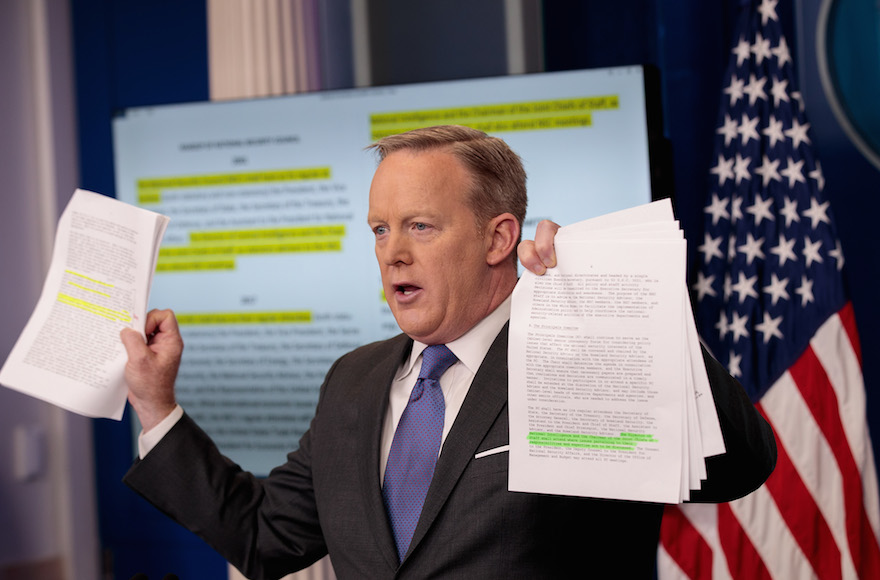 WASHINGTON (JTA) —  President Donald Trump’s spokesman said complaints about the president’s omission of Jews from a Holocaust commemoration statement were  “pathetic” and “disappointing.”

Sean Spicer, speaking Monday at the White House briefing for reporters, was asked about the complaints about the statement Friday marking International Holocaust Remembrance Day, which did not mention Jews.

“By and large he’s been praised for it,” Spicer said, although only the World Jewish Congress appears to have praised it, while a broad range of others raised concerns.

Reporters asked specifically about complaints from two groups otherwise supportive of the Trump presidency, the Republican Jewish Coalition and the Zionist Organization of America.

In response, Spicer noted the tensions between Israel’s government and the Obama administration, and Israeli Prime Minister Benjamin Netanyahu’s praise for Trump.

“There’s been no better friend than Donald Trump, especially after the last eight years, the tremendous respect he’s shown Israel, the Jewish people, and to suggest anything otherwise frankly is a little disappointing,” he said.

“The president went out of his way to recognize the Holocaust and the suffering that went through it, and to make sure America never forgets the people that were affected by it and the loss of life.”

Spicer listed Jews and Roma, gays, the disabled and priests as victims of the Holocaust.

The U.S. Holocaust Memorial Museum, without mentioning Trump, weighed in on the controversy on Monday afternoon.

“Millions of other innocent civilians were persecuted and murdered by the Nazis, but the elimination of Jews was central to Nazi policy,” the statement said.

“As Elie Wiesel said, ‘Not all victims were Jews, but all Jews were victims,'” it said. “The Holocaust teaches us profound truths about human societies and our capacity for evil. An accurate understanding of this history is critical if we are to learn its lessons and honor its victims.”

He said the statement was written “with the help of an individual who is both Jewish and the descendants of Holocaust survivors.” Asked if it was Jared Kushner, Trump’s son-in-law and a leading adviser, Spicer refused to say.

Since the United Nations launched the remembrance day in 2005, marking the anniversary of the liberation of Auschwitz in 1945, Presidents George W. Bush and Barack Obama have noted in their statements that the principal aim of the Holocaust was the genocide of the Jews.

Jewish critics have said that omitting Jews from Holocaust commemoration statements, wittingly or not, plays into the agenda of groups that seek to diminish the Nazi genocide of the Jews.

While the Nazis persecuted an array of groups because of their ethnic origins, professions, political beliefs and sexual orientation, scholars say only Jews and Roma were targeted for genocide. (There is some dispute about whether to class the mass murder of Roma as a genocide because, unlike with Jews, Nazi policies on Roma varied between regions.)

Since the controversy erupted, Trump administration spokesmen, including his chief of staff, Reince Priebus, have doubled down on the argument that it is better not to single out Jews in order to be “inclusive.”