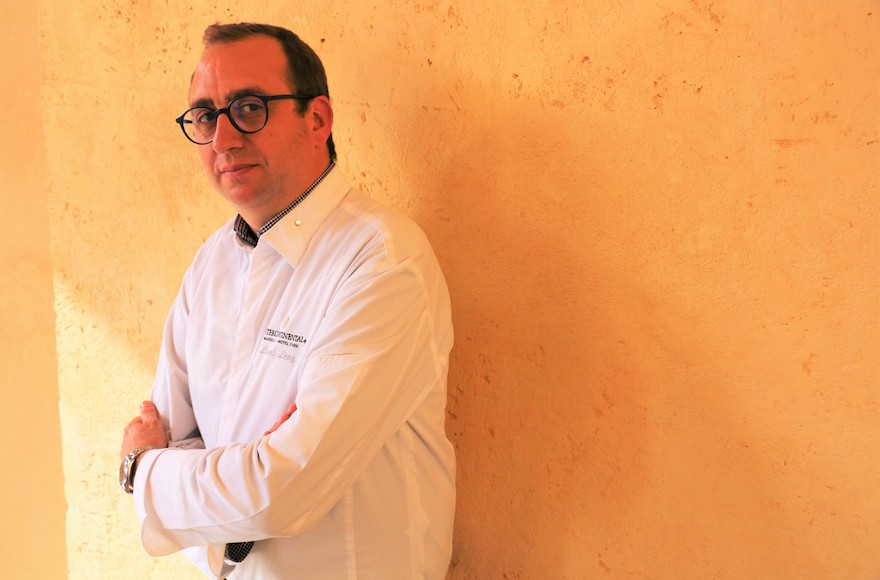 So when he walked into the kitchen at the InterContinental David Hotel’s Aubergine restaurant in Tel Aviv as guest chef he felt right at home. Levy — the head chef of the InterContinental hotel Marseilles’ Alcyone restaurant, which is considered a world leader in new Mediterranean cuisine — went right to work to bring his brand of world-class food to Israeli diners.

With Levy speaking French and the Tel Aviv kitchen staff mostly speaking Hebrew, the chef used what he called the universal language of cooking, including physical demonstrations, to indicate exactly how he wanted his recipes prepared.

Levy came to cook at the Israeli restaurant Jan. 16-19 as part of the first Kosher Taste of Michelin Festival at the hotel. During the event, three master chefs — Levy, Eberhard Lange of the InterContinental Berlin’s Hugos restaurant and Roger Rassin from the InterContinental Amsterdam’s La Rive — took over the David Hotel kitchen over the course of three weeks in January.

Levy is partial to using local ingredients, and working in Israel was no exception. He praised the “diversity of spices and vegetables” as well as the “exquisite art of bread” that he found in Tel Aviv.

“All these and more are a great source of inspiration for all curious chefs,” he told JTA through a translator.

Cooking kosher in the restaurant, which does not serve dairy, was more of a challenge, he said. Levy decided to cook only fish dishes, since under the rules of kashrut meat and fish cannot be mixed in one dish — and fish is his specialty. He added that the culinary restrictions of cooking kosher “eventually boosted my creativity in the most positive way.”

Levy’s grandparents are from Morocco, and although he did not have a very religious upbringing, he said his extended family celebrated Jewish holidays in a festive atmosphere with food as its centerpiece.

It was Levy’s first visit to Tel Aviv; he had once participated in a Jerusalem food festival. Visiting Israel gave him an opportunity to visit his father and stepmother, whom he said have lived in Israel for several years.

Levy received his Michelin star — the prestigious rating bestowed by the eponymous French guidebook on a select group of international restaurants — in 2005. He has lived in Marseilles for nearly 18 years.

He was asked if he feels anti-Jewish sentiment in France.

“Not at all,” Levy said, “and it is even less true in Marseilles, which is a cosmopolitan and multicultural city.”

As a “public figure” in Marseilles, Levy said, “I have never faced any problem of that kind.”

He said the November attacks in France on his friend and fellow French chef Stéphane Jégo of Paris by the Boycott, Divestment and Sanctions movement against Israel were “isolated,” though Levy added they were “serious and should not be underestimated.” He also said they should not be given too much attention.

Jego, the head chef at L’Ami Jean in Paris, was one of 13 chefs from renowned dining establishments around the world who came to a November international culinary festival in Tel Aviv. His Paris bistro was picketed for weeks and he was criticized harshly on social media for visiting the Jewish state. Anti-Israel activists also vandalized a restaurant in Portugal because its head chef participated in the same food festival.

Levy’s four days of five-course kosher tastings — at a cost of about $65 to $90 — were sold out. The diners left happy, he said, bringing him relief.

“The worst thing about being a chef is when guests don’t enjoy your dishes and your cuisine,” he said.