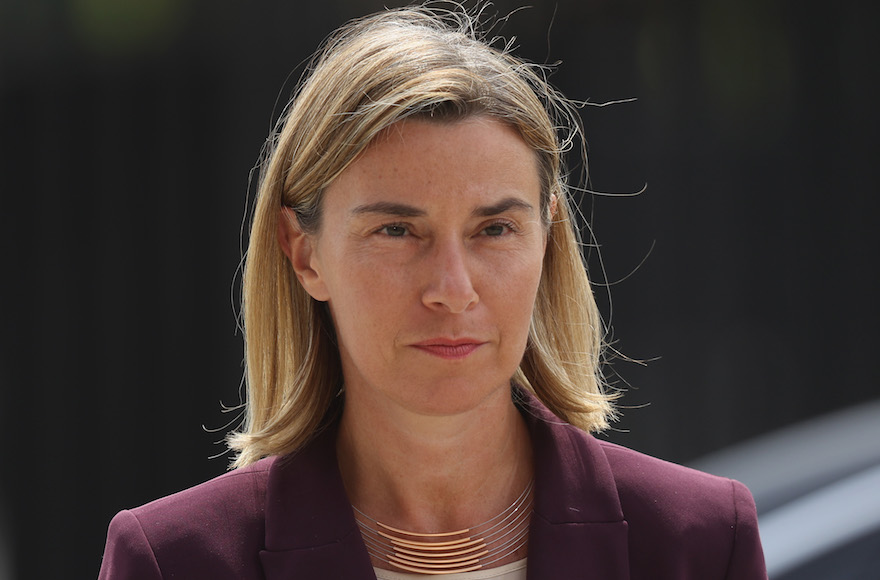 The statement Tuesday by Federica Mogherini, the high representative of the European Union for Foreign Affairs, came a day after the Knesset passed the so-called outpost bill, which retroactively legalizes thousands of West Bank settlement homes built on land owned by Palestinians.

“This law crosses a new and dangerous threshold,” she wrote, by “effectively authorizing the confiscation of privately owned Palestinian land in occupied territory.” If implemented, it would lead to “perpetual occupation and conflict.”

Separately, the European Parliament’s Delegation for Relations with Israel — a body responsible for maintaining and developing parliamentarian ties between Jerusalem and Brussels — called on the European Union not to hurt trade with Israel over this issue.

Fulvio Martusciello, the chair of the delegation, issued the call last week during a discussion about the economic implications of the European Union’s critical attitude toward Israel’s presence in the West Bank and other disputed territories.

“The European Union recognizes the importance of trade with Israel, and that is why we must be careful not to penalize the products that come from all parts of Israel’s territory,” Martusciello said, adding that boycotts are “criminal and violent.”

Martusciello’s organization scheduled the Feb. 2 discussion following the support of leading EU members states for the anti-settlement resolution passed on Dec. 23 at the U.N. Security Council, and amid efforts to realize EU regulations from 2015 requiring separate labeling for products from Israel’s disputed territories.

At the event, the CEO of the wine importer Casimex, Sydney Knafou, complained that these developments risked creating substantial financial damage to his E.U.-based business.

“Many of my peers, active in different European economic sectors, confirmed that their business will likely suffer serious harm from the passage and implementation of further regulations which distinguish between any territories currently controlled by Israel,” he said.