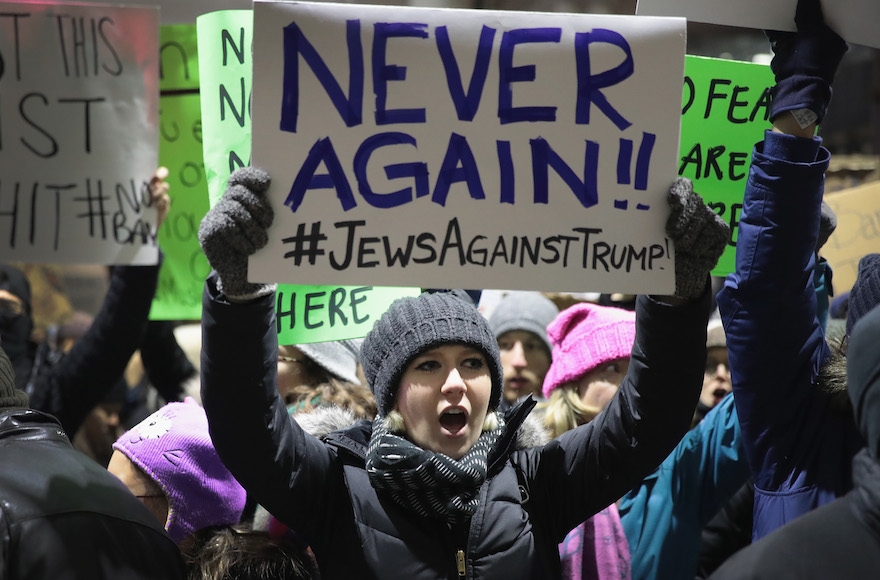 “We applaud the Ninth Circuit’s ruling, and hope that it sends an important message to the nation and the world that the United States is a nation that does not exclude people based on their faith and welcomes those seeking refuge,” the Anti-Defamation League said in a Twitter statement posted just minutes after the court ruled Thursday.

The tweet noted that the ADL had joined an amicus brief in the legal action originally brought by Washington state against the ban.

The unanimous decision of the 9th Circuit panel of three judges was a narrow one, upholding last week’s decision by a federal court in Seattle to stay the ban pending further consideration of its legality.

Also commending the ruling was the American Jewish Committee, saying on Twitter it was “an important moment for U.S. democracy and values.”

HIAS, the Jewish group advocating on behalf of immigrants and refugees, tweeted links to the decision. It also has joined an amicus brief in Maryland against the ban.

One of the HIAS tweets was a reminder that the battle against the ban is not over and may yet be upheld by the courts.

“We will continue fighting Pres. Trump’s executive order until we’ve re-secured the American tradition of #WelcomingRefugees to our shores,” it said.

We will continue fighting Pres. Trump’s executive order until we've re-secured the American tradition of #WelcomingRefugees to our shores.

HIAS is spearheading rallies on behalf of refugees to take place in nearly a dozen states this Sunday. One focus will be Trump’s executive order. Also backing the rallies are the ADL, the American Jewish World Service, the National Council of Jewish Women, and the rabbinical associations of the Conservative, Reform and Reconstructionist movements.

The Anne Frank Center for Mutual Respect called the court’s ruling “a victory for American freedom over Presidential tyranny.”

“The court has sided with refugees who thirst for hope over a president who yearns to hate,” the center said in a statement.

Trump appeared ready to take his case to reinstate the ban pending further legal review to the Supreme Court.

“SEE YOU IN COURT, THE SECURITY OF OUR NATION IS AT STAKE!” he said on Twitter.

SEE YOU IN COURT, THE SECURITY OF OUR NATION IS AT STAKE!

Neither Trump nor his team has explained what imminent danger cannot withstand the temporary stay on his order, which was issued about a week after he assumed office last month. No terrorist committing a crime on U.S. soil has hailed from any of the seven nations listed in the ban.

Sen. Chuck Schumer, D-N.Y., the minority leader in the Senate, called on Trump to give up on the executive order.

“President Trump ought to see the writing on the wall, abandon proposal, roll up his sleeves and come up with a real, bipartisan plan to keep us safe,” he said on Twitter.

Pres Trump ought to see the writing on the wall, abandon proposal, roll up his sleeves & come up w/ a real, bipartisan plan to keep us safe.