Jews gather at rallies across US urging support for refugees 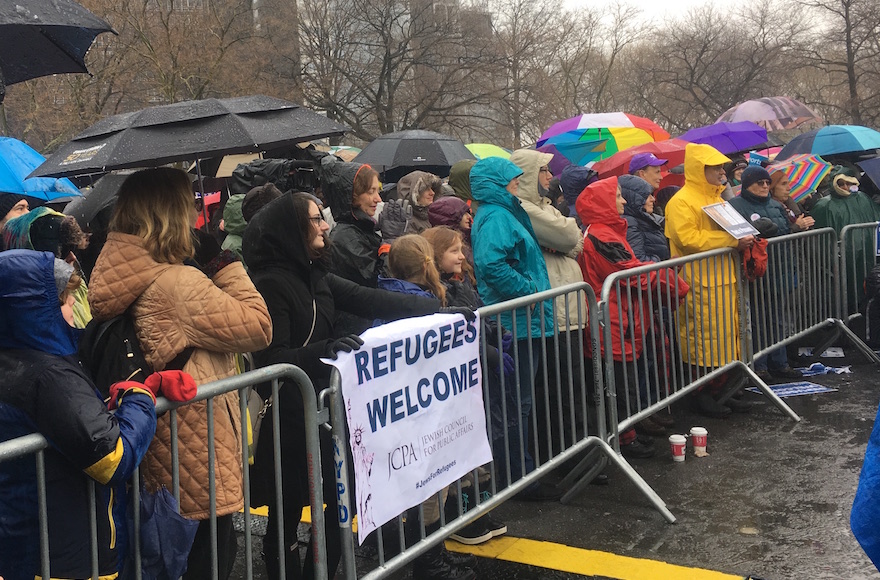 NEW YORK (JTA) — Over 100 years ago, Barnett Levine was greeted by the New York skyline and the Statue of Liberty as he arrived in the United States, having fled anti-Semitism and pogroms in his native Poland.

On Sunday, his grandson saw those very same sights when he joined about 700 others in this city’s Battery Park downtown at a rally protesting President Donald Trump’s executive order banning all refugees from the country for 120 days. 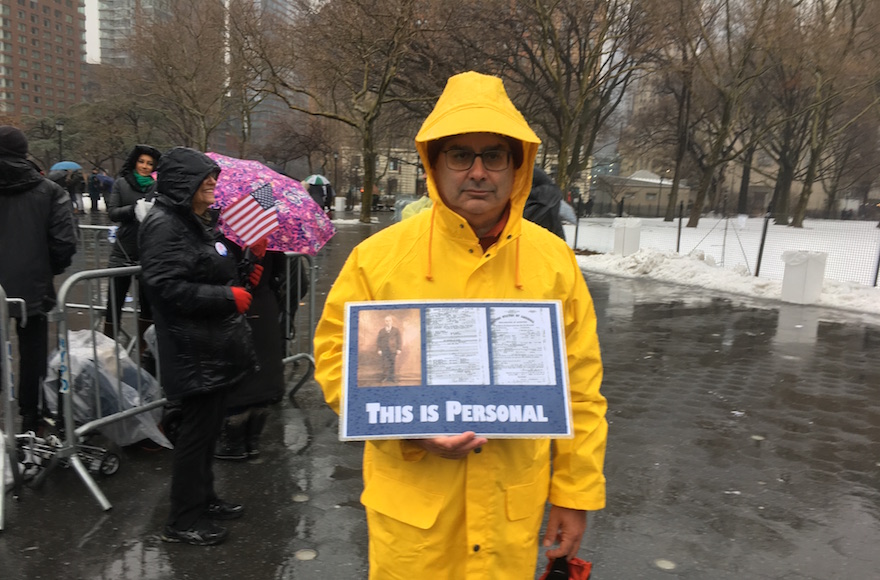 Harold Levine brought a poster to the New York City rally showing his grandfather, who immigrated to the United States over 100 years ago, fleeing anti-Semitism in his native Poland. (Josefin Dolsten)

The rally was organized by HIAS, formerly known as the Hebrew Immigrant Aid Society, part of an initiative by the immigrant resettlement group called the National Day of Jewish Action for Refugees.

The president issued his order last month, which also banned citizens of seven predominantly Muslim countries for 90 days. On Thursday, a federal appeals court ruling upheld a stay on the ban, a move praised by Jewish groups, including HIAS.

Thousands attended rallies on Sunday as part of the HIAS initiative, including in Boston, Washington, D.C, and other major cities, a representative for the group told JTA. The demonstrations had more than 20 co-sponsors, including the Anti-Defamation League, the American Jewish Committee, American Jewish World Service, the Union for Reform Judaism and the Conservative movement’s Rabbinical Assembly.

Mark Hetfield, the CEO of HIAS, said the rallies were a rare moment of joining together in support of refugees.

“I haven’t seen anything like this since I got my start [with HIAS] in 1989, which was at the height of the Soviet Jewry movement,” he said. “This is a galvanizing moment like that, but the difference is that then we were standing up for Jews, and now we are standing up as Jews.”

At the New York rally, participants braved icy wind, hail and rain to join in chants of “When refugees are under attack, what do we do? Stand up, fight back” and “Never again means never again for everyone” between speeches by rabbis and clergy members, politicians and leaders of Jewish groups. Among the speakers were Mayor Bill de Blasio; Rep. Keith Ellison, D-Minn.; Jonathan Greenblatt, national director of the ADL, and Sana Mustafa, a Syrian refugee.

In Boston, speakers at a rally with several hundred participants included City Councilor Josh Zakim, whose father, the late Lenny Zakim, was the longtime director of the New England Anti-Defamation League; Imam Faisal Khan, director of religious affairs at the Islamic Center of Wayland, and Fred Manasse, a child Holocaust survivor who was brought to the U.S. by HIAS.

Speeches — even those given by non-Jewish speakers — were peppered with references to Jewish history and traditions.

“In this city we believe we can live in harmony,” de Blasio said in New York.” It’s not perfect, but we believe we can do something that the whole world is struggling to do, that we can all be together … people of all religions and backgrounds, that is what we’re fighting for — doesn’t that fit beautifully the profound Jewish concept of tikkun olam, of healing the world?” 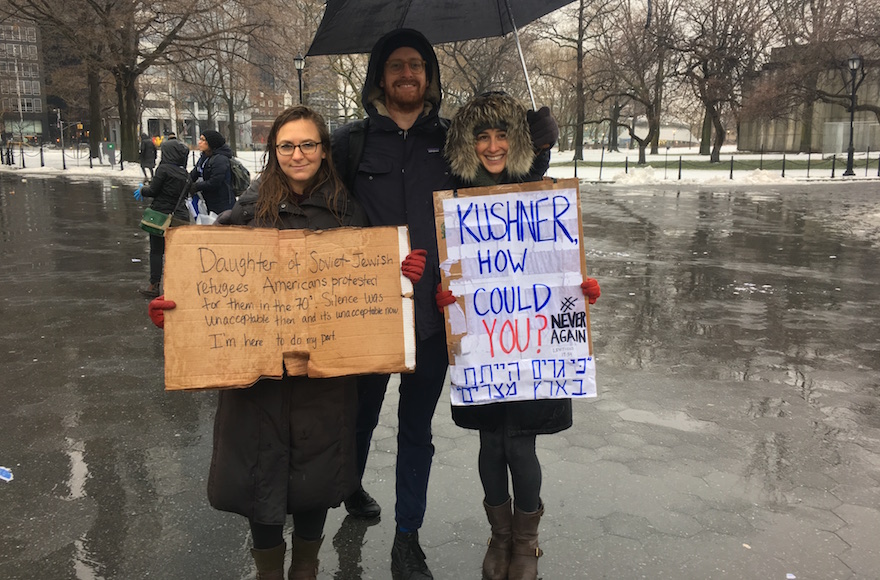 Elianna Kan, left, said the fact that her family members came to the U.S. as refugees from the Soviet Union motivated her to attend the New York City rally with her friends Will Hunt and Sarah Rosen. (Josefin Dolsten)

Ellison, who told JTA that the rally was “one of the main reasons” for his visit to New York, talked in his speech about the MS St. Louis, a ship with 900 Jewish refugees from Germany that tried to enter the United States and other countries but was turned away. He called the incident “a shameful time in our country.”

“All of our officials who worked with this stuff knew about it. We can’t say we didn’t know — we knew,” said Ellison, the first Muslim elected to Congress and a front-runner to lead the Democratic National Committee. “We didn’t want to get involved, we wanted to just mind our own business, we just kind of thought, ‘Oh, this is not our issue.'”

Jewish ritual featured prominently. At one point during the New York rally, representatives of 10 of the co-sponsoring groups went on stage and tore pieces of cloth, mimicking a Jewish ritual in which mourners rend their clothing. The tearing was done to remind attendees of refugees who had died before being able to reach safety, as well as those who are now facing dangerous circumstances. 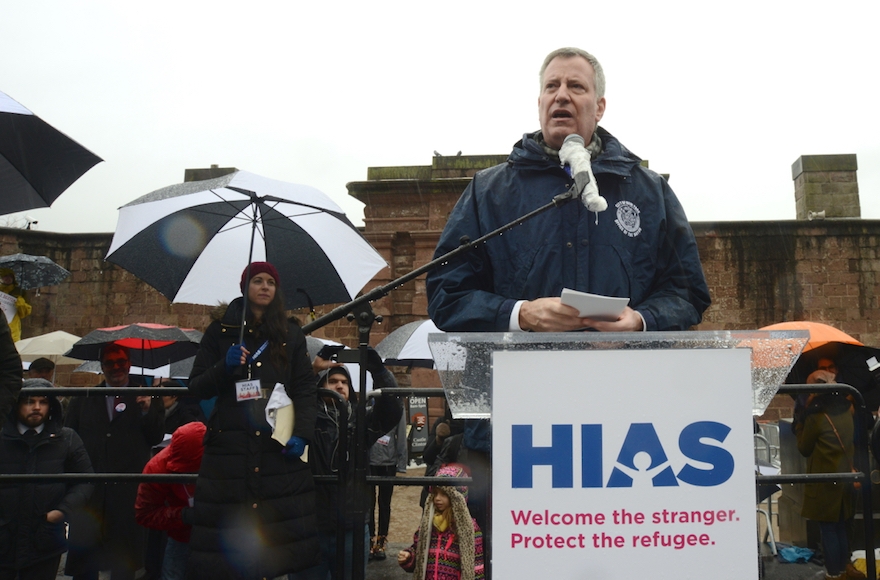 In addition to co-sponsoring the New York event, the ADL on Sunday also launched a campaign to rally opposition to Trump’s executive order urging people to share on social media their family stories of coming to the U.S. and tagging posts with #ThisIsARefugee.

“We remember that we were once strangers, too, that Jewish refugees fleeing Nazi Germany and oppression during the Holocaust were often denied entry with claims eerily similar to some of the claims that are being made today to deny entrance to refugees, and we think that’s wrong,” Greenblatt told JTA on the phone before the rally.

Participants at the rally said they were compelled to attend for a variety of reasons, both personal and historical.

Lisa Davidson, a 41-year-old professor who attended the New York event, said she saw historic parallels between the Holocaust and the civil war in Syria.

“What’s going on in Syria right now is criminal, and it is sort of reminiscent of what happened in the Holocaust in the ’30s and ’40s, and I think that we don’t want to repeat that again, and we don’t want to sit and say that we did nothing,” Davidson said. 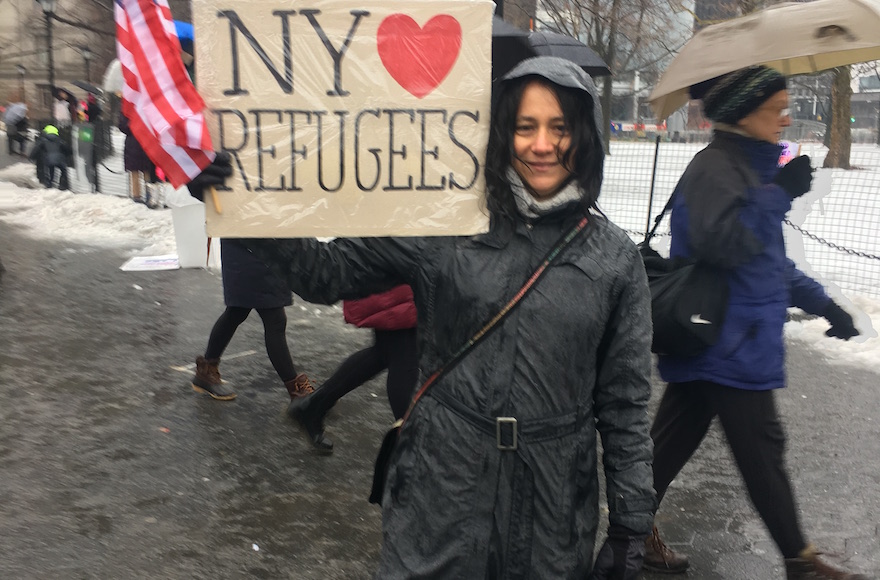 Lisa Davidson, seen at the New York rally, says she sees parallels between the Holocaust and the civil war in Syria. (Josefin Dolsten)

For some the motivation came from their family history. Levine, the marketing consultant whose grandfather immigrated to the U.S. over a century ago, brought with him a poster saying”This is personal” and showing a photograph of his grandfather and his immigration paperwork.

“I couldn’t not come here. The minute I heard about it, I thought I had to come,” he said.

Elianna Kan shared similar reasons for coming. The 28-year-old translator and journalist said her family came to the U.S. in the 1970s as refugees from the Soviet Union, receiving financial and logistical help from HIAS.

“I’m here and have the privilege of being born in a free country because people who were concerned with the plight of my family, whether or not they had a personal connection, were out there, and this seems like an even more extreme case,” she said. “It’s a different case, but the parallels are far too obvious to me.”