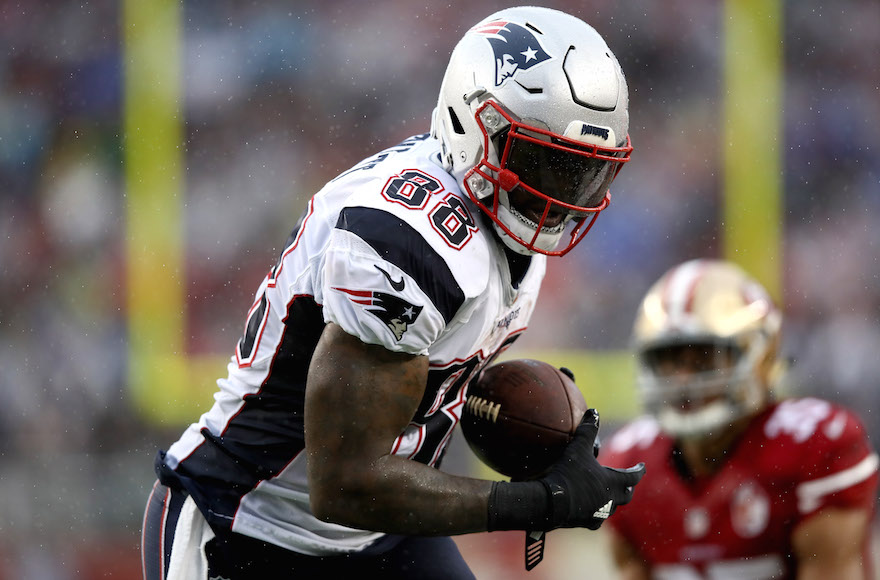 Martellus Bennett of the New England Patriots, shown here in a game against the San Francisco 49ers at Levi's Stadium in Santa Clara, Calif., on November 20, 2016, is one of the players slated to visit Israel. (Ezra Shaw/Getty Images)
Advertisement

JERUSALEM (JTA) — At least two more National Football League players, including a member of the world champion New England Patriots, have pulled out of a goodwill trip to Israel.

Martellus Bennett, a tight end for the Pats, reportedly pulled out of the trip over the weekend, joining his brother Michael, a Seattle Seahawks defensive end. Michael Bennett on Friday posted a photo of Martin Luther King Jr. on Twitter with the caption “Im not going to Israel.”

Martellus Bennett did not offer his own reasons for not taking the trip to Israel, choosing instead to retweet his brother’s letter.

Justin Forsett of the Denver Broncos also retweeted Bennett’s letter with a post saying: “For those who are wondering I will not be on this trip to Israel.” He later tweeted that he and his wife had decided weeks ago not to go on the trip because she is now eight months pregnant.

Asked on the @SheenaCNN Twitter page whether he would still be going on the trip if his wife was not pregnant, Forsett responded: “Im really uninformed on the issues over there right now I’m doing my best now to get up to speed then I can make an informed dec (decision).”

On Saturday, Michael Bennett tweeted that he would one day take his own trip to Israel and also visit Palestinian areas, and included a long letter explaining his reasons. Hours later, Miami Dolphins wide receiver Kenny Stills — who was also supposed to be part of the trip — retweeted Bennett’s letter, saying, “Couldn’t have said it any better. I’m in!”

Israel’s Tourism and Public Diplomacy ministries announced the trip on Feb. 5. The NFL delegation was to feature 12 current or former players.

They are to visit the Yad Vashem Holocaust museum in Jerusalem and the Black Hebrew community in the southern city of Dimona. Some of the players are expected to be baptized in the Jordan River.

An open letter to the delegation published Thursday in The Nation and signed by several pro-Palestinian organizations, including Jewish Voice for Peace, and by author Alice Walker and actors Harry Belafonte and Danny Glover, called on the players to reconsider the trip, saying it is part of an effort to “help the Israeli government normalize and whitewash its ongoing denial of Palestinian rights.”

Martellus Bennett announced after the Patriots Super Bowl victory that he would not join the team on its traditional congratulatory trip to the White House because he does not support President Donald Trump.