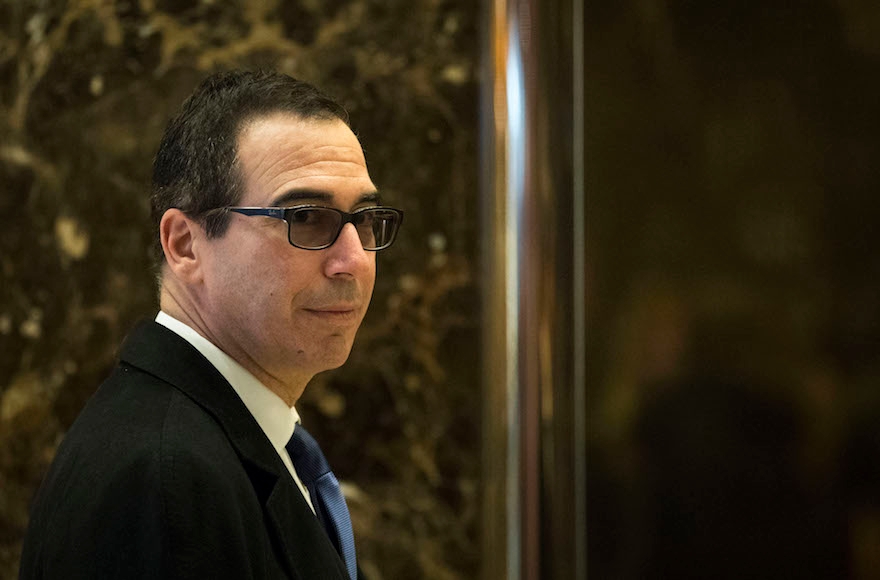 Mnuchin was confirmed Monday evening, 53-47, along party lines, with Joe Manchin of West Virginia the only Democrat to vote in his favor. He was sworn in the same evening by Vice President Mike Pence, with President Donald Trump present, in the Oval Office.

Democrats opposed Mnuchin, who was treasurer for Trump’s campaign, alleging that the bank he led, OneWest, used foreclosures during the financial crisis of the late 2000s to prey on vulnerable homeowners.

Trump said at the swearing-in ceremony that Mnuchin, who also was a Hollywood producer, would be a champion of the middle class.

“To all citizens I say Steven will be your champion, and a great champion,” Trump said. “He will fight for middle-class tax reductions, financial reforms, and open up lending and create millions of new jobs, and fiercely defend the American tax dollar and our financial security.”

Mnuchin said a priority would be to combat terrorist financing.

“I am committed to using the full powers of this office to create more jobs, to combat terrorist activities and financing, and to make America great again,” he said.

The Treasury under successive administrations have been a key venue for targeting terrorist finances through exposure and finances. The scrutiny has intensified since the implementation of the Iran nuclear deal a year ago, in part to assuage Israeli fears that sanctions relief under the agreement would facilitate Iranian backing for terrorist groups.

Shulkin also was confirmed Monday evening, but unanimously. Shulkin, a physician, was deputy VA secretary under President Barack Obama and is the only holdover from that administration.

Both Mnuchin and Shulkin are Jewish.