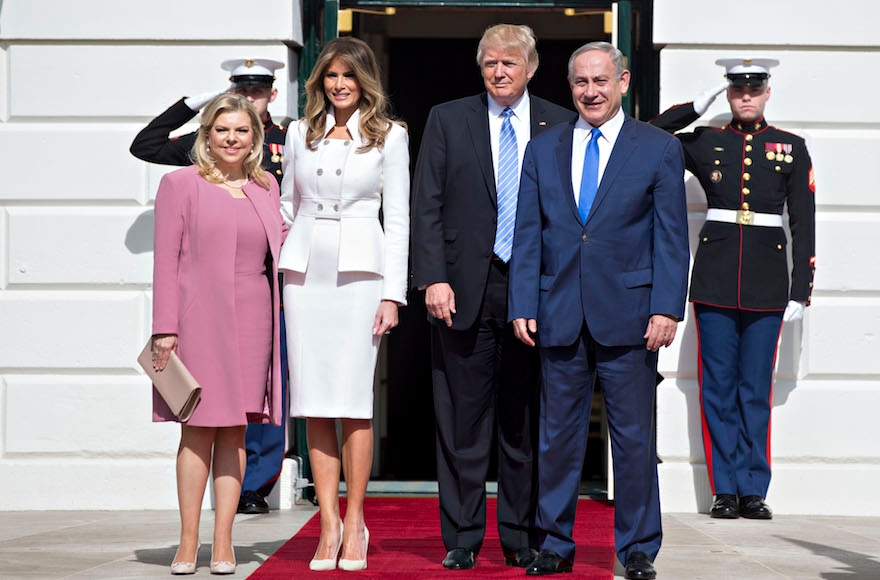 (JTA) — Liberal and centrist American Jewish groups expressed dismay following remarks by President Donald Trump that he “can live with” a one-state solution to the Israeli-Palestinian conflict.

Speaking Wednesday at a White House news conference prior to closed-door meetings with Israeli Prime Minister Benjamin Netanyahu, Trump was asked if he were “backing off” from the two-state solution, a pillar of U.S. policy under at least three former presidents.

“So, I’m looking at two-state and one-state and I like the one that both parties like,” Trump replied, going on to refer to Netanyahu by his nickname. “I’m very happy with the one that both parties like. I can live with either one. I thought for a while the two-state looked like it may be the easier of the two but honestly, if Bibi and if the Palestinians — if Israel and the Palestinians are happy, I’m happy with the one they like the best.”

The American Jewish Committee, while welcoming the “spirit of cooperation and friendship expressed at the press conference,” also reaffirmed its support for a two-state solution. Its statement quoted from a policy issued by the AJC National Board of Governors in December reasserting that “a two-state solution is the only realistic resolution to the Israeli-Palestinian conflict, as established through direct bilateral negotiations between the parties themselves.”

Trump’s comment came days after a senior White House official said a two-state solution was not a necessary outcome of peace talks between Israelis and Palestinians. If formalized, it would represent an official retreat from U.S. policy since 2002, when President George W. Bush said Palestinian statehood was a goal of peace talks. A two-state outcome was also the implied policy of Bush’s predecessor, President Bill Clinton.

Israelis and Palestinians have different conceptions of — and fears about — a “one-state” solution. The pro-Palestinian movement has promoted the idea of a single binational state of Jewish and Palestinian citizens, which many Israelis warn would erase the Jewish majority in Israel. The right wing in Israel has spoken of annexing most or all of the West Bank, but without extending citizenship to the Palestinians living there.

“The only alternative to that [two-state] outcome is one bi-national state and increased violence, with tragic consequences similar to the recent war in Syria,” Ami Ayalon, Gilead Sher and Orni Petruschka wrote in an op-ed in USA Today on Tuesday. The authors are principals of the Israeli nonpartisan organization Blue White Future.

Rep. Nita M. Lowey, D-N.Y., the ranking Democrat on the House Appropriations Committee, also urged the president to reaffirm a policy that “secures two states for two peoples — a democratic, Jewish state of Israel and a democratic, Palestinian state.”

“Today President Trump refused to lend his voice toward this goal. Not only were his remarks shameful, they were short-sighted,” she said in a statement. “A two-state solution for Israelis and Palestinians is the only means to ensure Israel’s long-term security and enable Palestinian aspirations for their own state. That is why Presidents from both parties, the vast majorities of the House and Senate, and the American people have consistently supported this objective, and why President Trump must as well.”

In its statement on Wednesday’s meeting, the Republican Jewish Coalition did not mention the president’s remarks on one- or -two-state solutions.

“Today’s meeting between President Trump and Prime Minister Netanyahu is a welcome sign that a new era has arrived for United States-Israel relations,” the RJC said. “It is in the interests of both our nations’ securities that we recognize the fundamental challenges facing the region, and their root causes. Whether it’s preventing a nuclear Iran, or the responsibilities of the Palestinians to come to the negotiating table in order to reach peace, we will only achieve our mutual goals if we stand united in the process. Thankfully, it’s clear that going forward there will be no daylight between the U.S. and our closest ally in the Middle East.”

World Jewish Congress President Ronald Lauder welcomed the meeting as “extremely positive” and called it “an encouraging sign that the historic alliance between Israel and the United States is back on strong footing.”