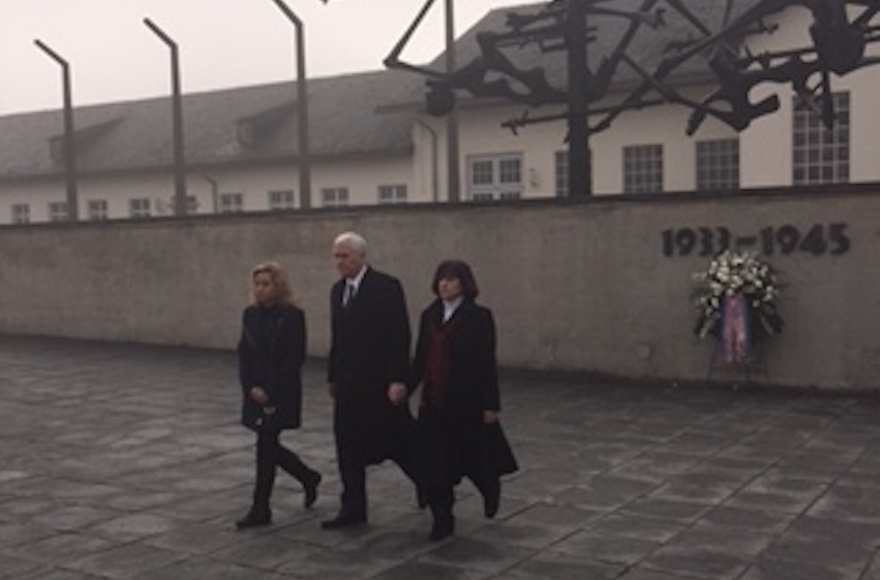 Pence, his wife, Karen, and their daughter, Charlotte, arrived at Dachau, located near Munich, on Sunday morning. Pence was attending the Munich Security Conference, and was scheduled to travel on to Brussels later Sunday for meetings with NATO and European Union officials.

They were greeted by Karl Freller, the director of the Foundation of Bavarian Memorial Sites, who read an introduction detailing the camp’s history. They were accompanied by Abba Naor, a survivor of Dachau who now lives in Israel.

Pence did not speak publicly during the visit.

The Pences visited the International Memorial at the center of camp, where they laid a wreath.  They also visited a Jewish memorial and a Catholic memorial on the grounds, and attended a service at the Church of Reconciliation, located on the camp grounds.

They also toured the barracks, a crematorium, and a gas chamber.

Naor described to Pence the work he did at the camp, and a typical meal, which he said was a slice of bread. “If it was a miracle that we survived, I don’t know” what it was, Naor said.

Dachau was established in 1933, and served as the model for all other Nazi camps. Over 200,000 people from across Europe were imprisoned in Dachau and over 41,000 killed. U.S. soldiers liberated Dachau in April 1945.

The visit comes after an outcry over the Trump administration’s statement issued last month for International Holocaust Remembrance Day omitted a specific mention of Jews.