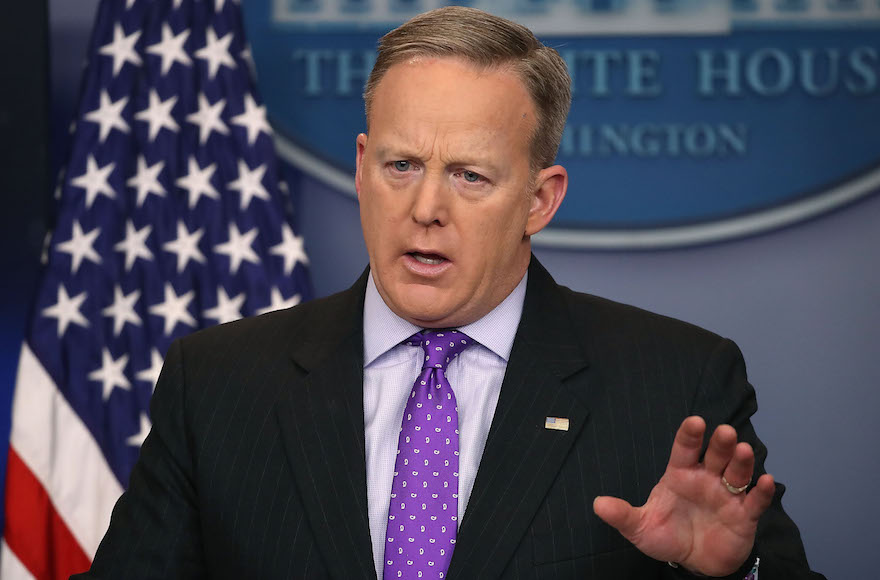 WASHINGTON (JTA) — The White House responded to a reporter’s query about the latest string of bomb threats called in to Jewish community centers by saying “these actions are unacceptable.”

“Hatred and hate-motivated violence of any kind have no place in a country founded on the promise of individual freedom,” according to a statement attributed to White House deputy press secretary Lindsay Walters that was shared Monday afternoon by NBC News correspondent Peter Alexander. “The President has made it abundantly clear that these actions are unacceptable.”

The statement did not specify that the threats targeted Jewish institutions, although it came in reply to a query about threats to JCCs.

Alexander posted Walter’s response on Twitter, adding, “@PressSec responds to my request for comment about wave of threats to Jewish community centers.”

BREAKING: @PressSec responds to my request for comment about wave of threats to Jewish community centers. @NBCNews pic.twitter.com/2Yq9atnAmt

Separately, Trump’s daughter, Ivanka, who is Jewish, condemned the threats in a tweet that alluded to the fact that the targets were Jewish.

“America is a nation built on the principle of religious tolerance,” she said. “We must protect our houses of worship & religious centers.” She ended the tweet with the hashtag “#JCC”.

America is a nation built on the principle of religious tolerance. We must protect our houses of worship & religious centers. #JCC

Earlier in the day, 11 Jewish community centers across the United States were targeted with false bomb threats, the fourth such wave of harassing phone calls in five weeks.

Last week, President Donald Trump was asked during a news conference about the prior JCC bomb threats and what the government’s response would be to “an uptick in anti-Semitism.” Although the reporter did not suggest Trump was anti-Semitic, the president answered by denying he is an anti-Semite and called the question “insulting.”

Shortly after, various Jewish groups, including the Anti-Defamation League and the American Jewish Committee, urged the White House to issue an unequivocal denunciation of the bomb threats and other anti-Semitic acts.

Earlier Monday, in a statement saying the latest bomb threats are “alarming, disruptive, and must always been taken seriously,” the ADL called on unnamed “political leaders” to condemn them.

“We look to our political leaders at all levels to speak out against such threats directed against Jewish institutions, to make it clear that such actions are unacceptable, and to pledge that they will work with law enforcement officials to ensure that those responsible will be apprehended and punished to the full extent of the law,” National Director Jonathan Greenblatt said in the statement.

Also Monday, the JCC Association of North America said that since Jan. 9, there have been 69 bomb threat incidents at 54 JCCs in 27 states and one Canadian province. All were hoaxes.

“Our centers have in place security protocols to ensure the safety of the program participants and facility visitors,” David Posner, director of strategic performance at the JCC Association, said in a statement. “All JCCs have now received the all-clear from local law enforcement and resumed regular operations, with a heightened level of security.”