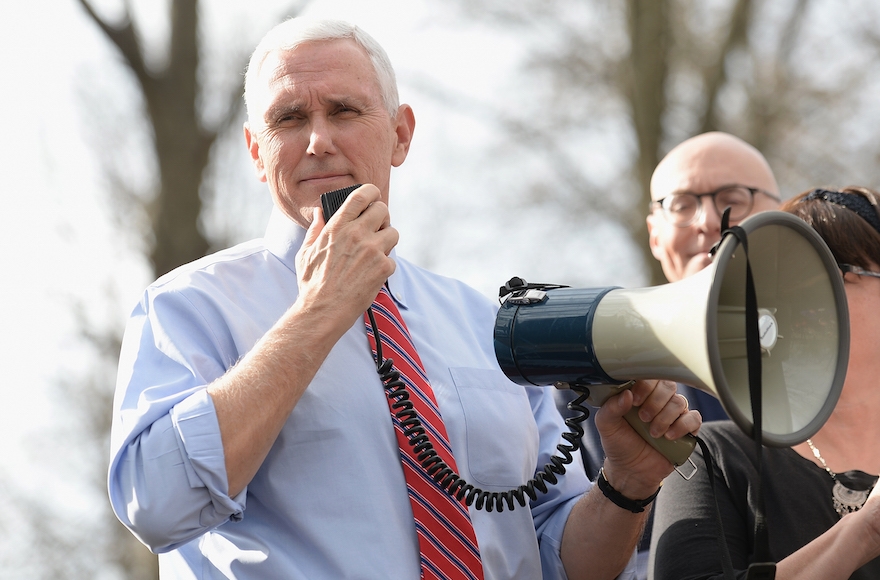 Pence in his address Wednesday at the Fabick CAT headquarters talked about the vandalism and a series of bomb threats leveled at Jewish community centers across the country in recent weeks. The day before, President Donald Trump condemned anti-Semitism in remarks at the National Museum of African American History and Culture in Washington, D.C.

On Monday, 154 headstones were knocked over or damaged in the older section of the 129-year-old Chesed Shel Emeth Cemetery in University City, where the majority of the burials were between 1890 and 1940.

“That, along with other recent threats to Jewish community centers around the country,” Pence said, “declare to all a sad reminder of the work that still must be done to root out hate and prejudice and evil. We condemn this vile act of vandalism and those who perpetrated it in the strongest possible terms.”

Photographs showed Pence in shirt-sleeves wielding a rake and picking up branches during cleanup efforts at the cemetery led by Missouri Gov. Eric Greitens, who is Jewish.

VP Pence and Gov Greitens also pitch in for a few minutes to help clean up the desecrated cemetery. pic.twitter.com/DcGnqfZyXW

University City Police investigating the vandalism have yet to determine whether it was a random act or a case of anti-Semitism, according to the St. Louis Jewish Light.

Andrew Rehfeld, president and CEO of the Jewish Federation of St. Louis, told the Jewish Light that the community should stop guessing at the motivations for these incidents and start looking at the effect.

“The chief culminating effect of all these incidents is a clear targeting of Jewish community institutions,” Rehfeld said. “That’s the pattern that is emerging and we need to contain it.”

He added that the federation is evaluating its ability to support “a much broader security function. We’re looking at a much more significant investment in it.”