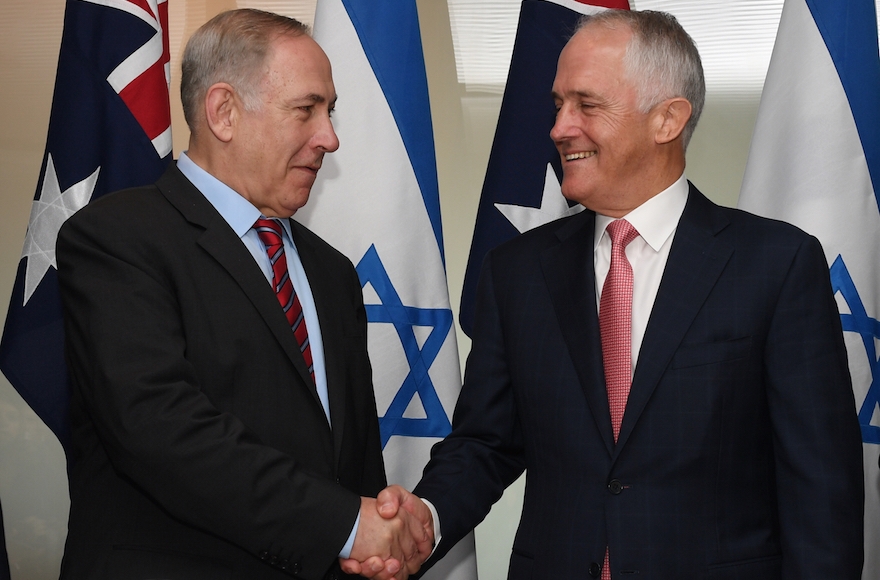 (JTA) — Prime Minister Benjamin Netanyahu of Israel and his Australian counterpart reaffirmed the strong relationship between their two countries as the former completed his landmark visit to the island nation.

The statement issued Thursday by Netanyahu and Malcolm Turnbull also said that “Australia re-affirmed its commitment to Israel’s right to exist as the nation-state of the Jewish people, in peace within secure borders, and its steadfast opposition to attempts to undermine Israel’s legitimacy. Israel thanked Australia for its consistent support in this regard. Both countries re-stated their support for a directly negotiated peace between Israel and the Palestinians. Australia affirmed its support for a two-state solution.”

Bilateral trade between the two countries stands at $1.1 billion. In 2016, Israel exported to Australia goods and services worth $700 million.

Several bilateral agreements and memorandums of understandings were signed between representatives of the two countries during the three-day visit, the first by an Israeli head of state.

On Wednesday, Netanyahu visited the Sydney Central Synagogue, where he attended an event with hundreds of members of the Jewish community. He also visited the Moriah College Jewish day school in Sydney, where he sat in on a Hebrew class and spoke to the students. Netanyahu called on all of the students to visit Israel.

Netanyahu invited Turnbull to visit Israel “at his earliest convenience.”