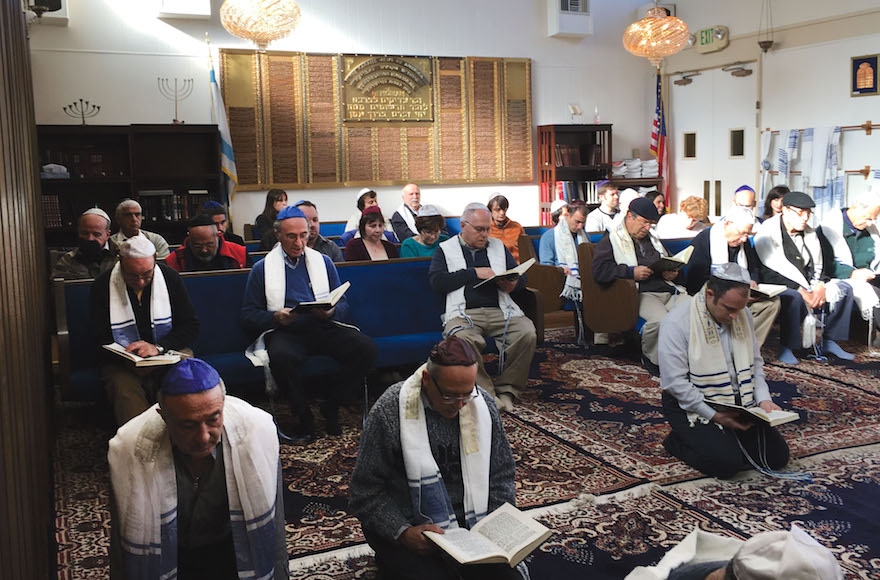 It is a custom among Karaite Jews to pray kneeling on the ground, as seen here in the sanctuary of Congregation B’nai Israel in Daly City. (Courtesy of Kararite Jews of America)
Advertisement

At the front of the sanctuary is an ark, and inside the ark are several Torah scrolls. There is a memorial wall at the back listing the names of the community’s lost loved ones. Near the entrance is a rack of tallitot, or prayer shawls.

But before you come in, you must remove your shoes, as Moses did when he approached the Burning Bush. Examine the rack of tallitot and you will find that the fringes are dyed, knotted and wrapped in an unusual way. In front of the pews is an open space covered in rugs. Some worshippers sit or kneel on the floor; when they bow, they touch their heads to the ground. The prayers follow a unique structure, and the sound is very Middle Eastern.

B’nai Israel is the only Karaite synagogue in North America, serving the Diaspora’s largest community of Jews carrying on the traditions of a movement that diverged from the rabbinic “mainstream” as far back as the eighth century C.E. About 800 members live within driving distance of the synagogue.

Karaite Jews differ from Rabbanite Jews, as Karaites call Jews who follow rabbinic tradition, in that they rely on what is written in the Torah and reject practices and interpretations derived from the oral law — the Talmud and other rabbinic literature. The two communities coexisted until the 10th century, when the (Rabbanite) sage Saadia Gaon denounced Karaites as apostates and sought to exclude them from the Jewish community. Relationships between the two Jewish communities have varied across time and place, but the initial antagonism has long colored the relationship.

In the Bay Area, where few Rabbanite Jews are aware of Karaite Judaism, the relationship is cordial, though not always close on an institutional level. But on a personal level, many Karaite Jews are involved with the wider Bay Area Jewish community. Many have had bar and bat mitzvahs in Rabbanite synagogues.

Still, B’nai Israel’s is a small, closely knit community drawn together by the Egyptian ancestry of many of its members as well as their Karaite practice. Like many other small Jewish communities, they are concerned about the future. Who will induct their children and other interested Jews into Karaite traditions?

To ensure that future, the congregation has embarked on a relatively small construction project that will have a large and visible impact on their community: They are renovating their existing 3,500-square-foot prefab building and creating a 1,000-square-foot Karaite Jewish Cultural Center,attached to the synagogue, which will serve as a combination education program, museum and social center.

There is a Karaite Heritage Center in Israel, but this will be the only similar institution in the Diaspora.

For a community this small, a lot is riding on the project.

“If this current generation of Karaite Jews in the United States fails, it’ll be very difficult to kick-start the movement in any organized fashion,” said Shawn Lichaa, a pillar of the local Karaite community.

Karaite practice is usually defined by its differences with rabbinic Judaism, whose acceptance of the oral law is considered foundational by Orthodox, Conservative and Reform Jews, even if Reform Judaism does not consider its rules binding. 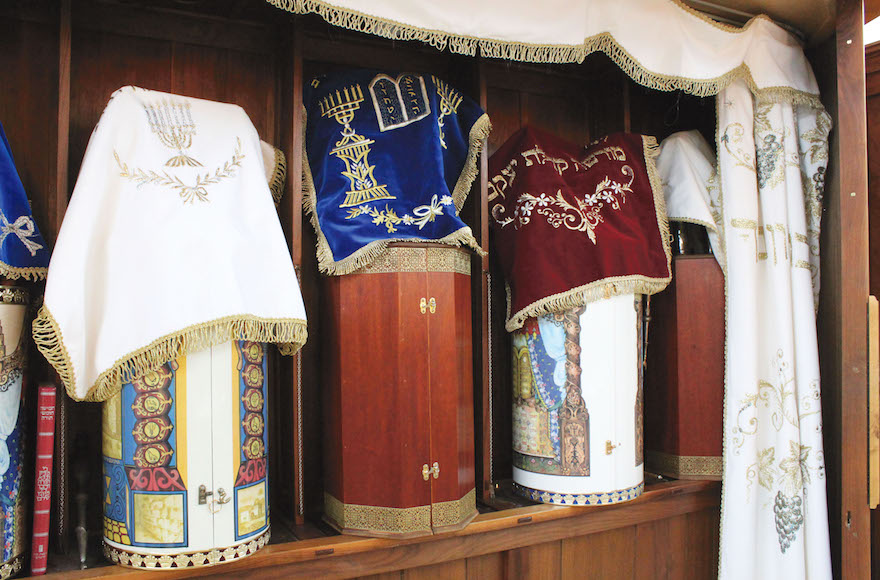 Karaite Torah scrolls are stored in the Eastern style, with the scroll enclosed in a hard case. (David A.M. Wilensky)

The rabbinic kosher practice of not mixing milk and meat, for example, is derived from fairly limited verses in the Bible that one should not cook a young goat in its mother’s milk. The rabbinic tradition expanded the prohibition to prevent the mixing and consumption of any kind of dairy with any kind of meat, including chicken, and created an array of laws about separating cooking utensils and waiting between eating meat and dairy.

In the Karaite view of kashrut, one may mix meat and dairy products that come from different animals, and each community — and individual — has autonomy to decide how strict or lax to be. Karaites also do not accept rabbinic loopholes that ease various Shabbat restrictions. Karaite Jews have embraced some Rabbanite traditions, such as b’nai mitzvah, while rejecting others, such as celebrating Hanukkah (which marks events that occurred 1,000 years after those described in the Torah).

Karaites also include a blue strand in their tzitzit, giving their tallitot a distinctive look — and informing the name of A Blue Thread, Lichaa’s long-running blog on Karaite Judaism.

In the B’nai Israel sanctuary, most women sit off to one side, though there is no mechitza to separate them formally from the men. As each Karaite community is empowered to set its own standards, American mores rubbed off on the community, and some women now prefer to sit in the main area.

Today there are an estimated 30,000 Karaite Jews in Israel, 1,500 in the United States and small communities in places like France, England, Turkey and Russia. But until the mid-20th century, many lived in Arab lands. For centuries, one of the most prominent Karaite communities in the world was in Cairo, where the first Bay Area Karaites came from. Cairo once had a Karaite quarter of about 5,000 people adjacent to the mainstream Jewish quarter. Relations between Karaite and Rabbanite Jews in Cairo were close; the Cairo Genizah, a vast store of Jewish writings discovered in a Rabbanite synagogue in Cairo in the 19th century, included a number of Karaite documents.

In what Karaites sometimes call “the second exodus,” they left Egypt en masse during the last century after Israel became a state in 1948. More left after the 1956 Sinai War. During the 1967 Six-Day War, the remaining Jewish men in Egypt were put in camps, where they were held for over two years; they were the last to leave. Over the years — mostly because of relatives already in the Bay Area — many of the Egyptian Karaite Jews wound up here. 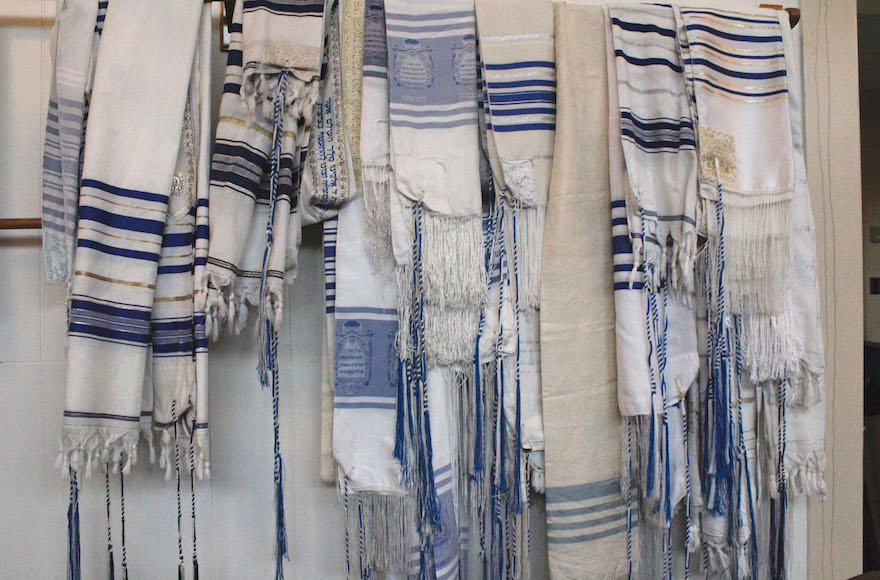 In 1994, the Bay Area Karaite community bought the Daly City building from an existing Congregation B’nai Israel that was closing. The Karaite congregation adopted the name B’nai Israel because it was already painted on the side of the building.

The cultural center would have been no more than a dream were it not for the fortuitous union, in their 60s, of David Ovadia and Maryellen Himell-Ovadia, who are leading the fundraising and renovation efforts. Ovadia is a Karaite Jew by heritage and a structural engineer by training; Himell-Ovadia is a former member of San Francisco’s Congregation Emanu-El and an experienced fundraiser.

“During that time, a lot of my other uncles and everybody else was feeling the pressure and everything that was going on in Egypt,” he said.

While others in his community have feared for its future, Ovadia’s faith never wavered.

“I never doubted that this is going to continue,” he said. “This is making sure that there is going to be a tradition kept alive. We will live for a thousand years and more.”

Himell-Ovadia sees herself as part of a bridge between the Karaite and mainstream Jewish communities of the Bay Area — a bridge that she hopes will grow.

“This is not just about improving or facilitating things within the Karaite community, but to build bridges to the larger world and to make this a welcoming place for others who want to come and learn about this unique culture within the branches of the Jewish family tree,” she said.

With groundbreaking set for the end of this month, the B’nai Israel community has already raised $1.1 million of its $1.2 million goal. The cultural center campaign is an approved grantee of the San Francisco-based Jewish Community Federation’s donor-advised funds, though it only accounts for a small percentage of the money raised. In about six weeks, the congregation will move out of its building and be hosted by other congregations until the High Holidays, when it expects to be back home again.

A Blue Thread blogger Lichaa, 37, is also the creator of the Karaite Press. Launched in February 2016 with the publication of a 12th-century Karaite commentary on the Book of Esther, the Karaite Press aims to make great historical Karaite writings — many of them written in Arabic and until now locked up in manuscript form — available to the global Karaite community and the public at large.

Lichaa, a San Francisco native and the son of Karaite parents from Cairo, grew up in Foster City, where he attended Hebrew school at Peninsula Sinai Congregation.

In Cairo, members of the Karaite community lived close together. But, Lichaa said, “When we came to the U.S. we didn’t have proximity, a central place where a critical mass lived where we could do education with our own teachers. The easiest thing to do was join local synagogues.”

Today, the Daly City congregation offers some education programs, but none specifically for kids.

“We do train them in prayers, one on one. I do some of that,” Lichaa said.

A recent bar mitzvah at B’nai Israel was a major affair, drawing a crowd of 150 to the small sanctuary.

The new center will offer a range of programs, “everything from cooking classes, history classes, to arts,” he said. “I see a Tuesday night open house where we’re open to the community. People can drop by, there will be food and beverages. And maybe Thursday nights we’ll have a specific learning opportunity.”

Lichaa is working to make sure all of the classes will be live-streamed, making the learning available to a wide audience.

The center also will include a rotating exhibit of Karaite Torah scrolls, art, manuscripts and the like.

Lichaa views himself as Jewish first and Karaite second.

“I made an active decision that my preferred form of Judaism is Karaite Judaism,” he said. “If you’re an Orthodox Jew, I understand why you follow the rabbinic tradition. But for everyone else, I wonder why Karaite Judaism can’t be one of the menu options.”